This week’s sobering Frontline documentary “Divided States of America” on PBS opens with a scene of Republican Donald Trump visiting President Obama at the White House two days after Trump won an upset victory over the Democratic candidate Hillary Clinton in November.

On screen, the two men sit relatively calmly but are seen through wildly swirling camera images, the kind of “B Roll” excess that usually gets cut before reaching air.

From different angles at floor level, different cameras jostled for position and the images are spliced together to dizzying effect.

Producer, director and writer Michael Kirk was asked what mood he meant to convey.

“That it’s maybe a little uncontrollable,” he said. These jarring visuals, he said, helped to “convey dissonance.”

Four hours later, at the end of the two-part series, Kirk completes his framing device with the same scene shot in a different way from a different point of view: A black-and-white still photo from a high angle in the back of the room.

The shot gradually pulled back from the tense faces of the two Presidents to show the wider setting below. It suggests context and perspective with a little less frenzy, an “iris-out” effect as old as silent film—and still as powerful.

“You’re in something historical,” Kirk said of the evocative black-and-white still images which fill most of his segments.

Certainly Kirk has done a fine bit for short-term history with Trump’s inauguration set for today and people still stunned by his rise. Kirk pared and consolidated eight-plus years—from Obama to Trump—into an attempt at coherence and understanding.

His broad sweep covers the economic crisis, the racial tensions and the reactionary obstructionism of the Republican party to, among other things, healthcare legislation.

Kirk’s polished and impressionistic effort explains Trump’s unlikely ascent in a serious way that historians will study in future decades to understand how things got the way they did in a perilous era.

The parallel narrative is the diminishment of Obama from “hope and change” candidate to discouraged realist.

“I’ve lost my narrative,” Obama says, according to author Ron Suskind. “I have no narrative.” Later, worn down by battles over the economic bailout, mass murders and so much more, Obama criticizes Trump and the Republicans for a dark, pessimistic vision.

Kirk’s script paints Obama as trusting and naïve at his 2009 inauguration and unaware of the bitter resentment of his enemies.

Even at four hours, “Divided States” is hardly comprehensive. Clinton is rarely shown or even mentioned. Although the documentary credits right-wing radio for Trump’s success, it does not even mention Fox News Channel, the cable news outlet that has become Trump’s sanctuary TV network.

Instead, Kirk uses audio clippings from AM oracles like Rush Limbaugh, interspersed over related visuals.

Also heard often is the harsh braying of Mark Levin, a syndicated right-wing broadcaster with a distinctive snarl who moves from issue to issue, beginning with Obama’s campaign against John McCain in 2008.

“This governor from Alaska, she’s something else!” Levin says of the vice-presidential candidate Sarah Palin. “. . . We have to defeat the Marxist (Obama) and then we have to take back the Republican Party . . . This is not the constitutional government that our founders had in mind . . . John McCain is a disaster, a complete unmitigated disaster! . . . $450 billion down the crapper! . . . This is our Waterloo! . . . (Obama) must be defeated! . . . He must be driven out of Washington! . . . Liberty’s on the line! . . . The Constitution and the Bill of Rights are on the line . . . I despise these people! . . . Obamacare is a cancer! . . . We could use a good government shutdown right about now . . . The RNC needs to be fumigated. Get rid of all the cockroaches!”

Shrill as he sounds, Levin echoed much of the invective that was playing in Trump’s head.

“We want that voice,” Kirk said, “those hours of right-wing radio that Trump listened to.”

Backing this is Trump aide Kellyanne Conway, who explains Trump’s perfect pitch for the radio ranters.

“He talked about illegal immigration in the way they had been doing it for years,” she said.

The documentary frequently returns to Palin, treating her not so much as a political lightweight but as a prophet of how Tea Party insurgents would soon damage the careers of House leaders John Boehner and Eric Cantor in a hostile takeover of the Republican party.

“She lit the fire,” Kirk said, comparing the movement to a “bog fire” in Ireland that burns unseen underground before a sudden change.

“Once in a while, it breaks out and consumes everything,” Kirk said.

Kirk’s script paints Obama as trusting and naïve at his 2009 inauguration and unaware of the bitter resentment of his enemies. Visually, the most jarring scenes are those of death, one a black-and-white still photo of the corpse of Trayvon Martin.

Another disturbing moment shows visually and through audio of the gun murders 20 school children and six adults at the Sandy Hook school in Connecticut in 2012.

While an alarmed voice on a 9-1-1 call reports the shooting, gunshots are heard in the background.

Mark Barden, father of one young victim, tells the camera what it was like to wait for news from inside the school until hearing this announcement.

“If you haven’t been reunited with your loved one yet,” he recalls, “you’re not going to be.” The segment ends with Barden at the White House, remonstrating with other families and the president after the Congress refused to take even minor steps toward gun safety legislation.

All the while, lurking in the background, is Trump, who joined the political discussion in 2011 by pushing the scurrilous lie that the nation’s first African-American president might not be a real American and, therefore, illegitimate to serve.

After Obama wins reelection in 2012 over Mitt Romney, Trump takes to Twitter tweeting.

“We should march on Washington and stop this travesty,” Trump writes. “We should have a revolution in this country.”

Barely audible on the soundtrack, right after the narration of Trump’s tweets, is the sound of a bird tweeting, twice. It’s not Kirk’s only audio sweetener.

Under narration and sound bites come the low notes of stringed instruments—like moans and groans, almost.

Sometimes, an event is underscored with discordant piano notes. Other sounds include background of sirens from city streets and insistent telephones ringing from distant rooms.

One of few upbeat moments is the playing of “Keep on Rocking in the Free World” by Neil Young which is heard in 2015 when Trump rides down the escalator with his wife at Trump Tower to insult Mexicans and declare his improbable candidacy.

The most poignant musical note is a clip of Obama singing “Amazing Grace” in a South Carolina funeral service after nine black church-goers were slaughtered in Charleston by a white racist with a gun who wanted to start a race war.

Kirk, who joined Frontline at its inception in 1983, is a multiple award winner and is finishing up his next project, “Trump’s Road to the White House,” to appear next week on PBS.

Come what may in the new administration, Trump is likely to give Kirk plenty of compelling material for more unsettling and well-crafted documentaries. 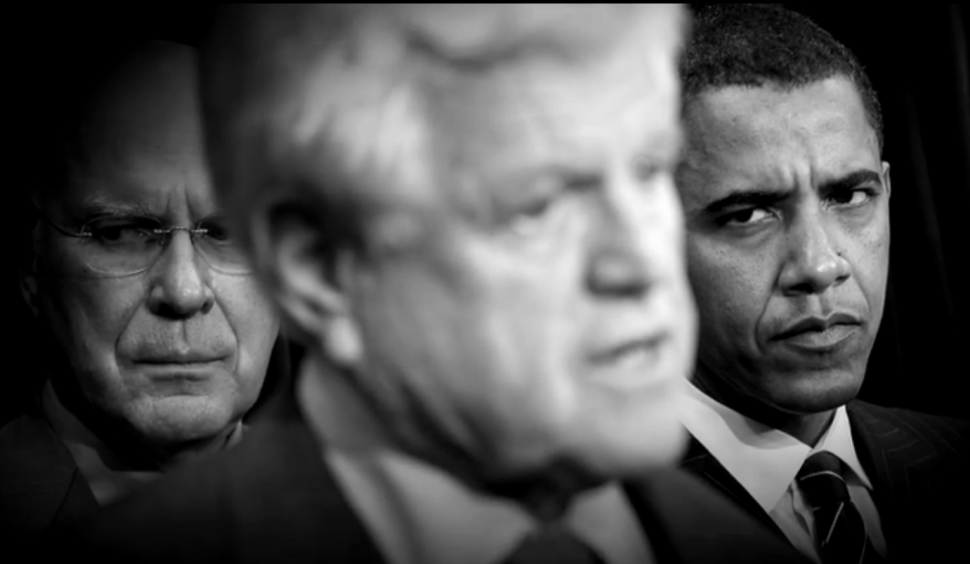