It’s plenty fun to watch Tom Hardy’s James Keziah Delaney make Michael Kelly’s gun-toting American spy Dumbarton, Mark Gatiss’ bloated Prince Regent and Jonathan Pryce’s corrupt East India Company exec Stuart Strange battle it out over a pile of rocks in the Pacific Northwest week after week. But try to remember fellow Taboo watchers, that we all know how the fight over Nootka Sound really shakes out in the end: Vancouver is, after all, Canada’s favorite smoke-free city. This non-debatable, non-alternative fact is of the utmost importance because a show like Taboo, which is rooted in real life history and then spiced-up to taste with flashy bits of wild fiction, can only keep up the suspense so long when we all know how the story ends. So, what’s the point of rehashing old feuds? It could be that show writers are going for the“greatest story never told” shtick, wherein the bloody battles of Delaney’s holy trinity of potential assassins are a lot more fun when told via Tom Hardy & co. than they ever were in the school books. Hooray for fiction! Hooray for Tom Hardy!

A show like ‘Taboo’, which is rooted in real life history and then spiced-up to taste with flashy bits of wild fiction, can only keep up the suspense so long when we all know how the story ends.

We begin this week with Lorna in deep trouble for defending her honor against a pretty un-honorable man. (My confirmed source is one of the East India’s minions, who outright says “we have so much shit on the Duke of Richmond.”) There’s little Delaney can do to stop the wheels of justice from turning, so Lorna ends up behind bars, but only temporarily. While in the slammer, she’s handcuffed, hoved into a backroom wearing nothing but her nightgown, and into a meeting with Coop—whose negotiation tactics are themselves a punishable offense. While his lacky lays out an array of documents on a table, Coop violently undresses Lorna while explaining to her that she can (and should) contest her late husband’s will on the grounds of insanity, sign over her share of Nootka to the British crown, or else hang for attempted murder. But don’t worry, she’ll be given 1000 pounds “for her trouble,” a.k.a. enduring a sexually assault. But Lorna holds her ground, even while agreeing with Coop that “James Delaney is in league with Satan.” And despite her initial hesitations, she’s warming to the idea of joining her step son’s “league of the damned.”

Meanwhile, Strange is currently trapped in a prison of his own, outwitted by both Delaney and the Crown, who reneged on their unspoken “common cause” agreement to team up against the Americans for the greater good and have left the East India out of the agreement they served up to Lorna. We don’t see much of Strange this week, but watching Pryce convulse on screen while uttering the following words about Delaney was satisfying enough: “He’s turning London into his own private bear pit, and what are we? The bear or the dogs?”

History Lesson #1: Sex Magic It is to be expected that while watching a series called Taboo sex will undoubtedly happen on screen. But since assault and rape are sadly well-represented on television these days, there’s little justification for subjecting not one but two characters to a fate that too many women on the small screen are forced to suffer already. Nevertheless, this week Zilpha is violated in her sleep by her brother, whose incantations muttered into a fire rouse her into a wet dream. As the Telegraph’s Rebecca Hawkes points out, sexual possession was actually a fad of the time. A precursor to Hypnotism, the pseudoscience Mesmerism began in late 18th century with the findings of a German doctor named Franz Mesmer, who believed that redirecting forces within the body by way of magnets would heal a person from hysteria. Apparently offshoots of Mesmer’s practice also involved possession from afar. In Zilpha’s case, not only is she taken by her brother in her sleep, but her husband wakes her and has his way with her as well. The scene does, however, provide another small window into the supernatural forces creeping into our storyline and hiding beneath the surface in Delaney.

As for our main man, aside from the threat of death around every corner, his biggest problem this week is trade merchandise, specifically gunpowder. Godfrey, whom Delaney has blackmailed to bring him all the East India’s off-the-record secrets, tells him that in order to trade with the local population of Nootka he’ll need gunpowder. Since Britain is at war, production is currently controlled by the Crown—who have conveniently placed his name on a sales blacklist. “They can’t kill you, but they will crucify your name and crucify all those around you,” Godfrey tells Delaney, whose reply is more than a little heartbreaking: “I don’t keep anybody around me that doesn’t deserve what they get.” Godfrey is not excluded from that bunch, which firms up any and all suspicion that Delaney (in addition to pretty much everyone on this show) is simply the worst.

History Lesson #2: DIY Explosives Meet Cholmondeley—that’s a mouthful, isn’t it? The nitrous oxide-fiending Royal Society chemist has some less than scientific theories about ejaculation—“semen not ejaculated turns to poison,” he tells Delaney, along with the claim that not cumming will give you the mental capacities of an ape—is portrayed perfectly by Tom Hollander. In a lecture at the college, he demonstrates for us that when chlorine gas is added to a solution of sal ammoniac and exposed to “sunlight, or heat, or mere emotion” it goes boom. (Atticus finds a very good use for this later in the episode.) Delaney enlists Cholmondeley with yet another bag of gold from his seemingly endless supply of spoils from Africa to help him make, you guessed it, gunpowder. He drags him out to the same farm where he’s stashed his young brother (more likely son) and they have a frank discussion weighing the pros and cons of whether it’s best to use poop, pee or saltpeter to make the powder. Since saltpeter is quickest, Delaney will need to swipe some off the supply of his enemies at the East India.

But before he can do so, he’s ambushed into another knock-down-drag-out fight with a giant assassin, this time sent by the Americans. There are only two take aways here: 1) we learn that Delaney has no issue with literally gutting a man. (It’s quite gruesome, even though we only see the aftermath in a single flash, but wow.) 2) That his brother/son witnesses the horror from an upstairs window, which means at some point Delaney will have to explain his reasons for pulling out a man’s intestines through his abdomen while he’s still alive to a child.

In the real world, killing a man like Delaney did will get your thrown in jail and called a psycho. In ‘Taboo’-land, it means you get invited to a society ball….

In the real world, killing a man like Delaney did will get your thrown in jail and called a psycho. In Taboo-land, it means you get invited to a society ball, not only because you lived but because you’ve impressed your would-be assassins. Finally, we get to meet Carlsbad, who it turns out is the Countess Musgrove. And so, it’s off to the dance we go with Lorna.

But a bit of business to tend to before we get dancing. Delaney plans to execute his robbery of the East India’s saltpeter stash at the docks at the same time as the ball. For this, he enlists Helga, who I must point out mentions Winter’s name for the first time ever, possibly verifying her existence as a real person. Or not, Delaney could be dreaming it, and I really standby my earlier position that it’s completely bizarre that the girl sleeps in his basement. But the real reason he’ll need her is so that she can collect the urine of her prostitutes and clients, bottle them up in barrels, and hand the off to Atticus who will ship them up river for Delaney’s gunpowder initiative. This is a super gross task, and so I’m really sorry Helga. Atticus will also lead a team of his underbelly sidekicks in breaking into the docks.

And back to the dancing. It’s a raucous affair indeed. Cholmondeley is there with bags of nitrous oxide in tow. There’s booze, there’s nakedness, but before the night descends into an orgy Delaney and Zilpha must clear the air. It’s more than coincidence that they’ve both ended up at the same party, which means the Americans probably know more about their past than we do at this point. Dumbarton, who breaks up their lover’s quarrel in the garden, confirms that he knows about their unorthodox relationship, and tells Delaney, “Love is now part of the deal we are offering.” He says Carlsbad can offer them safe passage and anonymity in the New World, in exchange for Nootka we assume.

Back at the party, we learn that Lorna may have her own plans for Delaney. “If I were to have intentions regarding James, would I need to be wary of you?” she asks Zilpha. “No civilized woman would have intentions of him,” Zilpha replies, along with the now-obligatory, “and I’m his sister” quip. I’m not sure why she even bothers with excuses at this point, or at least not after Thorne’s very drunken, very public proclamations at the end of this episode. So yes, Thorne finally gets it all out, along with another tirade of racial slurs. This guy is too much. He and Delaney trade fistacuffs, Delaney drags him out on his ass to the patio, and Thorne finally says what we all know but have just been waiting to hear out loud: “You fucked her!” Cue a sea of awkward faces and everyone processing the incest. And then he challenges Delaney to a duel, to the death…at dawn.

I still have questions…

Among many, many things, Delaney doesn’t enjoy crowds. The gropey hands of Carlsbad’s party guests are enough to trigger some serious vertigo and social anxiety for our hero. Some day soon, I hope, this show will answer some questions about its main character and his past.

However, we did learn that Delaney discovered and perhaps mastered some innate magical skills while in Africa. So, he’s a wizard? I am very excited to see whether he will use his magic for good (destroy the East India) or bad (night sex is hot, but not when you don’t ask for consent).

I’m pretty sure enough nitrous oxide will turn you into an ape, Cholmondeley. 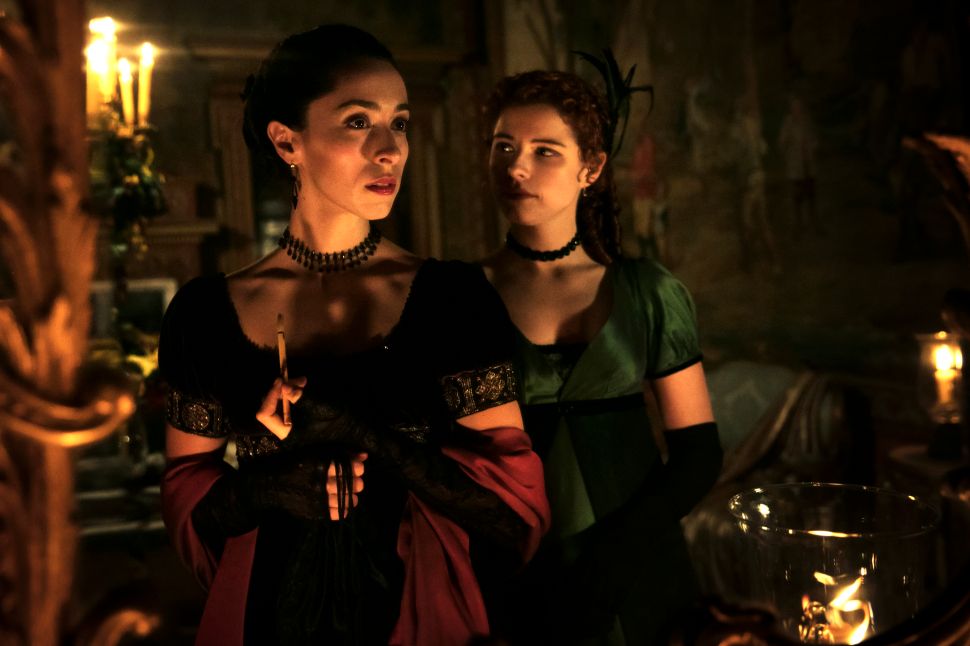