A new year is upon us, the weather is freezing and Liev Schrieber sits mentally preparing himself to vomit into a garbage can, which could all mean only one thing: It’s time for the 74th Annual Golden Globe Awards, aka the Emmys with an open bar, aka American Crime Story: The People v(oted for) OJ Simpson. Here, our resident culture experts weigh in on the TV categories: Will newcomers The Crown, Stranger Things or This Is Us steal Game of Thrones‘ first Best Drama win? Will Ryan Murphy take home all the awards, or just most of them? What’s Tom Hiddleston’s deal?

Nominees:
The Crown
Game of Thrones
Stranger Things
This Is Us
Westworld

Drew: Westworld. I know, I know, it’s wrong. Intellectually, Stranger Things was a superior show. But I really got swept up in the fantasy of those wild west robots (not to be confused with this wild west robot). And I stand by my claim that “piano and orchestral covers of Radiohead” trumps (gross, sorry) an original score. I’m the WORST! So what? I’m owning it!

Dana: Westworld. It was new, buzzy, ambitious and visually interesting. Those should be things that the Golden Globes should be rewarding. Besides, I don’t see another show on this list that featured Ben Barnes as a slimy cowboy.

Vinnie: Atlanta. Donald Glover’s strange, out-of-nowhere classic was that unique brand of special that could floor you with some truly devastating realness, and then a second later run you over with an invisible car. That’s a spoiler, by the way. There was actually an invisible car. What a beautiful, confusing, genius ball of weirdness this show was.

Dana: Veep. At least in some universe, an incredibly qualified, hard-as-nails career female politician should get to win.

Vinnie: The Night Of. I mean, as mandated in the universal contract American Crime Story is actually going to win, and will continue to win until we run out of virgins to feed Ryan Murphy. But screw it, I’m picking The Night Of. The first episode, while genuinely panic-inducing, was one of the most intriguing hours I’ve seen since True Detective season one, episode one (I know, I know). From there, the cast was crazy captivating, from Riz Ahmed’s star turn right down to John Turtorro’s gross eczema feet. This show made me care so much for a man’s gross eczema feet. Give it an award.

Drew: The People v. O.J.: American Crime Story. Seriously, you are high on glue if you pick anything other than Ryan Murphy’s most un-Ryan Murphy-esque production. And everyone who picks The Night Of is lying, since I’m pretty sure nobody watched that show, but then decided to pretend it got good during the finale, just to fuck with me.


Dana: I would say The Night Of, but I’m competitive when it comes to these things, and I’m saying The People v. OJ because I think it’s going to win.

Best Performance By an Actor in a Television Series, Drama

Vinnie: Rami Malek, Mr. Robot. If there was an award’s category for Outstanding Scramble to Eat Adderall Out of Your Own Vomit, well…well, actually, I’d win that, but Rami Malek would come in close second. Dude is an absurdly talented actor, and took Elliot Alderson to some terrifying new heights / lows in Mr. Robot‘s batshit second season.

Drew: You know, I want to say to Rami Malek, but I have a weird gut-hunch (or maybe its just constipation) telling me Billy Bob Thornton is going to win for Goliath in a dark horse upset (because it is also constipated). A lot of middle-aged people like that show!

Dana: Matthew Rhys, for being in the most prescient television series of all time. I would consider Live Schrieber but a) I still have no idea what Ray Donovan is about and also b) I saw Liev in a production of Les Liaisons Dangeroux and he was totally phoning it in/possibly drunk.


Best Performance By an Actor in a Television Series, Musical, or Comedy

Vinnie: Donald Glover, Atlanta. Probably the most impressive thing about Donald Glover’s Earnest Marks is that throughout Atlanta‘s first season you grow to like him, relate to him, and, eventually, root for him, but then in the finale you realize you knew almost nothing about him the entire time. Who knew the natural progression from Childish Gambino’s youthful boisterousness or Troy Barnes’ childlike energy was something this quietly brilliant?

Drew: Donald Glover, Atlanta. Though I feel like he didn’t kill it in the acting category, but he should get it the way Rachel Bloom won her Best Actress Golden Globe last year…as a sort of consolation prize for the lack of “best creating a show and writing it and then also starring in it…you make me tired!” category.

Dana: Donald Glover for Atlanta. Donald Glover is amazing, man. And since I didn’t pick Atlanta up above for best show, I want Childish Gambino to get the trophy here.

Best Performance by an Actor in a Leading Role, Limited Series

Vinnie: Riz Ahmed, The Night Of. In eight episode, Naz Khan went from a timid, scared-shitless bundle of nerves to a hardened, heroine-addicted convict with the word “SIN” tattooed on his knuckles, which, on paper, sounds hilarious. But it’s not, because Riz Ahmed not only made it work, somehow, but turned it into something so believable I expect to see him shooting up under a bridge every morning on my commute to work.

Drew: John Turturro, The Night Of. Again, I only watched one episode of this show and I hated it, but I feel like Turturro could spend an entire show talking about his psoriasis and we’d give him an award. And that’s like, 90 percent of what I understand this show to be about.

Dana: Tom Hiddleston, The Night Manager. I hope he shows up in an “I HEART T.S.” tank top because he promised her when they were still dating and a promise is a promise.

Best Performance by an Actor in a Supporting Role

Vinnie: John Travolta, American Crime Story: The People v. OJ Simpson. Again, Sterling K. Brown is actually going to win, because duh, but I’m just sitting here grinning and clapping my hands at the thought of John Travolta winning an award for his portrayal of Robert Shapiro in 2017. What a sentence to even write. And, if we’re being honest, this show was basically a top-to-bottom masterpiece but in the first episode I stuck around for Travolta’s brand of magnetic banana-balls weird. He was like a living Easter Island head painted orange and fed Red Bull through an IV drip. I loved it, and still do. An award for this man.

Drew: Christian Slater, Mr. Robot. Because a) he deserves it, and b) wait for it…there’s going to be a payoff later.

Dana: John Lithgow should get a special nod in recognition of his achievements in neck-disapearedness. But I hope this one goes to Sterling K. Brown.

Best Performance by an Actress in a TV Series, Drama

Vinnie: Evan Rachel Wood, Westworld. I can’t even properly describe the job Evan Rachel Wood was given in portraying Dolores; she had to act, simultaneously, across like four different timelines, all the while flipping between omnipotent machine and violently confused human. Basically, she had to malfunction on every level. Not easy! Evan Rachel Wood essentially tricked us into rooting hard for a walking sex toy, and I’m not sure I’ve ever seen anything more impressive than that.

Dana: Claire Foy, in The Crown. Foy played the Queen’s restraint and poise with incredible depth. Every eyebrow twitch conveyed an emotion that can’t be fully expressed. Plus, have you heard her accent? Oh my god, her accent.

Best Performance By an Actress in a Television Series, Musical, or Comedy

Vinnie: Rachel Bloom, Crazy Ex-Girlfriend. Listen, I’m not going to take credit for being the first ever critic to be into Crazy Ex-Girlfriend…but I totally was, and my feelings have not changed for a show and star that have only gotten better, funnier, and more brilliant as time goes on.

Dana: Tracee Ellis Ross was the commencement speaker at my graduation, but she should also win this Golden Globe for other reasons too.

Best Performance by an Actress in a Supporting Role

Nominees:
Olivia Colman, The Night Manager
Lena Headey, Game of Thrones
Chrissy Metz, This Is Us
Mandy Moore, This Is Us
Thandie Newton, Westworld

Vinnie: Thandie Newton, Westworld. Ditto everything I said about Evan Rachel Wood, plus the fact that Thandie Newton had to balance being the coolest part of a show that already featured Pablo from LOST shot-gunning saloon-cowboys to a jaunty Rolling Stones cover.

Drew: Thandie Newton in Westworld, though I’d be totally cool with Olivia Coleman winning this, as she is forever Sophie from Peep Show in my head.

Dana: Thandie Newton, Westworld. Playing a Westworld host is a weird acting challenge: you have to be expressive, ALMOST real, but not quite real. And then you’re supposed to grow into being a human. Newton pulled it off beautifully.

Best Performance by an Actress in a Leading Role, Limited Series

Vinnie: Riley Keough, The Girlfriend Experience. Did anyone actually watch this show, a legitimately disturbing gem on Starz about how sex for money isn’t that terrible of an idea as long as you feel no feelings whatsoever? Riley Keough was low-key incredible throughout, in that I am now very scared of her both on screen and off.

Dana: Sarah Paulson already got the Emmy for The People v. OJ, so a Golden Globe is basically slumming it at this point. She has to win it. 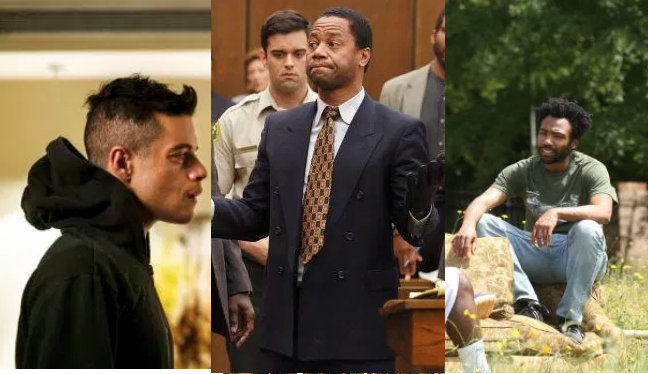