Let’s do a quick recap of the year Gotham City has been having, shall we? At the beginning of the year, a literal busload of freakish monsters were unleashed upon the city, led by notorious walking wig Fish Mooney, who used her newfound telekinesis and army of sideshow beasts to wage war on society. Meanwhile, in a whirlwind of public terror and confusion, a noted murderer and former insane asylum patient was elected Mayor, alongside his Chief of Staff who is great at puzzles but significantly less great at keeping his identical girlfriends alive. Over at the GCPD, the Police Commissioner was driven insane by a mentally ill Lewis Carroll enthusiast, who frequently tried to spike the city’s supply with his sister’s magic poison blood in an attempt to transform Gotham City into a way less sexy but somehow more dirt-filled Burning Man festival.

Yeah, folks, the “numbers” are in and it’s pretty obvious…this was a GREAT year for Gotham City.

At least, that’s what we’re led to believe in Gotham‘s mid-season premiere, appropriated titled “Ghosts,” which was such a slice of prime bonkers Gotham from writer Danny Cannon and director Eagle Egilsson that to spring it on me after so many Gotham-less months was a straight up assault to my senses. Like swapping needles with Alice Tetch, or going hat shopping with Nathaniel Barnes. We’re told–not shown, because how could you possibly justify this?–that Gotham City under Mayor Cobblepot is straight thriving; jobs are up, crime is down, and no one has attempted to firebomb the local nunnery in a record 16 hours. Even better: Thanks to Oswald’s new, Eddie-replacing Chief of Staff, Tarquin Doesn’tGetALastNameSpoilersHeDies, the Mayor is set for an exclusive sit-down with popular TV host Margaret Hearst.

The problem, of course, is that the dead are popping up all over Gotham City, which doesn’t work wonders for morale. For Oswald, this means his dead father, Elijah Van Dahl, is haunting the halls of his mansion in a nightgown, spouting cryptic messages, much like the time I did mushrooms with Netflix’s Pee-wee’s Big Holiday playing in the background. That night, much like this episode, resulted in terror, delusion and an unfortunate death by golf trophy. 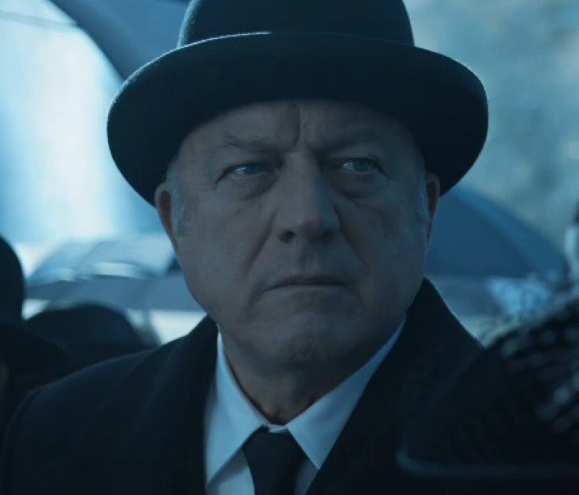 Then, right into the mysterious case of Melanie Blake, a stabbing victim who was found walking the train tracks days after her own murder, burnt to an electric crisp. Jim and Harvey Bullock, crack detectives, follow the leads to the city morgue, and a shady mortician named Dwight Pollard, played by Hollywood’s go-to weasel-faced creepy man David Dastmalchian. Two key things to keep in mind here:

1) In the middle of the investigation, in accordance with “the natural law,” Carmine Falcone puts a hit out on Jim Gordon. This little subplot is hilarious for numerous reasons, which I will now list in a sub-list of this already-in-motion list. 1A) The fact that the hit ends because Leslie Thompkins just straight up changes her mind, that fickle minx. 1B) The fact that the reason Leslie changes her mind is because she visits Nathaniel Barnes in Arkham, and realizes that instead of misunderstood he’s actually legit banana-balls insane, much like Mario would have been eventually. 1C) The fact that Victor Zsaaz threatens Jim by saying, “You won’t see me coming, and you won’t feel a thing,” but then actually just does this:

2) The actual Melanie Blake case leads Jim and Harvey to an underground cult that, surprise, worships the ideology of the late Jerome Velaska, A.K.A Gotham‘s proto-Joker played by Cameron Monaghan. Unless you’ve ignored all preview material, you know that the back-half of season 3 revolves around the resurrection and return of the most maniacal of the Maniax. We only see him here briefly, stuck on ice like a smiling murderous Carvel cake, but apparently Dwight Pollard’s Frankenstein process is working like a charm. I’ve had…issues in the past with Gotham‘s use of Jerome, but I will withhold opinion until the show actually wakes him up. Unless, of course, you stand anywhere in Jersey City between the hours of 12 and 4 AM, where you can hear me drunkenly screaming opinions on Batman and the Joker pretty much every weeknight.

Oswald’s storyline comes very, very literally to a head when, driven to near-madness at his father’s ghostly warnings, the Mayor bludgeons Tarquin to death moments before his big interview. He blows the on-screen appearance — “To hell with the people!” — as evidenced by the one, unnamed family we see get super distraught that the deformed sociopathic mayor doesn’t have their best interests in mind.

And then, a twist! The ghost of Elijah van Dahl is, in reality, the face-shifting Basil Karlo, better known as Clayface.

Edward Nygma has put forth an incredibly insightful plan to drive Oswald insane–dare I say unrealistic? I daren’t–plotting out everything from the ghost, to the interview, to Tarquin’s murder. Barbara Kean, pretty much the only person on this show who just wants to chill in a tub of champagne like a normal person, suggests they put the finishing touches on the plan by exposing Oswald as a murderer. “That’s too easy,” Eddie responds, because Eddie clearly didn’t watch The Night Of, and doesn’t know the American justice system dealing with a murder trial is, like, the most excruciatingly slow process ever. Borrow your cousin’s HBOGO password like the rest of us, Nygma.

Oh, we also get a development on The Court of Owls; the statue Bruce Wayne stole in “Beware the Green-Eyed Monster,” when exposed to light, projects a map onto the wall. Hopefully, for the sake of Sean Pertwee, David Mazouz and Cameron Bicondova, the X at the center marks a more interesting storyline than Catwoman’s drifter mom owing some sweaty guy money.

As always, let’s run down every reference, fact, and nugget of Bat-history brought up in season 3, episode 12, “Ghosts.”

I’m supremely disappointed this didn’t go down the path I wanted: As part of his puzzling warnings, Elijah van Dahl warns Oswald not to trust “the birthday boy.” It just so happens that Geoff Johns, along with artist Gary Frank, once wrote an alt-universe Batman graphic novel, Batman: Earth One, that primarily featured a villain named The Birthday Boy. Real name Ray Salinger, the Birthday Boy is your run-of-the-mill serial killer, except psychotically fixated on birthday parties. That…is not Tarquin’s eventual story, sadly. Really, the only way to understand my disappointment is by comparing the two characters side-by-side. 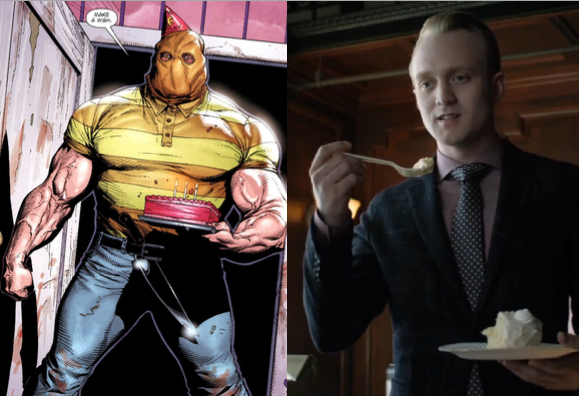 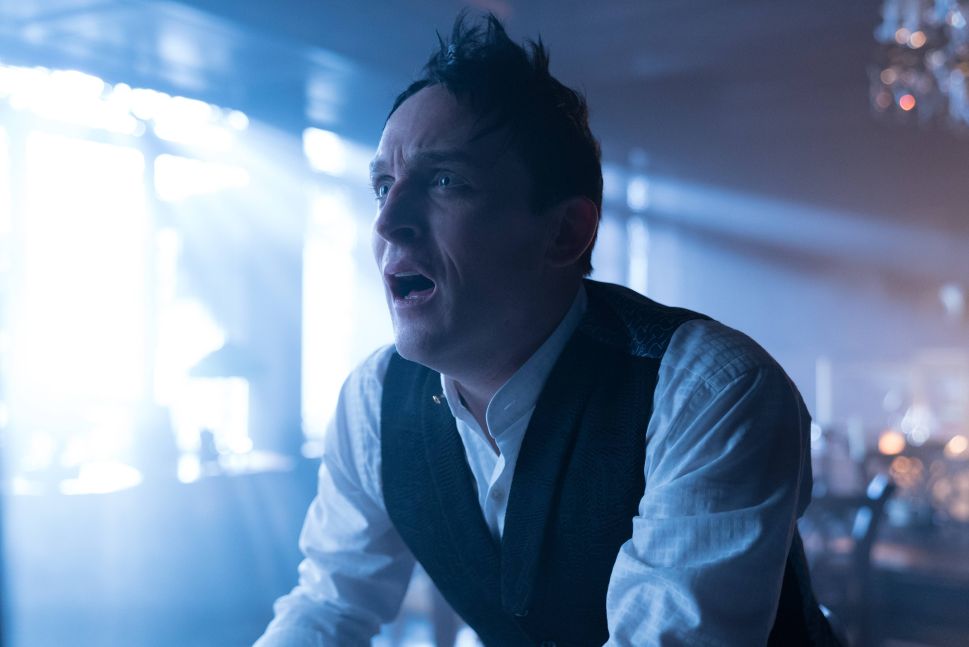