WASHINGTON, D.C.—Former Green Party presidential candidates Jill Stein and Ralph Nader told a Native American political activist at the Progressive Unity Summit yesterday afternoon that the fight to block the Dakota Access Pipeline from running upriver of the Standing Rock Sioux reservation  is “the issue of our time”—and will require collaboration from everyone.

The $3.7 billion, 1,172-mile pipeline would connect the Bakken and Three Forks production areas in North Dakota and Pakota, Illinois, and pass just north of the Standing Rock Sioux Reservation in North Dakota, crossing under the Missouri River—the reservation’s only source of . In response to a question from an American Indian activist in the audience, Nader noted that he visited the Sioux reservation and many of the reservations in 1955—and that Standing Rock activist Winona LaDuke was his running mate in 2000 and had her speak on the radio about the issue a few weeks ago.

He said that the pipeline issue is “something different and greater” even though it has not received the media attention it deserves and remarked that Stein had gotten involved in the demonstrations “before a lot of people were out there.”

“When somebody put the call out for 100 veterans and 2,000 of them were ready and went up there, I just pictured the scene in terms of mass media globally,” Nader said, praising the protesters’ tactics. “You have the state police and troopers and you have Native Americans and you have the veterans all over the country in between. Do you really think [President Donald] Trump is gonna give them the order to attack?”

He said that the activists are breaking new ground that will “spread through the Western Hemisphere” and that “events induce the coalition around reality.” He added that while he is absorbed in other issues sometimes, “we stand ready to help.”

“Oftentimes, you know, coalitions are just a letterhead and everybody wants to band together but they don’t provide any new resources or full-time people ’cause they’re all overwhelmed with their agenda,” Nader continued. “And this one is something that bears close watching and we certainly stand ready to help.”

Stein said that the pipeline issue is “kind of the issue of our time”: a struggle for both human and indigenous rights as well as a struggle to protect the country’s democracy. She also commended the courage of the Native American leaders at Standing Rock.

“All of our lives are on the line at Standing Rock and it is so compelling and everything that we can do to go there, be there, provide material support,” Stein said. “It really is the pivotal issue of this hour right now so I just thank you so much.”

President Barack Obama’s administration denied the pipeline crucial permits to complete construction last year, but executives from Energy Transfer Partners—the company behind the conduit, in which Trump once held a stake—are hopeful the new president will prove more sympathetic.

At the Occupy Inauguration “Inaugurate the Resistance” event hosted by the Progressive Unity Party and the Justice Party last night, Chase IronEyes, a member of the Standing Rock Sioux Tribe, recalled his run for Congress in North Dakota as a Democrat against Republican Congressman Kevin Cramer, who was pursuing a third term in Congress. Cramer ultimately defeated him.

“I was defeated by a Trump surrogate and immediately following my defeat, I joined the resistance at the front lines,” Iron Eyes said. Thats how our organization came to supply about 70 percent of all logistics and humanitarian aid to the camp to this date.”

He told the crowd that none of them are “a passive observer of the crisis that we find ourselves in.”

“You came here to see what’s next, to see how we respond to what appears to be  a very real—some would say already complete—hijacking and takeover of our very democracy by the forces and institutions manifested by the corporate state,” Iron Eyes continued. 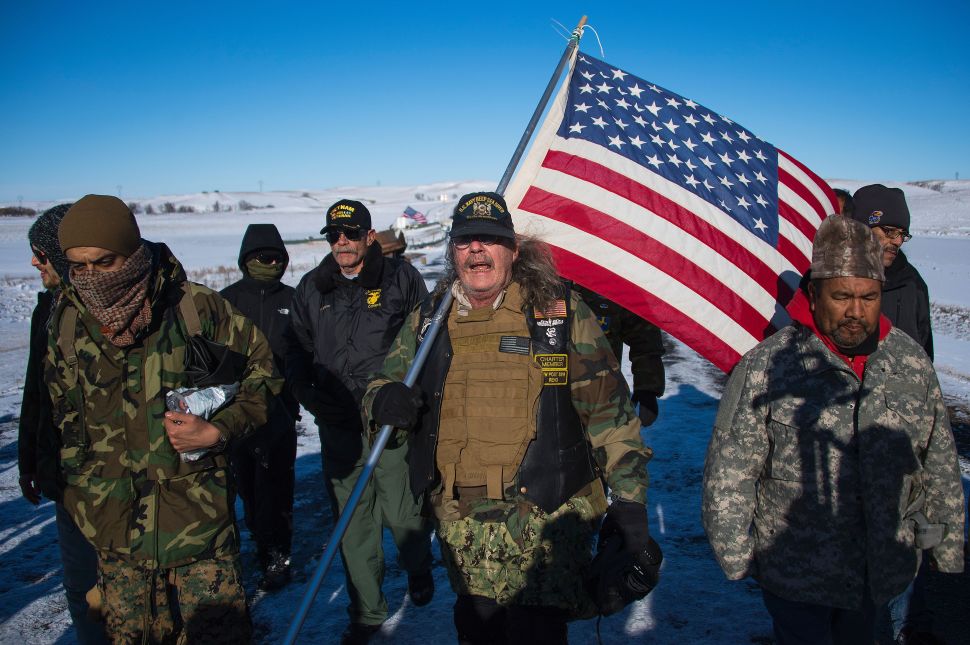