I can’t believe I even need to say this, but I despise the harassment of journalists, especially in these early days of 2017.

Sadly, though, I’m never surprised when it happens. Last week, Eater’s Greg Morabito dissed the prestigious Bocuse d’Or in a piece about the United States winning the highly respected cooking competition in Lyon for the first time, and he’s since received a shit storm of hateful messages.

And if you don’t get why people are so angry, it might be because you haven’t thought that deeply about what the Bocuse d’Or involves. Chefs (yes, mostly white dudes, as Morabito pointed out) train for months, years, in a way that’s as regimented as what Navy SEALs or Olympic athletes endure.

Philip Tessier, a Thomas Keller protégé who was part of the U.S. team to finish second in the 2015 Bocuse d’Or, left his full-time gig at The French Laundry to prepare. As I reported in Las Vegas Weekly about a year ago, before contestants battled at The Venetian for the chance to represent America: “He took French lessons, sweated through CrossFit, went to the gym at 6 a.m. before working in the kitchen for 12 to 18 hours a day. He compares the process to how a gymnast or figure skater would prepare for the Olympics, where exactitude is everything but it often takes a personal, nuanced twist to win the gold.”

Tessier, who coached fellow Keller protégés Mathew Peters and Harrison Turone of Per Se to last week’s victory with the help of Keller and Daniel Boulud, made it clear that being part of a Bocuse d’Or team means being single-mindedly focused on one thing. So of course you are going to be bonded for life with your brothers who are assisting you on your journey.

On the day the United States won last week, my social media feeds were packed with a wide range of chefs (from Daniel Humm to Scott Conant to Vartan Agbaryan to Keller himself) posting triumphant images and congratulating Peters and Turone on their accomplishment. This matters a lot in the close-knit culinary community. So it’s not a shock that prominent American chefs and their business partners, like Alinea’s Nick Kokonas, are going to be pissed off when they’re told that it doesn’t matter. (But you can be upset with grace, like Kokonas was, or you can cross the line, which unfortunately is what others did with their threatening messages.)

The United States has won what many chefs think is the echelon of competition, what is actually billed as “the most prestigious gastronomic competition in the world.” This has to be what Peters and Turone believe is the transcendent, most important accomplishment of their lives.

And then some popular food-media site takes a dump on this, says the food looks unappetizing and that the Bocuse d’Or would be more beloved if it was more like American reality-TV cooking competitions—even though this is a not-made-for-TV cooking competition in France, where Michelin stars matter way more than quick-fire challenges. Having spent a fair amount of time with Michelin-obsessed European journalists, I know that the United States beat a lot of countries that care a lot more about the Bocuse d’Or, including countries that essentially sponsor their contestants.

Of course people are going to lose their everloving minds when you tell them that one of the things that’s most important to them in life is unimportant. The Bocuse d’Or does not need to change, it does not need to become more inclusive or populist or pop-culture. It knows what its lane is, and it stays there. (Like Kokonas tweeted, “It’s a high-level chef/artistry int’l competition. The audience in fact doesn’t matter.”) It’s niche. Let it fucking be niche.

For better and worse, the Bocuse d’Or is exclusive the way three-Michelin-star restaurants are. It’s not for everybody, but it matters a lot to a certain class of people and even more to the hardworking cooks who have spent their careers feeding those people elegant food, and saying it doesn’t matter is, as Kokonas said, mean-spirited. What is the higher purpose here? Fine dining is dying all over America. Loud, boisterous, TV-friendly chefs and restaurants have already won. The Bocuse d’Or gives purpose to a lot of people who might be holding onto something that’s fading away. They should be able to revel in America’s long-awaited victory.

And yet, Morabito doesn’t have to agree. His job involves giving his opinion. I’m sure there are culinary blowhards who believe that if Morabito can’t take the heat, he shouldn’t talk smack about the kitchen. But Morabito doesn’t deserve threats of physical harm, and a Keller-trained chef sending Morabito’s wife a harassing message on Facebook is such creepy horseshit. Morabito is completely right that people are crossing the line, and his wife shouldn’t be involved at all.

The kind of anger Morabito created triggers irrational responses, and many chefs are already hot-tempered and, yes, part of an old boy’s club. (Anybody who’s been in the food world for a while has no doubt encountered chefs that are gregarious and extremely generous toward other chefs while being antisocial around pretty much everyone else.)  It’s sad that such a huge week for the U.S. culinary community had this element of incivility. There are no winners when this kind of thing happens. This isn’t a reality show. Actual reality cuts deeper. 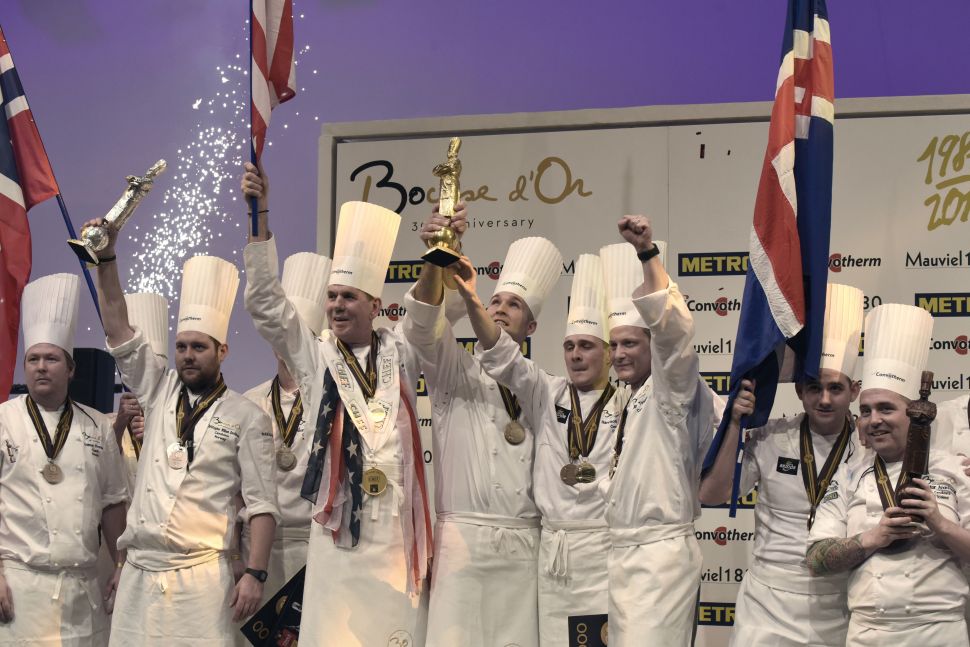