A new Quinnipiac University survey found Hillary Clinton is the only Democratic candidate who could beat Mayor Bill de Blasio in this September’s primary—even though she’s all-but certainly not running.

The poll of 1,138 New Yorkers discovered that the former first lady and presidential candidate would paste the incumbent 61 percent to 30 in an intraparty matchup. But no other potential Democratic rival the survey-takers asked about came within 20 points of touching the mayor among members of their party.

“New Yorkers aren’t in love with Mayor Bill de Blasio, but they seem to like him better than other possible choices —except Hillary Clinton, who probably is an impossible choice,” said Tim Malloy, assistant director of the Quinnipiac University Poll, in the release accompanying the results.

In an even more improbable general election scenario, where de Blasio presumably would hold the Democratic line and Clinton would run as an independent, she would still beat him 49 percent to 29 percent. Ironically, Republicans participants in the study favored the more left-wing de Blasio over Clinton 28 percent to 18 percent.

Neera Tanden, a confidante of the former Secretary of State, told CNN earlier this month that Clinton had no intention to “ever run for any elected office again.” De Blasio backed Clinton belatedly in the Democratic primary, even though he had served in her husband’s Department of Housing and Urban Development and briefly managed her run for Senate in 2000, and both Clintons attended his inauguration in 2014.

Some observers speculated that Clinton or some of her aides were punishing de Blasio for his flirtations with political infidelity by floating the notion she might challenge him.

But one-on-one, de Blasio pounded each hypothetical opponent among Democrats, with Quinn scraping closest with 32 percent of the vote to the mayor’s 55.  Avella, the only one who has declared his candidacy, fared the worse—drawing support from just 15 percent of respondents, compared to de Blasio’s 64, and losing his own home borough.

Quinn and Stringer would fare better in the extremely unlikely event they ran as independents in November, respectively pulling 34 and 32 percent of the vote to de Blasio’s consistent 44.

Nonetheless, de Blasio’s approval rating remains weak, with 48 percent of all respondents saying they view him favorably compared with 44 percent viewing him unfavorable. Malloy suggested that this meant one of his prospective opponents might have a chance.

“None of the possible contenders has made any real noise or spent any money, so this race still could get interesting,” the pollster said.

The mayor’s campaign reacted to the poll with a familiar comment touting his achievements.

“Under Mayor de Blasio, crime just hit another all-time low, jobs are at record highs, the city is building and preserving affordable housing at a record pace, while graduation rates and test scores continue to improve,” said spokesman Dan Levitan. “That is the mayor’s record and that is what this campaign will be about.” 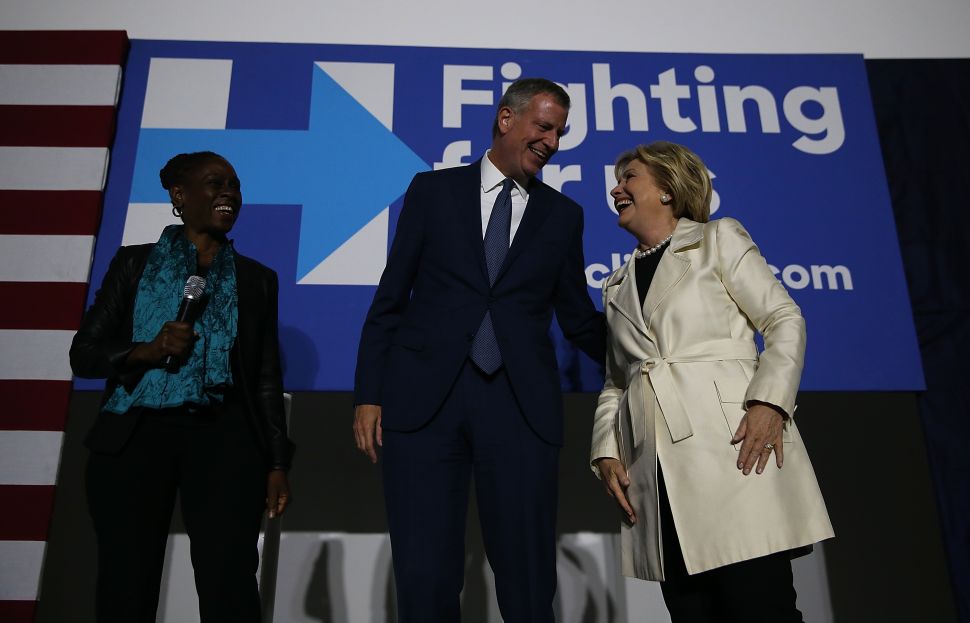