Well I’m not some fancy big city lawyer but I do declare that I know when I have been hoodwinked by a big New York City television program and boy howdy was Homeland back up to its old tricks. If you didn’t read that last sentence in a Kevin-Spacey-Foghorn-Leghorn accent, you need to enjoy your life more. My point is, with the stage reset by last week’s season premiere, Homeland’s plot is twisting like a snake in the grass yet again.

The Man In the Basement opens with what I thought may have been footage of myself in 2009 but what was actually a half dead strung out Quinn writhing in pain on a bed in Carrie’s basement while listening to Alex Jones and demanding beer and canned chili. That was Alex Jones, right? Or rather, that was supposed to be Alex Jones. Either way, it’s a great foreshadow to the possibility of Quinn losing his mind and getting into some fringe politics before maybe being written out of the show, which would explain why Carrie likes him so much. She seems to have a type. When he threw that coffee mug at her through the window I was like “they are going to hook up for sure.” Then, later on, he has a seizure and refuses medical assistance, which results in him back in the basement where they share a moment while watching his Faces of Death clip. I kind of saw this coming, and it was the only thing I predicted correctly in this episode.

The details of Sekou’s little spring break trip to Africa are making him look more and more innocent to me, but after 5 seasons of this show, I don’t really believe anything I learn in the first half of a season. Honestly, if someone looks innocent, I kind of assume they’re guilty, or that some horrible deus ex machina is going to come in laterally and flip the whole situation over. Sekou and Saad are giving me serious Adnan and Jay from Serial vibes. This would make Carrie our Sarah Koenig and it’s all starting to make sense. Okay, maybe now I’m turning into Alex Jones. Sekou’s case does illustrate some very real problems in the criminal justice system, though, what with him pressured into a 7-year plea sentence just for being accused of a crime. I guess he wasn’t doing himself any favors by starting a jihadist myspace vlog in 2017, though. And why won’t he explain why he received five thousand dollars for an expedia.com trip to Africa 2 months after he already paid for it?

There is something about Saad as a character that isn’t sitting right with me. Sometimes when TV writers go to college and fill their heads with books they emerge as fine-tuned research and prose machines, with an ability to create compelling fictional characters set in well-researched settings like the CIA or The White House, but when someone has to write a gang member they end up sketching out a guy in acid washed jeans who runs with a crew called the Steel City Gang. Saad kind of looks like a boss in a Teenage Mutant Ninja Turtles video game in that black and white gang photo. If I punch Saad enough, does he start glowing red and blinking? Anyways when he was confronted by Sekou’s sister and Carrie his acting is a little wooden, but maybe it’s because the character in the show is acting because he’s an informant? That would be convenient. Probably not.

Anyways Dar Adal looks like a cartoon devil as he lies about September 11th to Chief of Staff Rob Hemis while floating some intel about Iranian nuclear espionage that will likely serve this season’s plot nicely. Meanwhile, Saul believes Carrie as she cry-faces about never wanting to don a cloak and dagger again. I also fell for both of these. When you’re watching actors act while playing spies who are then also acting, I suppose you really can’t help but get sucker punched by plot twists because you have nothing to hold on to for a reference to reality. When Carrie sat down with Madame President-Elect Keane (alternate universe Hillary) and revealed that she was indeed working as an informant, I almost dropped my canned soup and Tecate. So season 6 starts out with Carrie having the upper hand on Saul for a change, but nothing that happens at the start of a Homeland season stays that way. 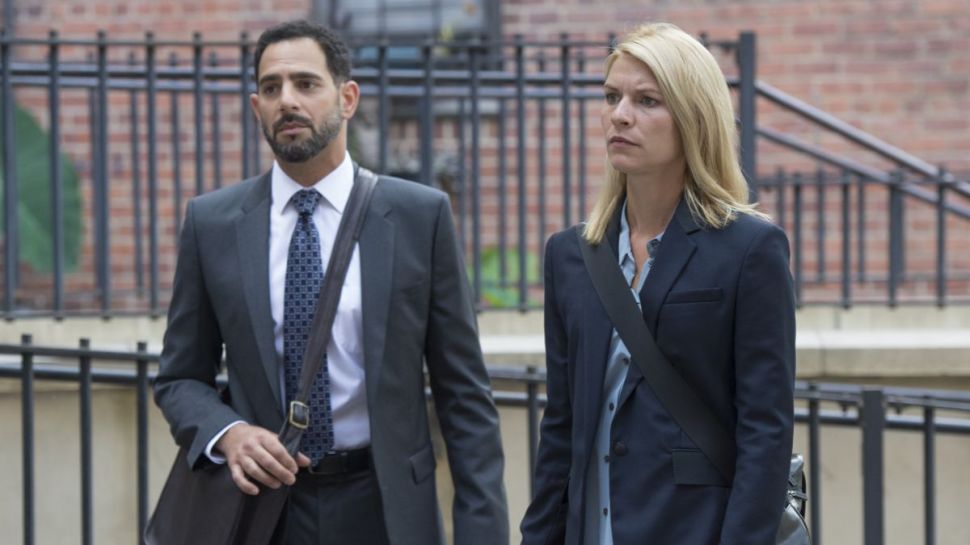