Homeland is back and it’s in Brooklyn now, baby! Carrie Mathison is working as an advocate for muslims in New York, Saul and Dar are trying to convince the new president that the CIA should exist at all, and Peter Quinn is smoking crack. What a time to be a spy.

I feel like Homeland has received a lot of flak over the years for having a perceived political agenda that doesn’t actually exist. It started off as something out of the pages of a Tom Clancy paperback or a boring video game. Some cloak and dagger political thriller where the key players constantly double cross one another and engage in clandestine romantic encounters while concealing knives in their garters. Sure, the story was cast with CIA operatives and Al Qaeda bad men, but all that was merely a backdrop for Homeland’s driving force: plot. Homeland’s true heartbeat is a synchronicity of cliffhangers, plot twists, reveals, and the like. These are the important moving parts of the show, but it’s still a piece of entertainment based on the American government’s involvement in a very real part of the world, so it’s impossible for us as viewers to entirely divorce the theater of it from the reality of what it’s possibly commenting on. I don’t think Homeland ever really meant to preach to us though. I think it just wants to tell us a story about spies lying to each other, and the uncomfortable political implications are merely collateral damage.

Sometimes even in the early part of this decade it seemed like the show was promoting some oversimplified good guy/bad guy ideals from as far back as the Bush era. After the Brody seasons, though, it seemed to distance itself from these values and began to catch up to our current reality and started reflecting some more contemporary issues like drone strikes and whistle blowing. In season 6, Homeland is back in all of it’s awkwardly tense and jazzy glory and is jamming hard on this newfound identity where it mirrors the news a la Law & Order and just spins us a tale.

The problem is television is written in advance, so in this season’s premiere, Homeland actually tried to predict one thing that didn’t happen. I’m just going to go out on a limb here and assume that Madame President Elect Keane is not meant to represent Donald Trump. Hey, I’m not judging you, Homeland, I didn’t think that was going to happen either, but the fact that this whole season is going to play out in an alternate presidential timeline is bananas.

On a lighter note, Peter Quinn’s new Jesse Pinkman act is a barrel of fun. I mean, the reality of it is horrible, but Rupert Friend’s ultra-expressive face lends itself well to playing a junkie. Furthermore, watching a tertiary character like him get sick actually provides way more tension than when something like this happens to Carrie or Saul, because we can safely assume that the both of them will be alive and tricking each other into plays for as long as this show runs. Who knows what’s going to happen to Peter Quinn? He came into the show late in the game and started hand stabbing people left and right. He’s unhinged. He might live or die. Carrie seems concerned about him but I’m not moved by it.

Unfortunately, because the character of Carrie Mathison is a female take on a traditionally male (and totally beaten to death) detective trope, the almost randomly assigned traits regarding her personal life glare awkwardly through the screen. I don’t really buy that she was in love with Peter Quinn, or that she is or isn’t with Otto Düring. What’s going on with her baby? I flat out refuse to believe that someone with that level of stress in their professional life recreationally listens to hot jazz while driving. These qualities aren’t impossible in a character. Homeland just provides no backstory or context to support any of this. It’s fine though because content isn’t the point; plot is the point. It doesn’t really matter why Quinn is getting knocked out by one of his junkie friends, it just matters that it caused me to get up out of my chair and go “yikes!” because I didn’t see it coming. It doesn’t really matter why Carrie is hiding in Brooklyn working as an advocate for Muslim Americans, by now we can trust that this is going to at least go somewhere scary and unexpected.

All of this conflict between plot and content comes to a head, in the newest and most exciting story of season 6: the arrest of a young, black seemingly radical homegrown Muslim after he makes a Tumblr about destroying America or something. I’m so curious whether this guy is supposed to be based on the Boston bombers or just that guy that blew up those dumpsters in Manhattan last year. Either way, he embodies a lot of the strengths and faults of Homeland. He perfectly ties Carrie’s new job back to the world of national security while simultaneously speaking in not-so-subtle exposition about his Muslim beliefs and making us as viewers wonder what the politics are of just watching this all happen on this TV show. Homeland is always confusing, unnerving, and rewarding all that the same time, and season 6 looks no different. 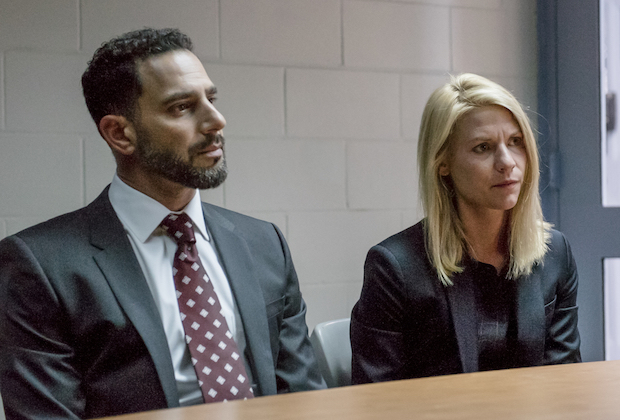