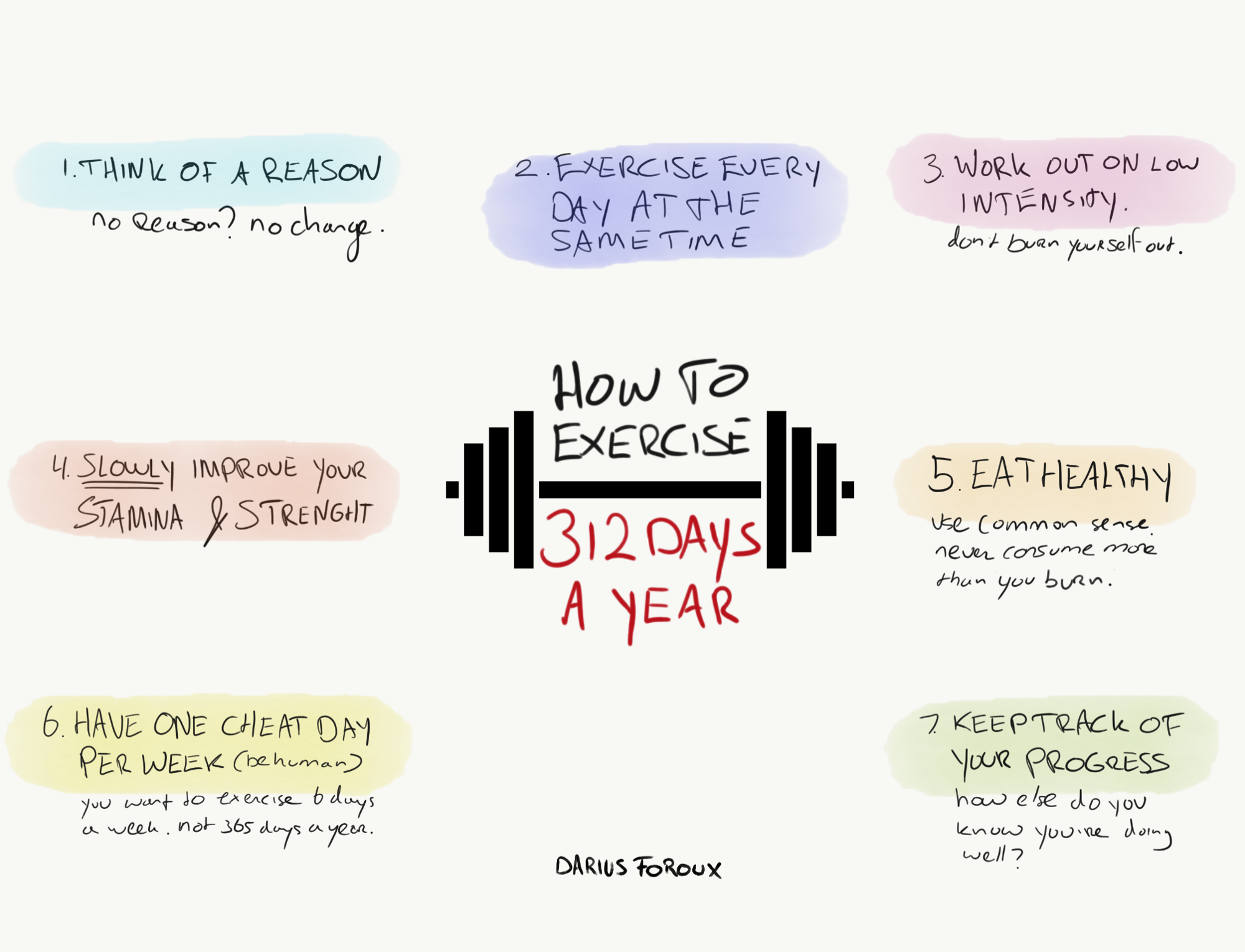 It’s one of the best life improvement strategies you’ll ever find. DariusForoux.com

I used to be a chubby kid. Most people thought that was cute. But it got out of hand when was in my early teens.

The truth is that being overweight sucks. And if you want to change, you need a reason. At that age, I wanted to impress girls. So I dropped the weight. It was surprisingly simple once I put my mind to it. 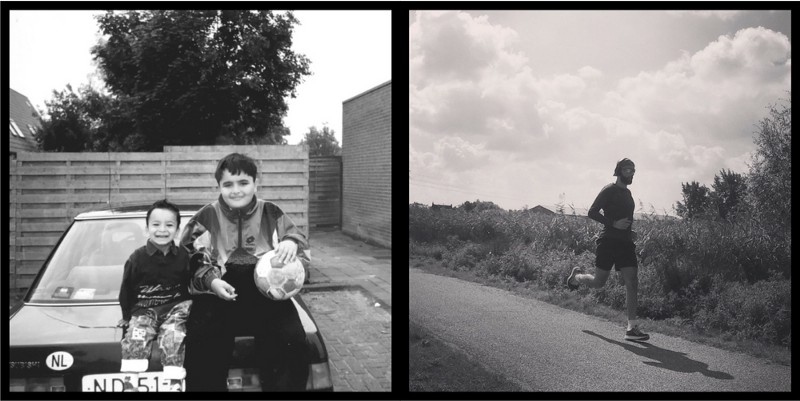 On the left: (chubby) Me and my little brother Daniel chilling on our dad’s busted Mitsubishi with a ripped up football. On the right: Looking like a lean mean running machine on one of my daily runs past summer.

And I stayed in good shape until I finished college in 2010. But after that, I put on weight again. I started working a lot, traveling, drinking, eating unhealthy, and I worked out very irregularly.

And about three years ago I was a tired, unfocused, and lazy 27-year-old idiot with a beer belly. I decided to change. And it took me more than two years to build a solid exercise habit.

Why do you want to exercise every day? How about more energy and focus? Or looking and feeling better? I don’t know why, but people have a health fetish these days.

I get it, boys and girls. Stop showing your incredibly muscular gluteus maximus on Instagram! They should call that app GuyswithoutshirtsandwomeninlegginsGram.

Anyway, we get it. Daily exercise has benefits. We know the why. In this article, I’ll tell you how I formed an (almost) daily exercise routine.

1. Think Of A Reason

O.K., let’s start with the cliché. But this is actually very important. When I was a teenager, I wanted to impress girls. Three years ago, I didn’t have to impress my girlfriend, but I wanted to have more energy so I could be more productive.

No reason? No change.

It can be as simple as, “I don’t want to be that person who is out of breath after three flights of stairs.”

Just make something up and believe in it. If you want to exercise daily and you have no idea why, you’ll think this when it gets tough: “What the fuck am I doing.” That’s the end of your daily exercise habit.

2. Exercise DAILY At The Same Time

This is where I messed up before. Have you ever said, “I’m going to work out three times a week.” And could never find the time? Your brain is constantly thinking.

You’re going every single day. There you go. I’ve solved that problem for you. Now you have more brainpower to work on useful things.

Also, you don’t have to wake up at 4 AM to exercise. I prefer to go around the same time every day. For me, that’s around lunchtime.

Pick a time that’s best for you and stick to it. That’s how it becomes a habit.

3. Work Out On Low Intensity

Look, we’re trying to build a daily exercise habit. We’re not trying to become an Instagram model. We’re trying to work out every day so we improve the quality of our life.

You don’t have to kill yourself every time you hit the gym or go for a run.

That took me a loooong time to realize. You can become fit and look good by working out on low intensity every day. Plus, you have fewer chance to get injured.

I’ve had serious back issues since I was 16. I played a lot of sports and worked out hard for years. But since I’m exercising every day, doing stretches and yoga moves, I’m 98 percent pain free. That other 2 percent is credited to my idiocy, which probably will never go away.

Every now and then I still push myself hard. I’ll put on too-heavy weights on my squats or deadlifts. And then I’ll go spinning or running on the next day. Result? Back pain.

But that doesn’t happen very often anymore because I never exercise at 100%. I’m not a professional athlete/superhuman. I’m a regular human who wants to live a good life.

Also, if you’re thinking, “what’s low intensity?” Get at least 30 minutes of exercise that makes you sweat a little. That’s the amount most experts agree on.

I’ve learned that it’s much more productive to exercise moderately and increase your overall strength and stamina very slowly. Don’t get me wrong: I’m not saying I just go for a 30-minute walk every day and call it quits.

My goal is still to become a little fitter every day. I just look at those things over the span of a decade. Previously, I wanted to become stronger or run farther in six weeks.

Get to know your body. And up the intensity slowly every week. Keep in mind that you’re exercising every day. You’ll still become stronger and fitter — it will just take a little longer.

Understand that you’re doing the same thing tomorrow so don’t burn yourself out.

Every few months people get obsessed with old diets that resurrect. I don’t care about ketogenic, bulletproof, cave man diets. It’s all BS. It’s only about money and being right. I have no problem with that. I understand it’s a business.

I grew up in Holland. The Dutch diet is bread, cheese, milk, potatoes, sausage, and peanut butter (take that, you diet gurus out there). And yet, we’re pretty healthy.

Food is fuel. And you only need X number of calories per day. X depends on gender, age, and activity. Research that shit on Google.

That’s about it. No complex or weird diets needed.

6. Cheat Once A Week

So your goal is to exercise every day. But we all know that’s not going to happen.

This article is not called How To Exercise 365 Days A Year for a reason.

And humans need to let loose every now and then. We’re not robots. Sometimes we need to watch crap on Netflix all day. And we also need to chug a jar of ice cream at times. Or eat two Big Macs in a row.

Why? Because it feels good. Just don’t make it a habit. Otherwise, you’re back to square one.

But keep the goal of exercising daily in your mind. Because if you plan to exercise 6 times a week, you probably go 5 times.

I have a spreadsheet. And every Monday I update it with my previous week’s exercise count. Last year I exercised 321 times. It was my main focus for 2016.

You don’t have to do the same. Just find a way to keep track of how well you’re doing. Getting a visual representation of how much you’ve exercised is very motivating and keeps up the momentum.

Look, I don’t take life that seriously. But I’m dead serious about my health. If it’s your goal to exercise every day, you can do it. On average, people exercise 3 days a week. That’s 156 days a year.

Even if you skip one day a week, you exercise 312 days a year: That’s double the average.

With this, I challenge you to join me in working out daily. It’s one of the best life improvement strategies you’ll ever find.

If you’re in, commit to it by commenting below. Because once you say it, you’re half way there.

Now you just have to DO it.

Shit, did I just really quote Nike? That reminds me, I haven’t run today yet.

Darius Foroux is the author of Win Your Inner Battles and founder of Procrastinate Zero. He writes at DariusForoux.com, where he uses tested methods and frameworks to share ideas for overcoming procrastination, improving productivity, and achieving more. Join his free newsletter.

This article was originally published on dariusforoux.com. 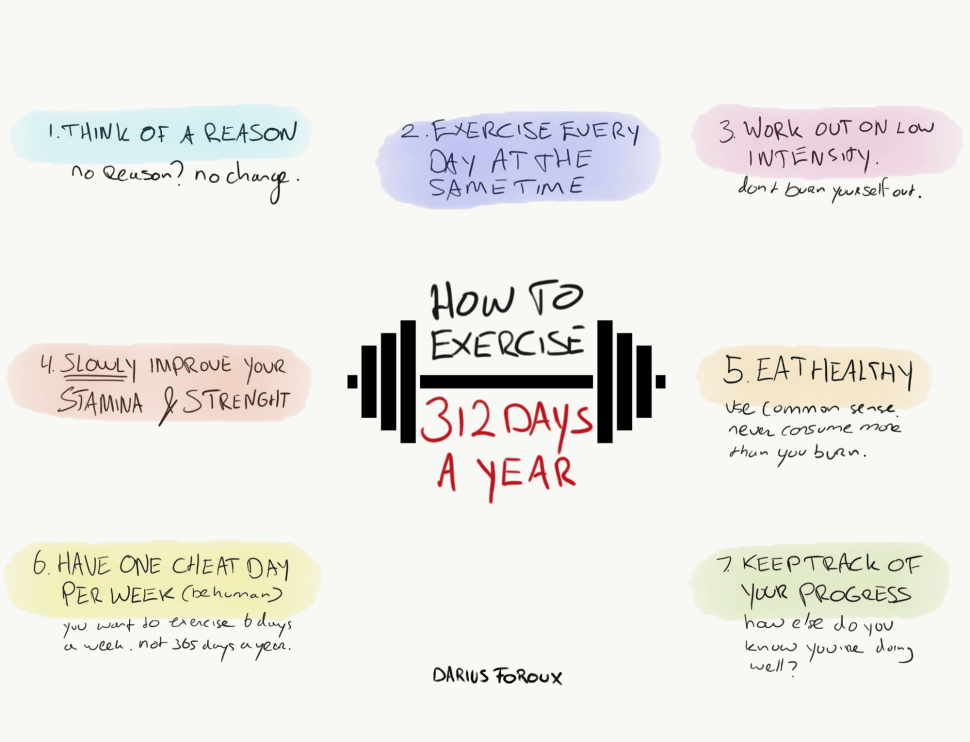