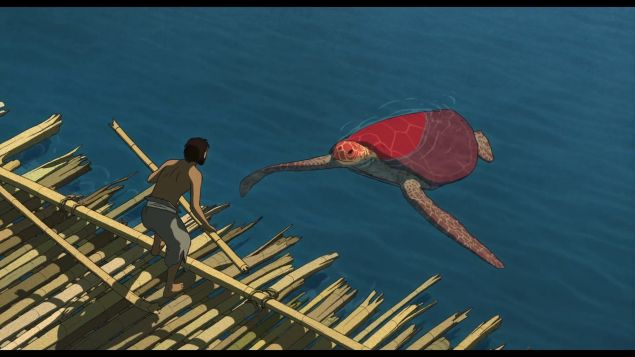 A still from The Red Turtle. Sony Pictures Classic

We have become so accustomed to hyperactive computer animation – anthropomorphized squirrels on speed. In contrast, The Red Turtle appears demure, otherworldly and mystical. So, this is what animation could be, a radical flight of the imagination, not an extended advert for Happy Meal toys. It’s like a Buddhist retreat in comparison to the fire-and-brimstone fundamentalist tent shows of typical contemporary cartoon fare. While it’s unlikely to win an Oscar, Dutch animator and screenwriter Michael Dudok de Wit’s collaboration with Studio Ghibli will likely be nominated for Best Animated Feature next Thursday for its gorgeous aesthetic and pristine storytelling.

The 80-minute fable begins with rapturous 2-D images of waves recalling Japanese woodblock prints. The way the dark swells form and rise and combat each other is hypnotic, visually pleasing even as there’s an air of threat, of nature too big for wee man to control. A lone human figure appears, swimming up one mountainous rise and down the next, desperate. He clutches a piece of wood. He slips off.

It wouldn’t be much of a story if the man disappeared there. And, so, this storm-tossed, dark-haired castaway awakens on a pristine shore to the bite of a curious crab that climbs up the inside of his pants leg. That’s about as much of a welcoming committee as he’s going to get on what the stranger soon discovers is a rock in the middle of the ocean bearded with a bamboo rainforest.

It’s here that some reviewers, clutching for comparisons, view this story as Tom Hanks’ Castaway without Wilson, the soccer-ball companion nominated by cynics like me for Best Supporting Actor. That star-driven Hollywood shipwreck struggles and struggles to make its points about the way an extreme circumstance hones the individual down to his most elemental self. Not The Red Turtle. It gently breathes life into the simple button-eyed hero without dialog. He grunts, he groans, he sighs as he climbs to the island’s highest point, examines his vast loneliness, and enters the forest to harvest poles to create the raft he intends to carry him back to civilization.

Each time the man leaves the shore for the sea, he fails. Some unseen creature (a shark? a whale?) bumps the raft from below. The vessel cracks open. He sputters, swims back, disillusioned. Finally, he sees the creature: the titular turtle, a giant reptile of glorious red. The animal corrals the human and then follows him to the shore. Enraged, the man uses all his might to flip the turtle on its back and then regrets the cruelty of his actions.

It’s at this point, that the film slips elegantly into fantasy, as the dying turtle transforms overnight into a mysterious red-haired woman, modestly covered by the large shell. The story enters the fairy-tale world (common in Japanese and European literature) of a human groom taking an animal bride, in this case, the turtle assuming, at least for a while, human shape. The man comes to embrace the animal world, becoming one with Nature, his life entwining with that of the turtle-woman. She gets rid of the unnecessary shell. He abandons his raft. They have a child with a kinship to the sea turtles that come to the shore but a human shape.

The story evolves into the circle of life (no razzmatazz rousing The Lion King anthem here). The pair grows more accustomed to each other, raising their child. As the youth ages, so do the parents, their hair whitening. Danger remains – in tsunamis, in the struggle for food and to avoid being a meal for larger beings. However, the couple’s devotion continues, an example of man and nature living in wordless harmony.

Whether American children, now accustomed to those hyperactive anthropomorphizing cartoons, will take to the quieter floating beauty of this film is debatable. It lacks the often outrageous characters and situations that populate the works of Studio Ghibli’s genius Hayao Miyazaki (Spirited Away, My Neighbor Totoro). And therein rests this feature’s unique artistry: The Red Turtle succeeds as both a sumptuous story of humanity’s potential for unity with nature and an example of the unique human capacity for understanding through art.

The Red Turtle is now playing in select theaters. 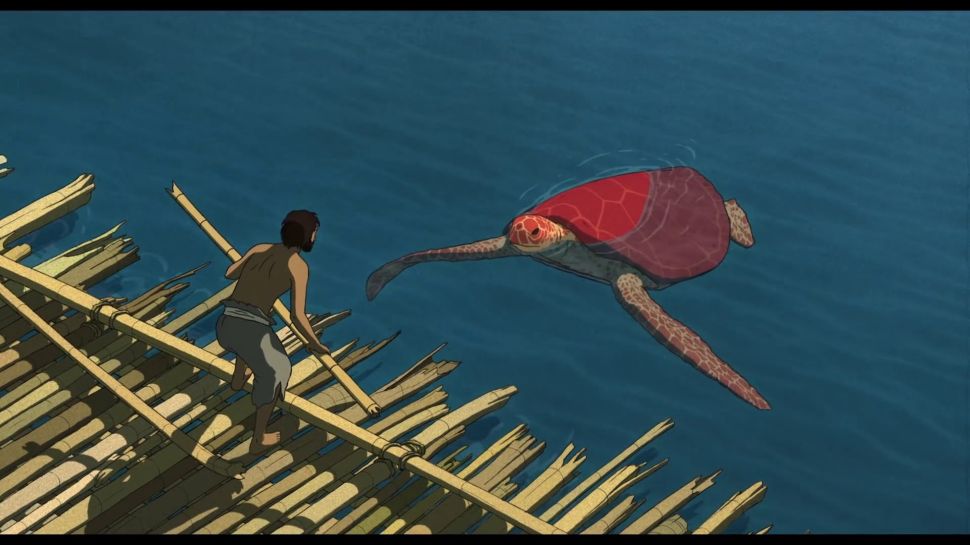