An air force is not something we tend to associate with terrorist groups, but innovations being tested by ISIS against forces encroaching on Islamic State strongholds could foretell flying IEDs at the global terror level.

These aren’t high-tech warfare, but popular hobby drones that can be purchased anywhere and operated without arousing suspicion. And that’s a huge concern.

ISIS has released videos in which they’ve used drone photography to capture sweeping vistas of their attack convoys and training areas. They’ve used drones to conduct surveillance and assessments. And it’s not limited to the Islamic State. In Afghanistan, the Taliban recently revealed their own unmanned capability in a drone-filmed video of a suicide bombing.

Last week, ISIS released their first video of weaponized drones in action, showing a drone’s-eye view of explosives dropping on groups of people and vehicles targeted in Mosul. The blasts were similar to a grenade, causing injuries when close enough to people—two Al-Hurra journalists were wounded this month from a drone-dropped explosive—but not causing much of a dent to armored vehicles.

Lt. Gen. Stephen Townsend, commander of U.S. forces in Iraq and Syria, warned last fall that ISIS “makes extensive use of drones” and “it’s not episodic or sporadic—it’s relatively constant and creative.”

It’s something at which they’ve continued to get more and more creative. Not only do they drop explosives and fly back to base, but Townsend described drone attacks similar to a Trojan horse: the mysterious little craft lands, troops think it’s a disabled enemy drone and bring it in for analysis, and then it explodes. In October, an ISIS drone flown into the midst of coalition forces in Irbil killed two Peshmerga soldiers and injured two French Special Forces soldiers. The drone was said to be cheap; its cargo was reportedly C4 explosive.

The unpredictability of the method would meet jihadists’ goal of stoking terror—especially as the number of hobby drones grows by leaps and bounds.

“We expect to see more of this,” the general predicted, calling it a “pretty thorny problem.”

Col. John Dorrian, spokesman for Operation Inherent Resolve, the same month called ISIS’ drones “commercial, off-the-shelf” craft, “a variety of drones and improvised drones and modified drones” such as quadcopters. “There’s nothing very high-tech about them. They can just buy those as anybody else would. Some of those are available on Amazon.” Recently-discovered checklists show ISIS tracking the progress of each drone mission, as any group would assess an advancing program.

The military has responded to the frontline threat by exploring technology such as the DroneDefender, a gun that disrupts remote control and GPS signals at a range of up to 400 meters and disables the drone before it reaches the danger zone. Testing and acquisition of this technology shouldn’t stop at the military or federal government level but be expanded to state and local law enforcement agencies. What happens, after all, when terrorists’ drone use is expanded to attacks at home?

It’s no secret that, as ISIS’ battlefield drone technology evolves, terror groups are constantly looking for ways to mix up attacks and shake off suspicion. A guide for western jihadists issued in 2015 by ISIS urged the purchase of Nerf guns and playing Call of Duty for practice, and trying weapons such as crossbows that won’t arouse the same suspicion as guns. In a global jihad landscape where lone jihadists are encouraged to be innovative, try widely circulated home-cooked explosive recipes with easily accessible ingredients and even find jihad-friendly tools at the toy store or moving truck rental, what’s to stop them from placing that Amazon order and taking to the skies?

It’s also well established that terror groups are embracing the “death by a thousand cuts” strategy instead of insisting on 9/11-style attacks massive in scope and scale. While an explosive device dropped from the sky may not inflict mass casualties, it can certainly kill and maim just like a bomb left on a city street.

The unpredictability of the method would meet jihadists’ goal of stoking terror—especially as the number of hobby drones grows by leaps and bounds.

At the Consumer Electronics Show in Las Vegas this month, Federal Aviation Administration chief Michael Huerta said “there could be as many as 7 million drones sold in the United States by 2020—that’s about 2.5 times the population of the state of Nevada.” Over the past year, he said, more than 670,000 drone users registered their crafts with the FAA.

So there will be a lot of unmanned gadgets in the sky. We have terror groups who want to intensify attacks in the West. We have ISIS and the Taliban testing in the field. We know terror groups see drone use as an evolutionary field. Since a drone IED could be detonated or drop a dangerous payload in a zone that’s perfectly safe per regulators for recreational drone use, how would they be intercepted?

ISIS drones may not be much of a game-changer in a fierce battle to retake a city, but they could definitely change the homegrown terror landscape. We have to consider how this type of attack may be applied by any lone jihadist or cell, anywhere. 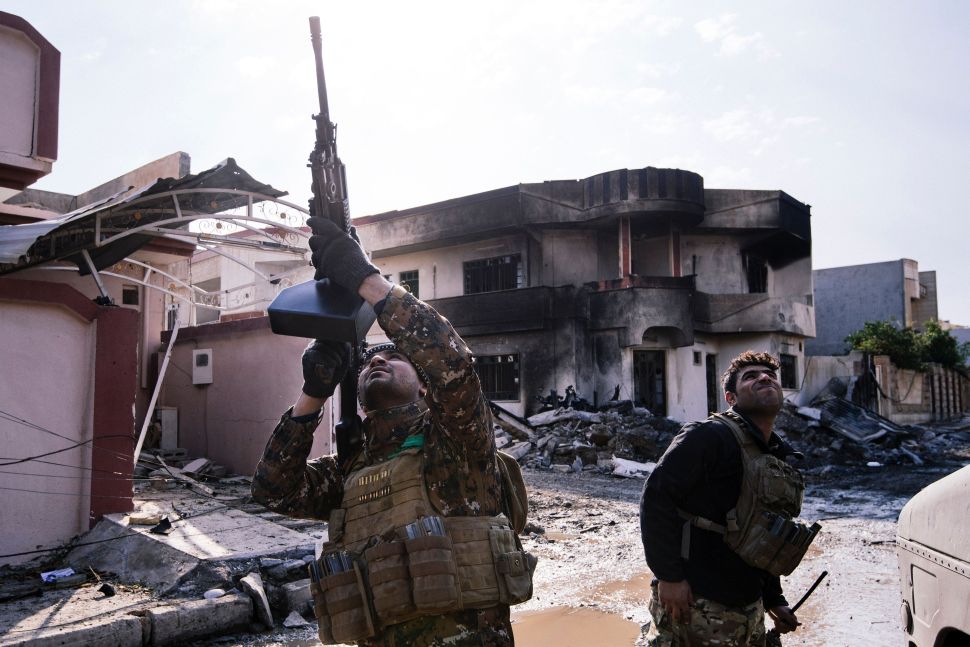