Conspiracy theories run rampant throughout the Middle East. Almost every conspiracy theory, which stoke unreasonable fears, has believers attributing superhuman traits to groups of people and individuals. Not surprisingly, the end result is an altered state of reality.

It is that heightened sense of fear that paralyzed locals throughout the Middle East and catapulted terrorist groups, most notably ISIS and al Qaeda, into power. Huge swaths of the region into were brought to submission. It is a process of vicious fear and hyperbole—then submission.

Conspiracies have spread about superhuman warriors, the equivalent of Iraqi-type Rambo characters fighting ISIS and Syrian Supermen-thugs battling their respective enemies. There are claims these mega-men have killed dozens and even hundreds of ISIS fighters and digitally enhanced photos make the hero warriors resemble the Hulk.

For decades this warped perspective has portrayed Israel in unrealistic ways and the continued misperception thwarts those who hope to achieve normal interaction—let alone peace—between Israel and her neighbors. The seeds of hatred are deep and the conspiracy theories will not abate unless leaders, educators and clergy dispel them.

The fabulists portray Israel as a mass murderer and a torturer of Arabs. Israel is viewed as not merely a land grabber, but as a desecrator of Arab and Muslim lands and holy sites and an oppressor of the innocent. Given that, some in the region deem terrorist acts against Israel as merely self defense.

Israelis are also mythologized as crack fighters, masters in sci-fi technology and creators of weapons with super power abilities and a rather altered reality emerges. Israel’s new weapons include stealth tanks, guns that shoot around corners, and a bullet with a camera that delivers video to the commander’s iPhone. Stuxnet and other computer viruses as well as spyware and satellite technology allow Israel access all over the world. Last year, Lebanon discovered a series of rocks and stones with audio and video capabilities, transmitting movement and activity.

According to the hucksters, Israel’s weapon arsenal can go anywhere, and can see and hear everything. Preposterous as this sounds, these theories have taken hold in the Muslim and Arab world, leading to the torture and execution of wild birds deemed Israeli spies.

Truth is: Israel is a bird-watching super power.

Ornithologists from all over the world come to Israel, especially southern Israel, to study migration. The birds make their way straight up the Syrian African Rift to the Beit Shan Valley then on to the Hula Valley and the Galilee.

It’s got nothing to do with politics, diplomacy or security issues. It’s all about geography. Israel is situated on the migration route of half a billion birds—over 530 species—traveling in splendor and meticulous formation from Africa to Europe and then back. Many flocks touch down in southern Israel today, just as their ancestors did in Biblical times. They follow the same migration path, they fly in the same formation. It is truly breathtaking.

But conspiracy devotees are not easily turned into ornithologists.

Not too long ago, in 2014 in Iran, a bird with an Israeli tag was “arrested” for espionage. The bird was thought to be a spy carrying cameras and microchips and perhaps even explosives. After an investigation which included an x-ray, this bird, like others, was set free. Incidents like this have happened in Saudi Arabia, in Iraq, Syria in Egypt and in many more countries.

Another bird, with metal ring tag on its leg reading 24311 Tel Avivunia Israel, was spotted in Turkey. This would of course frighten any reasonable person, who would then, frantically, call the police and the secret security service. This bird was found and captured, making news in the national Turkish newspaper Hurriyet, usually a reliable source. In this case, at least, the publication maintained a sense of humor and concluded their piece with this kicker: “Following the tests, the authorities decided not to press official charges and the falsely accused bird was free to fly away.”

Not just birds. Several years ago Egyptians saw an increase in shark attacks and blamed it on Israel. They asserted that Israeli-trained sharks were targeting Egyptians.

In contrast, a very rare Iranian White Throated Robin recently touched down in Israel. The bird, indigenous to Iran, does migrate—but rarely to Israel. It was spotted and photographed in a children’s park in Israel’s southern most city, Eliat, hopping, playing and enjoying himself. A photographer quickly shot a photo—not a weapon—and sent it to the local bird-watching center.

Conspiracy theories about Israel, crazy as many of them sound, are as much a part of large swaths of Muslim and Arab culture as are hummus and pita. To move forward these theories, which are for the birds, need to be debunked. 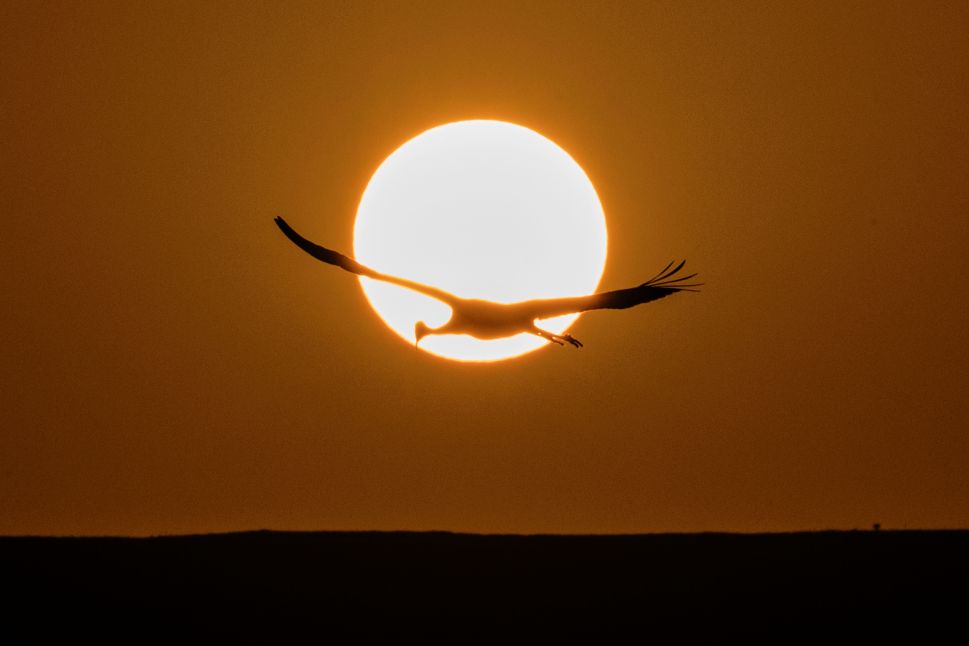