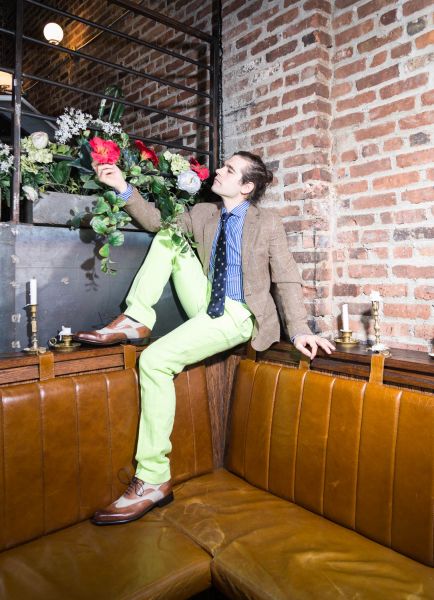 Jason Ralph, who stars as Quentin Coldwater in The Magicians. Photo: Kaitlyn Flannagan for Observer; Grooming by Shay Garcia; Shot on location at Sadelle

The first thing I noticed about Jason Ralph, who plays Quentin Coldwater on the SyFy adaptation of Lev Grossman’s Magicians trilogy is that he looked nothing like I imagined him from the books. Which is a gross thing to say, I know. When we meet Quentin in The Magicians, he is a neurotic 17-year-old, and I always imagined him short and skinny; a Simon Rich-type (with oversize glasses, it goes without saying). Ralph is 30 years old, and while slender, his defined cheekbones and impish grin are more reminiscent of Peter Pan than Woody Allen.

Despite some early hesitation, I was a huge fan of The Magicians’ first season, which condensed multiple timelines of characters over the course of three books and streamlined it to a practically unheard of concept in these days of Peak TV: chronological order.

But that was only part of the equation. While the fanbase for The Magicians might not be that of Harry Potter’s (though it’s often compared to Rowling’s series, since they both take place in a school for magic), any adaptation of a beloved series will always face intense scrutiny from devoted bibliophiles. And showrunners John McNamara and Sera Gamble did nothing to assuage super-fan fears during the premiere: characters had their names (and in some cases, ethnicities) changed, the prologue involved getting into Magic GRAD school instead of Magic College, and there was a whole episode that features a character breaking out of a mind prison by getting everyone to sing “Shake It Off” by Taylor Swift.

“I became very protective of it very quickly,” said Ralph, when I mentioned the integrity of Grossman’s novels. “Usually when you’re auditioning for something, you are taking whatever is coming at you and saying ‘yes’ because you have to to survive. I started reading the books and became a quick and rabid fan. I had an opportunity and need to reach out to the creators and ask ‘What kind of show are you making? Because I love this thing now.’”

Ralph isn’t the only one to feel territorial about the adapted books. The trilogy’s author, Lev Grossman, told Dana Schwartz he also had his fair share of misgivings and doubts about turning the books into prime-time television. Luckily for all of us, these fears turned out to be unfounded, and the show became an instant cult classic.

In the books, Coldwater is an uber-nerd with the perfect GPA and an application due for Yale. In his spare time, he does card tricks up in his room, or reads and rereads his copies of the Narnia-esque series Fillory and Further. Even before his world gets turned upside-down with the revelation that magic is real (and really hard to do), Quentin would be a beta-male type. Or at least beta-male adjacent.He’s sullen and supercilious, pining after his best friend’s girlfriend. Throughout the series, Coldwater is the type who seems to prefer the friend zone to that of any actual intimacy. Though he may protest otherwise, we are given a glimpse of his mindset in the first book:

“His crush went from exciting to depressing as if he’d gone from the first blush of infatuation to the terminal nostalgia of a former lover without even the temporary relief of an actual relationship in between.”

Ralph-as-Quentin, however, is a far cry from the “irritable, unhappy, unpleasant” character in the books. The actor–who looks so much like a young Robert Sean Leonard that you almost expect him to climb on top of a chair and read “Oh Captain, my captain”–showed up to our interview at Sadelle’s with his hair pulled back in man-bun, wearing lime green pants and a brown corduroy jacket.

“This is what a Hogwarts Professor thinks Muggles wear,” Ralph giggled while pretending to vamp for the camera. Ralph plays Coldwater as less petulant and more of a lost puppy: when we are first introduced to him, he’s gazing out of a bleak window in a psychiatric facility (a real one, this time) where he’s had himself committed. He’s deeply depressed; dreamy, yes, but an elitist? Hardly. Quentin from the books would probably have a LOT to say to someone who accused him of privilege; the Quentin we are introduced to in The Magicians’ pilot would probably rather slit his own skinny wrists than argue on his own behalf. Unable to uh, perform during his Brakebills audition, Dean Fogg hones in Quentin’s weaknesses and begins to belittle him, rising to a crescendo with the scream “DO SOME GODDAMN MAGIC!”

This, literally, does the trick.

Quentin is accepted in Brakebills, though his crush, Julia, is not. It is not soon after that Quentin begins to distance himself from his non-magical friends. “Which is a problem that Quentin has, he can’t imagine other people have as complex lives as he does,” Ralph said. “Everyone is 2D in his world, for too long. The journey of the story is him discovering people are as complex as he feels he is.”

Season two, which premieres tonight, opens on a devastating note: having traveled to Fillory (oh yeah, that place is totally real, as it turns out) with his friends to beat a moth-faced man known only as The Beast, the magicians have failed utterly in their showdown. Julia, the only character with an object powerful enough to kill the Beast instead absconds with him back to Earth, to help her track down the demon god that raped her and murdered “hedge witch” coven. (Hedge witch is a derogatory term for anyone who practices magic outside an accredited Magic School. It is also the name of my new post-normcore band.) 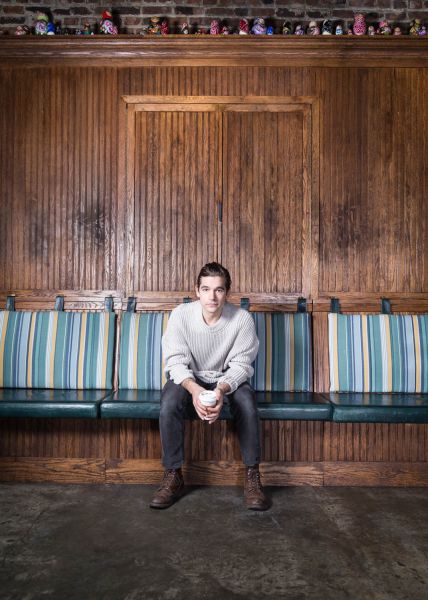 Jason Ralph, 30, originally from Texas, where he joined school theater to overcome his shyness. hot on 9 January 2017. Photo: Kaitlyn Flannagan for Observer; Grooming by Shay Garcia; Shot on location at Sadelle's.

As the Beast had just laid waste to all of Quentin’s friends, you’d think Julia was being set up as the villain of the series. But The Magicians’ first season  was very clever in having Quentin and Julia’s timelines run parallel every episode (instead of having to wait for the second book to tell you what happened with that girl our hero used to like and then totally forgot about.) We have context now; we see how condescending and dismissive Quentin becomes toward Julia when she is not accepted at Brakebill. When she begs him to ask the Dean if she could take the test over again, his guilt and insecurity turn him cruel and dismissive about Julia’s own abilities.

“You have to be able to do…certain things…” Quentin starts, apologetically, before Julia shows him that she can, in fact, make slight sparks fly out of her hands. Proof positive for her: “It’s real, and I am a magician.”

“Not necessarily,” Quentin quietly corrects her.  “There’s a bunch of nothing spells out there, people who don’t know what they are doing. There’s a video of George Bush they keep taking down: he’s drunk, and he’s laughing and making magic air ripples.”

“It doesn’t mean you have potential,” Quentin says, terrible. You can see how in his mind, Quentin still believes himself to be the good guy, trying to help a friend. Just like it’s equally clear to Julia and the audience that Quentin has developed (or is only just now revealing) another side of himself. New Quentin is a lot closer to the character in the books: a petty, smug, meritocratic elitist.

Quentin urges her to have her memory wiped. “All you know is that you don’t want to fail.”

“It’s not about that,” Julia pleads.

“Are you sure? Because you can do everything else,” Quentin condescends. “It’s okay if this isn’t your thing.”

“That was hard to play,” Ralph admits. “It’s not how you experience it in the book, them being in two completely different timelines. It doesn’t feel as vicious and self-serving (in the books) as the way we played it. It was hard to go there as him because the novels hadn’t prepped me for that side of him.”

Not that Ralph thought Quentin was a particularly sufferable character in Grossman’s novels. “It’s a different experience reading it than actually playing it. Playing it is heartbreaking and gross and a struggle. We want to make it feel real.” 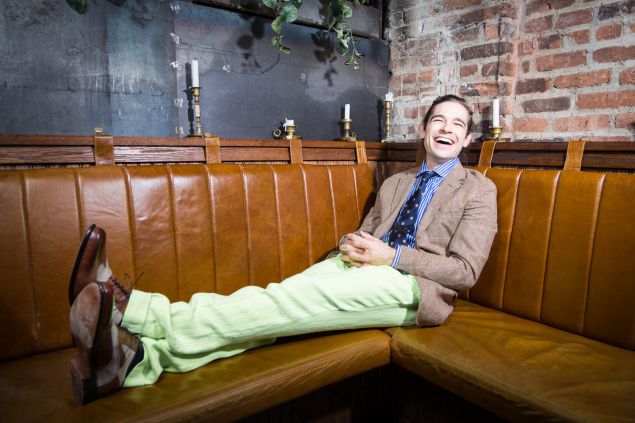 When not working on the show, Jason Ralph spends his time in New York, where he’s the co-artistic director of a theater company, Strangemen + Co. Photo: Kaitlyn Flannagan for Observer; Grooming by Shay Garcia; Shot on location at Sadelle's.

Ralph himself is way more upbeat than his character: our first conversation is him explaining the plot of Peter and the Starcatcher to me, in great detail. (He understudied and performed in the show’s 2012 Broadway run, and came back as the play’s hero, “Boy” in the off-Broadway production.) Born in Texas, Ralph describes his unlikely trajectory to TV leading man. “I didn’t watch TV or movies as a kid. I was super shy as a kid and theater was a way that everything made sense to me. I knew how to communicate to people through storytelling. I understood story structure, and I was really interested in directing things when I was little. Theater was the only thing I wanted to do, and then TV and film came along with it, as it must to survive in the city.”

When Ralph isn’t with his partner, Rachel Brosnahan (House of Cards), he spends his time as the co-artistic director of Strangemen + Co., a New York theater company he helped found. “My goal for this theater company is to run it like a business and to not have to rely on outside funding and grants. I think in this country we have a problem where we view the arts as charity, and therefore it has no value. Things in America that have value are profitable, and unless you are profitable, we don’t know where to put you. Places like Europe aren’t that way. To invest in the arts there is not to throw away money, but to invest in themselves. There is no shame in that.”

Stageman + Co. has already achieved a level of immortality rare for a fledgling theater: their production of The Woodsman was broadcast on PBS last year. And even though the stage is his passion, Ralph sees a future where artists can traverse as easily from the stage to screen to TV as Quentin Coldwater turning into a goose. Which is to say: not that difficult at all. 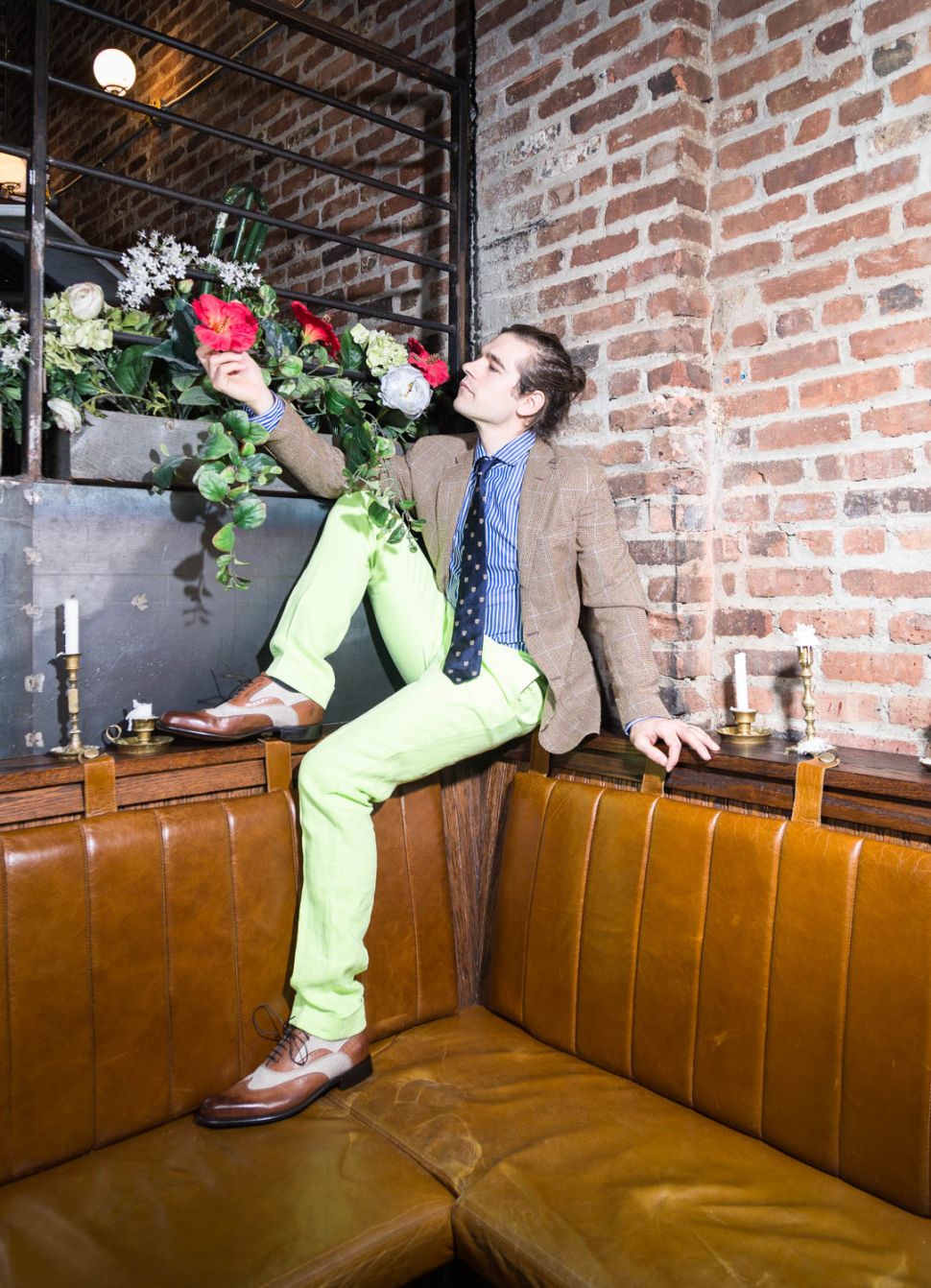