Pie in the Sky, a collage by the poet John Ashbery, is what it says it is. A broken plate with a slice of pie on it covers a winter mountain-scape that seems lifted from an adventure book from a century ago.

But there’s more. If you look at the lake where skaters are in that landscape, the pie in (or from) the sky seems to be crushing them, as if it were an invading spacecraft, all watched by a puppy from a children’s book. Add the raven gliding above, and you have the makings of a nightmare—or do you?

Pie in the Sky is one of 16 collages in one small room at the Tibor de Nagy Gallery in “John Ashbery, Recent Collages,” which opened quietly in mid-December and runs through January. Tibor de Nagy is located across Fifth Avenue from Trump Tower. The traffic outside has meant that traffic into the gallery has been light.

Ashbery, the distinguished poet and art critic, is 89. He’s been making collages since he was at Harvard in the 1940’s, and he’s been drawn to the elements of these creations since he was a child.

Ashbery clips his materials from almost any source, which is the whole point. You see postcards and Pop Art, and also references to Picasso, and to Max Ernst, who was a special inspiration for him. You see the influence of Joseph Cornell’s self-contained universes, which radiate outward. You see the satirical and urgent grotesqueries of Kurt Schwitters from Germany of the 1920’s and 1930’s, and you see the gentle wit of Joe Brainard (1942-94), a friend and guide in juxtaposing cartoon characters with elements that suggest the sublime.

In Storm at Castelfranco, the august architectural site under an ominous sky is in the background as stick figures that Ashbery borrowed from George Herriman (Krazy Kat comics) cross a bridge, as if they were inserted there in a jab of graffiti irreverence. With Ashbery, however, juxtapositions like these are more odd than defiant.

Ashbery partakes from dada’s vocabulary, but avoids its bile. His collages are delicate, clever, charming, and hypnotic in how they draw you in, like puzzles or like children’s board games that he also incorporates into the mix. They can sometimes feel like Duchampian  visual one-liners, until you look more closely. Titles that seem like throwaway lines carry more weight than they seem to. Yet throwaway is a term that defines the ephemeral elements of any of these works

The current exhibition is the third show of Ashbery collages at Tibor de Nagy, which also shows the work of Joe Brainard. The first was in 2008.

Back then, Ashbery acknowledged his affinities with the Cubists who glued newspaper clippings onto paintings and pasted advertising on canvas. He followed their lead, as he explained in a brief catalog statement then, “perhaps to bring it down to earth a little bit and make it more realist, in a certain sense. But no doubt also to introduce life, which is a mixed media affair, into their paintings. As one studies them, one’s attention keeps shifting from the ebb and flow of angular or rounded forms to the printed texts in the newspapers, announcing perhaps a furniture sale or a crime that was the talk of Paris for a week. We’re all suckers for these appurtenances of daily life.”

And those elements suck you in. Yet fine art still finds its way into these mixed media, if not just to be mocked. In The Pause That Refreshes, Pegasus and Mercury from a renaissance painting share the same space, rubbing shoulders with Coca-Cola and the cut-out of a boy with long eyelashes from somewhere in the broadsheet comics of the 1920’s. Salle d’Attente superimposes Bronzino’s 1545 portrait of Lucrezia Panciatichi in front of the interior of a railway station, as if this were a close-up in a movie poster. In the original, painted against a black background, Lucrezia, a politician’s wife, is dressed in clothes and jewels that reflect her high status. Ashbery gives us only her face, jettisoning the original’s stiff formality and placing her in a waiting room. His cold setting is still warmer than Bronzino’s original.

Even subject to Ashbery’s scissors, Bronzino stands the test of time, to be exploited by artists and by anyone else. Ashbery leaves you to make any judgments on this process.

And he encourages you to identify the show’s many inside jokes, especially his references to historical paintings.  A Dream of Heroes has Gustave Courbet’s early painting The Desperate Man (1843-45) at its core, a wild-eyed self-portrait, in which Courbet is (for our eyes) a dead ringer for Johnnie Depp. Ashbery doesn’t identify his source, but super-imposes an ad image of a man in jeans from waist-down, and another bare-chested male shown from behind. A ventriloquist’s dummy and a cluster of smirking onlookers in derby hats fill out the scene.

Scene is an operating word here. Ashbery’s compositions, with figures leaping out from all directions, evoke the charms of vaudeville or of a funhouse, if anybody around these days remembers what a funhouse is. Take a step closer to our time, and that effect feels like cinema or television advertising. Like it or not, Ashbery is telling us, this layering of shapes makes collage the medium of our experience.

Much has been made of the notion that Ashbery creates his collages by accretion, as he does with his allusive poems. No doubt. Yet he also works as a curator here, selecting images and staging them to tug the viewer in unexpected ways.  All the more unexpected since the artist whose sly boyishness comes through in this new work is almost 90.

There are plans to take a larger exhibition of Ashbery’s collages abroad, and a book is in the works from Rizzoli, organized around conversations between Ashbery and John Yau, another poet and critic.

Don’t expect a roadmap to guide you through. The mystery is what keeps you looking. 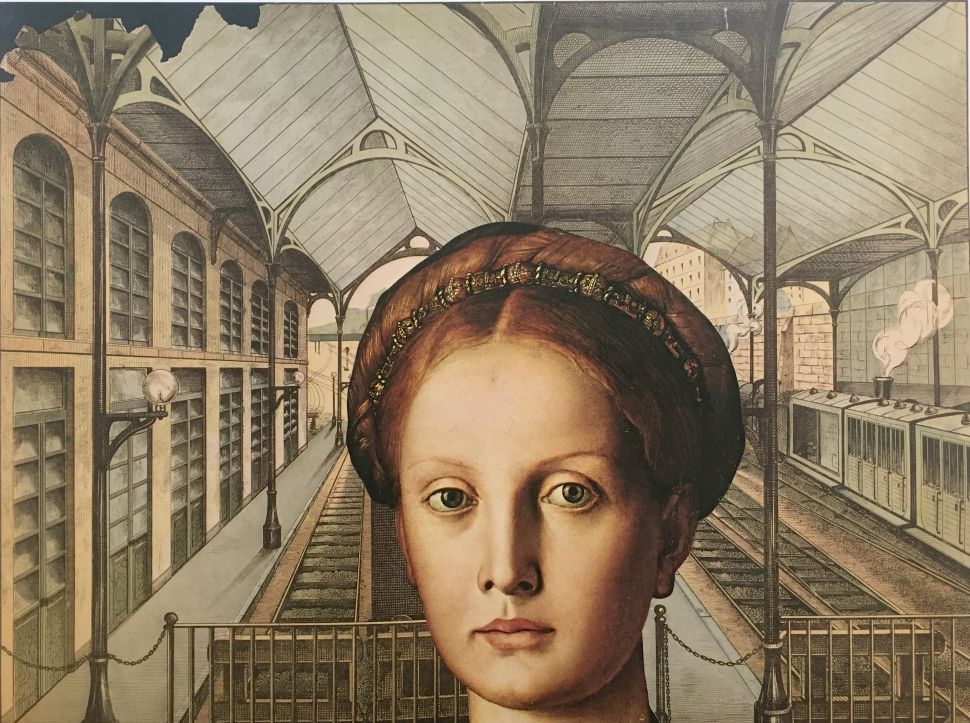