Forty years ago, John Hurt was a rare beacon of hope, a prince welcoming us to the Kingdom of Outsiders.

It is impossible to describe the 1970s to anyone who wasn’t there, who wasn’t 12 or 13 or 16 and suffocating in a comfortable stucco cage in the suburbs, making friends with the dictionary and wondering who this Erica Jong person everyone was talking about was.

You papered your walls with pictures clipped carefully from Creem or Rock Scene or NME, pictures of the sexy and the strange and the platform’d and the perm’d and the gorgeously uncouth (you could tell how precious each picture was by how yellow the scotch tape had become). You stared at the ceiling and imagined a world of rooster-sparked hair and tight pants (the unimaginable things that happened in those pants!), British accents and men who looked like Marlene Dietrich. You treasured outings to blue-lit Broadway theaters full of sad and romantic circuses, and you carefully filed away your Playbills (these were too precious to insult with scissors). You read E.M. Foster or Mao’s Little Red Book or Pete Seeger’s The Incompleat Folksinger or anything at all that seemed to explain a world others weren’t telling you about.

You knew these weren’t the best years of your life, no matter what anyone said.

Just as surely, you knew there was a world out there waiting for you.

You heard about this world, this Kingdom of Outsiders, in whispers and fragments and rumors. It goes without saying (but does bear repeating!) that without the Internet, there was no instantaneous access to anti-establishment culture. We were fed on scraps, we became fat on speculation. Tales and tips were whispered in elated tones, treasured and passed on. We constructed a world out of the crumbs of the analog era, it was barely a fishnet, but we wrapped ourselves in it. We exchanged information about what goose-bump raising freak would be on The Midnight Special or about a breast we had glimpsed on PBS; we talked about Dick Cavett and we misquoted Truman Capote or Warhol; we discussed, in hushed tones, the strange way Tommy Tune made us feel when we saw him on Carol Burnett; we pretended to know something about the world because we had seen a few pictures of Ray Davies. Most of all, we stared at postcards of The City.

Our heroes were the cynical and the sylph, the contrarian, the queer, the energized outsiders who would lead us to the promised land of ourselves.

Which is all to say, unless you were there you cannot imagine what it was like to see John Hurt prancing across the screen in The Naked Civil Servant, a British television movie based on the autobiography of Quentin Crisp, which aired in Great Britain and the United States in 1976.

Hurt expertly, sagely portrayed this beautiful man, this great, extreme supernova of the exquisite outsider, this slim-fingered, sardonic, smug, brilliant anti-jock sashaying into our world. We watched, eyes agape and jaws ajar and finger roto-dialing the phone to our friends, “Are you watching this, too?” We saw in Hurt-as-Crisp a valor, a daring, and a style that we could only hope to aspire to, a pluck that epitomized the City we would no doubt soon be invading. He had a mien that seemed both more lovely and extreme than Bowie, prettier and more vulnerable than Capote, more heroic than the fey clowns on game shows. Immediately, we took Hurt’s portrayal of Crisp into our soul and lexicon, we imitated his mannerisms and his speech patterns, he seemed to represent a freedom and attitude that was utterly lacking in our crashing, sibilant school hallways. What the peace sign had been to one generation, a limp wrist and a sarcastic aside could be to ours.

That may seem shallow, but please recall we had seen virtually nothing like this; perhaps the closest was Lance Loud, who also inspired a similar feeling in some of us a few years earlier. You cannot imagine how starved we were for this kind of fantastic figure. Imagine our world, imagine a world where you could not access the full breadth of human sexual, social, and cultural diversity in eight seconds; imagine when teenagers literally huddled in corners, smoking Kents and exchanging rumors of Jobriath and Broadway Shows and feeling completely disconnected from the Farrah-obsessed world around them. We, us future city souls caught in the beige suburban present, needed to hear someone (figuratively) scream and lisp, “Make your mark on the world by standing out, not fitting in.”

Very shortly later, here was Hurt on PBS in I, Claudius, playing the venal and destructive Caligula, a dark, satyr-like version of Crisp. This was another rumor to share and to chatter about, we took joy in seeing the way he twisted the arched-brow foppishness of Crisp into the stick-figure of a decadent villain; it confirmed for us that Hurt represented the anti-Macho, the anti-Tony Manero. And whether we were gay or straight or had no bloody idea, we knew that we wanted to be the anti-Tony Manero.

John Hurt had come into our cages and rattled our chains. Soon, we would be out in the city, out into the world, encouraged even further by Tim Curry’s sneer and Klaus Nomi’s alien cool and beyond that Morrissey and Stipe, and we would recognize that the rumors of the Kingdom of Outsiders were actually true, there really was a whole city out there where different dreams ran wild and free.

Of course, there was far, far more to the heroic, extraordinary, intense, limned and lined work of John Hurt. Others can address that in detail; but I am here to say that if you saw Hurt in The Naked Civil Servant when you were in your soppy, sad, overdramatic and everyday-tragic mid-teens, you will never forget him, and you may have even thought of him every day since. He came to represent everything that a lonely and vain would-be outsider prince in the 1970s was searching for, all of the things you never saw on American Bandstand or Emergency!, all of the sexy and attractive things you had been warned about. For many, John Hurt, precise and perfect and strange and amazing as Quentin Crisp, was our first glimpse of a world that existed in that beautiful land, a place called Not Here, where humans could be celebrated and rewarded for what made them different, not what made them the same. 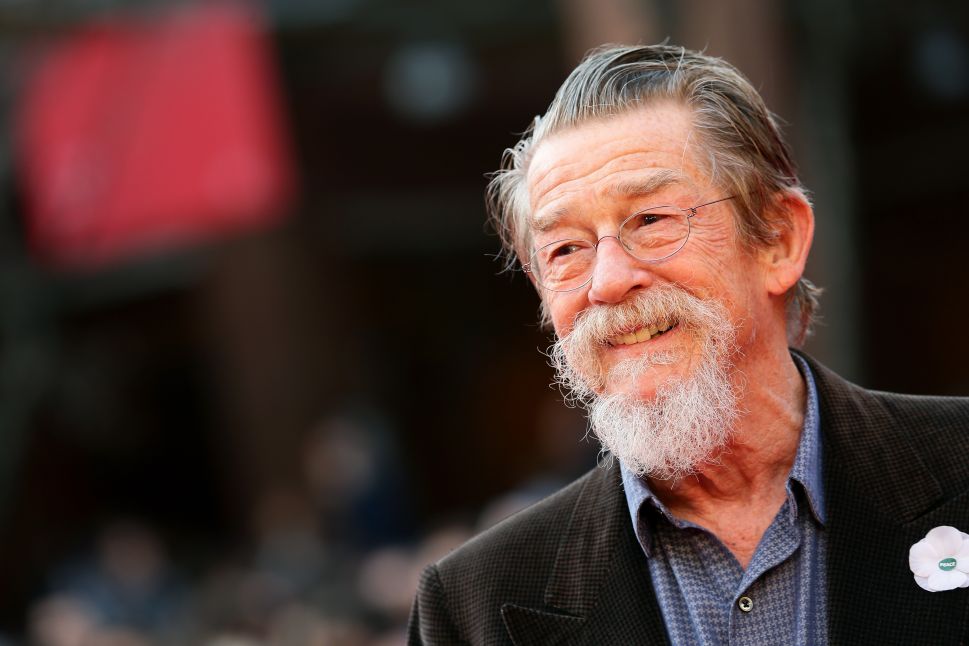