Last night, La La Land won seven Golden Globes, breaking the record for the most wins for a single movie. The awards themselves, hosted by Jimmy Fallon, opened as an extended tribute to Damien Chazelle’s feature, about one white man’s quest to explain jazz.

Why is La La Land garnering such critical acclaim, when the songs are barely memorable, the characters two-dimensional, and the premise so eye-rolling* it makes The Purple Rose of Cairo look like a documentary about the movie business? (For instance, at no point does the movie address where in Los Angeles, a city practically devoid of theaters, Emma Stone’s broke barista character could rent out a space to put on her one-night-only one woman show. Or how filming an indie movie with no script over in France could put you on a five-year track record to becoming the world’s most famous movie star. Or why owning a literally underground jazz club was a moral victory for the lead character, while getting paid to play in John Legend’s band was shown as some sort of artistic compromise. No one is forcing you to play keyboard at gunpoint, Sebastian! Just go to your girlfriend’s untenable theater production!) (I could go on here, but for the sake of brevity and my own sanity, I won’t.) I have to assume that part of La La Land‘s success is due to its bright colors and mis-identification as a musical comedy. (It’s not funny. Like…at all.)

In a dismal election year where the box office slate– filled with Moonlight, Manchester By the Sea, Arrival and even The Lobster— did little for escapism, a flight of fancy, even one as plodding and preachy as La La Land, would stand out. Much has been written about the movie’s nostalgia for a better time, but look closely, and you’ll see that beyond its flat pastiche, there’s something more troubling at the heart of this “yearning for the way things were” fairytale without a happy ending. “The past represents liberation for one group, a horror show for another,” wrote Geoff Nelson in Paste Magazine. Alison Willmore over at Buzzfeed wrote about the privilege of nostalgia, which allows the two main characters–who both exist in the present day–to reimagine themselves in their selective memories of the halcyon days of their respective art forms. (Of which, naturally, they’d be way too young to have actually lived through.) Ira Madison III took La La Land to task for its racial tone-deafness over at MTV News, and Todd VanDerWerff brilliantly tied together the movie’s themes with Trump’s ascendency in a Vox piece:

Nostalgia is dangerous not because it’s easy to lose yourself in it, but because it’s too easy to redefine the past based on whomever is in power in the present. The past is always better than the present, because we selectively remember what we want to remember. You get lost there not because it was actually better, but because you can never get back to the person you were, just as America can never become the country it was, for good and ill.

Though we’d like to believe that in the early days of 2017, we’re all wide awoke now, the supplication at the tap-dancing feet of La La Land is just more evidence that most people would like to happily remain asleep, dreaming of better days behind us.

And yet, despite all these critiques, the film is getting accolade after accolade, and is an Oscar front-runner. God help us if the Best Picture category comes down to La La Land or Moonlight. Though we’d like to believe that in the early days of 2017, we’re all wide awoke now, the supplication at the tap-dancing feet of La La Land is just more evidence that most people would like to happily remain asleep, dreaming of better days behind us.

*You’ve got to be a little bit worried when our own Rex Reed refers to a movie as “good-intentioned.” 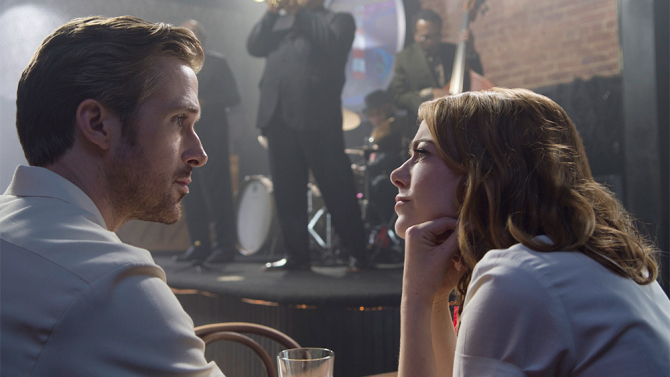