When the 35th America’s Cup (AC) sailing race takes place this May and June in Bermuda, the event will join the ranks of the Spanish Armada and the Battle of Midway as one of the largest massings of boats for competitive purposes ever. Hundreds of yachts are planning to make the voyage to the “pink island” for weeks of racing and onshore fun. First held in 1851, the AC awards the world’s oldest sports trophy—and for this event the entire AC program has not just received a makeover, it’s had a DNA transplant. As Russell Coutts, head of the AC event authority, explained “It’s not just white dots on a blue background anymore.” Coutts is of course referring to past Cup races sailed in yesteryears’ monohull boats far offshore. You had to charter a boat just to see them.

For the last AC in San Francisco four years ago, the event authority introduced superfast (40k-plus) multihull catamarans racing a 20-minute course that could be watched from the shore. This year’s races will continue that successful transition.

To reach the Cup race a team must win the Louis Vuitton challenge, where five competitors will be vying to challenge the defender, Oracle USA. A week before there will also be a superyacht regatta; the competitors there are the largest, most expensive yachts afloat. Bermuda’s strong steady breezes should allow for fast sailing.

If that were not enough, there will be the largest collection of J-boats ever—all eight of them. These boats are legendary giants, some like Shamrock V are over 120 feet. Lastly, there will be a youth regatta on the more manageable size, foiling catamarans than the AC boats. This series is sponsored by Red Bull. If you add it all up, there will be over a hundred boats racing Bermudian waters over 30 days. A flood of smaller boats are also converging on Bermuda—some in organized rallies, others just on their own.

The 2017 AC is way beyond a yacht race: It’s a nautical extravaganza.

And that is exactly what Oracle billionaire Larry Ellison and world sailing superstar and CEO of the America’s Cup Event Authority (ACEA) Russell Coutts have planned for. This is not the AC of Sir Thomas Lipton in 1899 or even Dennis Connor in 1987.

Jimmy Spithill, the captain of Oracle USA, has been training his team of nearly a decade. According to Russell Coutts, “Thru broadcast TV and our extensive social media platforms were reaching out to 150 countries thru 26 rights holders. Just our world series warmups have reached over 175 million viewers via 900 hours of programming, and we are only beginning. Our sponsors are seeing an amazing return on their investment.”

What’s going on here? The short answer is, Larry Ellison has given the America’s Cup Event Authority seed money to create a self-sustaining holding company for this event and all future ones (the AC is held every four years).

To accomplish that, Russell and his crew have had to unfurl their sail bag of every media/marketing/promotion/outreach tool known to modern sports. Usually that starts with creating programs of value for sponsors who then, according to Russell, “develop their own unique message around the cup.” However, there is a unifying theme to all this: innovation. In every way, from the foiling catamarans themselves, to the techno athletes who sail them, to the short, intense, stadium-style racing and how it is broadcast, innovation is the key.

Ellison’s Oracle, the very linchpin of innovation, is synonymous with the event.

The other brands that clearly agree with him are as diverse as the sail changes needed to win a race. Louis Vuitton is an anchor sponsor that lends its name to all qualifying races. BMW is a key partner. Red Bull also has its own branded race program for youth 21 to 24; they are readying the next generation of sailing greats. Like-minded sailing sponsors like Sperry shoes are of course all in. Ditto rum—what would a regatta be without Goslings rum to pour?

Russell wants all his partners to be visible at all times. “We are working with broadcast graphics experts and have created a virtual visual package for sponsors like BMW. For them we have created a Fly Time clock that shows the amount of time the boats are foiling (up and flying out of the ). This is incredibly innovative as winning the race is correlated to the amount of foiling time they can do.”

Red Bull of course is interested in the younger demographic, and for the ACEA sponsorship has a 16-nation program. Over 100 sailors have been on the fast catamarans. “This is the new generation we are promoting with these young sailors, we are telling their stories and showing their personalities,” said Russell.

The social media component is also in high gear. The ACEA has set up links to Facebook, Instagram and Twitter. Each brand does the same with its AC participation so that the branded message of the whole sailing experience is amplified across all the platforms. The AC alone has 657,000 social media followers. They have viewed over 17 million videos in 2016. In 2016 Facebook impressions were at 187 million.

Yet, it all still comes down to the wind, the sailors, and the boats. No amount of clever marketing and branding can change that. In Bermuda, which according to Russell is the “ultimate venue,” the world will have another chance to see these forces in play. This year the America’s Cup participants are set to fly into the future…much like the boats they are sailing. 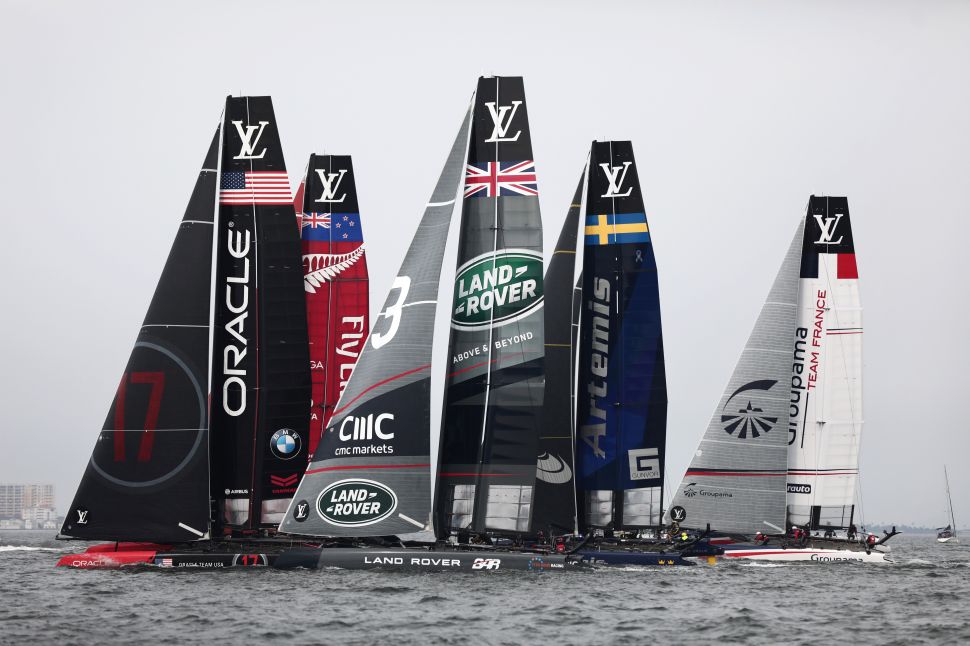