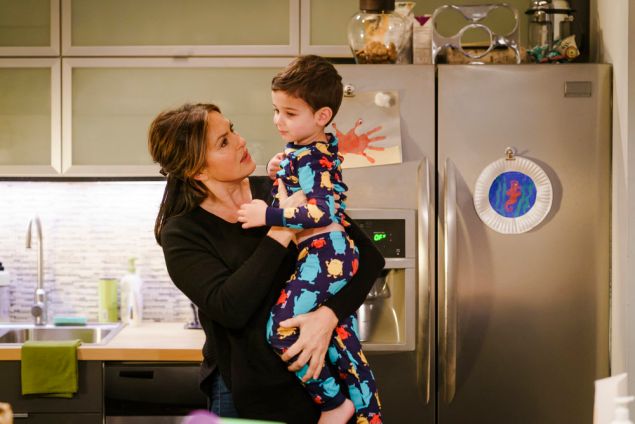 Rarely does a procedural drama step outside the box to make a statement about what it truly means to be a parent. Leave it to SVU, after nearly 400 episodes, to find the right way to do just that.

The episode opens with Olivia taking a personal call that causes her to take her eye off of Noah for a split second. In that moment, Noah climbs on a counter, teetering dangerously; all in an effort to get another cookie from a jar perched high up on the fridge.

Cut to a woman tucking a little boy into his bed for the night. She treats the child, Theo, quite lovingly, but it’s soon revealed that this is his nanny, not his mother.

As the nanny, Gloria, takes her leave, after offering to stay the night with the boy, his actual mother, Nadine, breezes into his room, and barely touches him as she says good night. She, however, makes sure that Theo slips on some noise-canceling headphones. Quickly, it becomes clear why – she’s having a party.

The next morning, Gloria arrives and is pretty quick to discover that Theo is missing from the apartment. As the detectives investigate, Nadine is unglued about her missing son, but seemingly not concerned enough to put on clothes and clean up after the party – which obviously featured some illegal drug activity.

Through all of this, Nadine keeps insisting that she’s a ‘good mother.’ Assuring her that they’re just concerned about finding the boy, members of the squad question both Gloria and Nadine’s sleepover pal, Kat. They also go after a guest from the party who turns out to be a private investigator hired by Nadine’s former spouse to collect evidence against Kat in a custody dispute over Theo.

In an interesting, and very welcome, twist, Nadine’s ex is a woman, Fran, who, while married to Nadine never adopted Theo, but now wants primary custody of him.

After a lot of very frustrating dead ends, they discover that Gloria’s brother kidnapped Theo at her request. Gloria, who’d taken care of Theo since his birth and grown to love him, felt that Nadine was a bad parent.

When the detectives catch up with Nadine she’s trying to make a break for Mexico with Theo. She insists that she’s taking him to a farm there to take care of him.

As he’s pulled from Nadine’s arms, Theo’s clearly not happy, crying and calling out for her, obviously wanting to stay with her.

In the end, Theo will not be returning home right now to live with his mother Nadine but will be staying with Child Protective Services, at least until a hearing in family court.

And Gloria, no matter what her intentions for Theo, having broken the law, will face charges.

After the case is resolved, Olivia having put off Ed’s phone calls a few times, finally has a conversation with him in her apartment. She tells him that although they’ve both tried to make the relationship work, it just isn’t. And, at this time in her life, she’s still dedicated to the job (“this who I am,” she says). She also tells him that now that she has Noah she has to give him all of her love and attention.

While it’s a rather heartbreaking end to the episode, it’s an appropriate way to close it out, given what Olivia has just seen. She, and her squad, watched as a little boy, in the absence of attention from his mother, grew to love his caregiver, who clearly became a substitute parent. This isn’t so far-fetched as children cling to the person they feel loves and supports them the most.

What a statement to make as it seems to have become a societal issue that a lot of people have kids because it’s a logical step in life rather than evaluating if they’re really ready to be parents.

Sadly, there are adults who just don’t understand the responsibilities that come with parenting a child.

This is where the difference between being a true parent and just being a primary caregiver comes into play. A caregiver simply makes sure that a child has the means necessary to survive – food, , (hopefully) education and such, while a parent not only assures that there are those things but provides the child with emotional support, willingly and lovingly. Being a parent means compromise and sacrifice and putting another person’s needs ahead of your own. Again, sadly, many people just don’t understand this.

And, to be clear, none of this has to do with whether the adults and children are related by blood or not. In this vein, it wasn’t unrealistic to have Gloria become so attached to Theo given what she was seeing every day with Nadine.

Nadine’s continued insistence that she was ‘a good mother’ was a great way to show just how some parents view their role in their child’s life, as those around them see their actions and question their real commitment to their offspring.

An interesting facet of this episode was that it was sort of scaled down in terms of the investigation aspect of it – there was very little technology used and not much in the way of forensic discovery. There were good old-fashioned interrogations and boots-on-the-ground deduction, which is what made the subtext that much more intriguing. (Of course, there were a couple of foot chases, as there had to be given the title of the episode.)

Because of the somewhat ‘tone-downed’ course of the criminal investigation, there seemed to be more time in the episode to scrutinize the parental aspect of the storyline. The narrative made statements about time and money – Nadine, a free spirit might have more time to spend with Theo, whereas Fran, a doctor, was heavily scheduled with work. Conversely, Fran might be better able to provide for the boy than Nadine. Subtlety, this furthered the argument of time versus money, which is something that not only proliferates in parenting but in life in general, right?

It was also timely and interesting to see the push and pull between the two women and the very real legal challenges they face as a same-sex couple with a child. Nadine, having given birth to the boy, is his biological mother and while she and Fran were married, under the law Fran has no parental rights unless she adopts Theo. This aspect of parenting is still troublesome for same-sex parents and it is curious as to whether laws will ever change with regard to this.

Having said this, Theo was seven, it’s curious as to why hadn’t Fran sought to adopt him when he was first born. The answer to this question didn’t seem very clear here, but her reluctance to do so in the past was needed to make the very point necessary about the legal issues two moms or two dads face when trying to create their family.

Getting back to Olivia and her involvement and takeaway from this case, in the end she made the decision to break with Ed and focus on Noah, but while this is one way to go, it seemed a bit curious that this case seem to strengthen her resolve to her job rather than maybe making her think she should spend more time with Noah by cutting back at work rather than cutting ties with Ed.

Rollins on the other hand, looked at Nadine with chagrin at first but then seemed to have a wake-up call and realized that no matter what your mothering skills, the possibility of permanently losing your child is devastating. She seemed suddenly overwhelmed with her role as mom to baby girl Jessie. (Thank goodness Carisi is stepping in to help!) Could this lead to Rollins’ questioning her commitment to the job in the future? That would be something interesting to see – and to witness a possible conflict with Benson, the two moms in the squad room, about this.

And, while it was sad to see Olivia end another relationship, there’s still hope that the right person, the right partner for her, will come along. In the meantime, she’s doing what she thinks is right for her child, and that’s what’s important.

In the end, this episode was an intriguing study about what it means to be a mom (that #MomsOnSVU twitter hashtag for the episode was on the money!).

There were moms everywhere here, and just like in the real world, all were flawed in different ways, but every one of them was doing what they thought was best for their child. 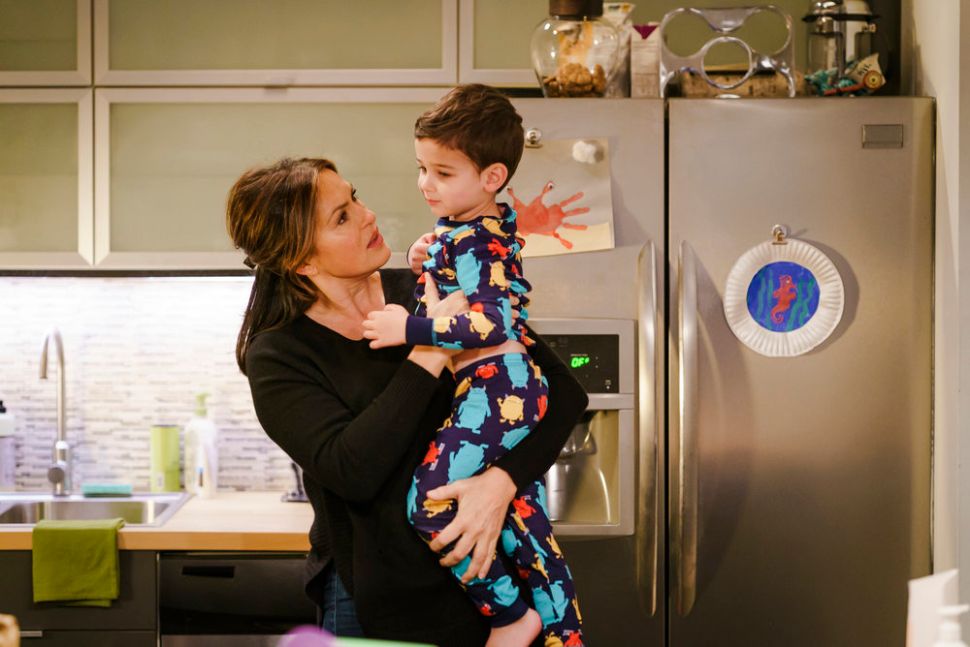