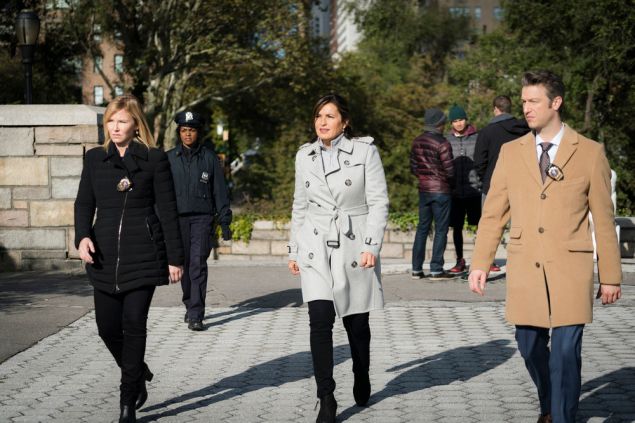 It’s not entirely clear what’s sadder – that if you’ve watched SVU at all you knew where the opening scene of this episode was headed, or that in reality shit like what went down in this episode really does occur, and probably more than we know.

But, what unfolds in this episode speaks not only to the often revolting thought process of some people, but also to a type of progression of thought that has, or maybe hasn’t, evolved with regard to women and the right to consent.

This episode opens with a party in full swing as the guest of honor, an elderly businessman, Lawrence Hendricks, ogles several scantily clad young women in attendance. (Astute viewers can see where this is going and again, it’s not easy to watch knowing what’s ahead.) As the celebration wraps up, a young female bartender, Sarah, packs away the glassware while Eric, Lawrence’s grandson, flirts with her, convincing her to share a drink with him.

Cut to the next morning and Sarah finds herself sprawled out in the unfamiliar apartment with her pants around her ankles. She adjusts her clothing, grabs her things and races straight to the 16th squad room where she tells Benson that she believes she’s been raped. Once they reach the hospital, Sarah tells Benson that she doesn’t remember anything about the night before, other than that she was working the party.

The detectives talk to Eric who insists the sex was consensual, and after a little more of her memory comes back, Sarah realizes that this is correct. However, Sarah’s rape kit reveals that there is another sample from that night, indicating the after she had sex with Eric, someone else raped her.

Further investigation of the sample shows that it was Lawrence who raped Sarah, but the elder Hendricks, like his grandson, claims that Sarah willingly had sex with him.

Sarah is adamant that she didn’t knowingly have sex with the 75-year-old man.

When her toxicology report indicates that there were Quaaludes in her system the night of her rape, the detectives believe that Lawrence drugged the young woman. When Sarah and Lawrence talk during a ‘controlled meet,’ he admits to having sex with her, but seems confused, even calling her by the wrong name.

After he’s arrested for rape, Lawrence’s daughter, Cynthia, steps in to have him declared mentally incompetent in civil court. Lawrence, sly as he is, avoids really answering any questions clearly, trying hard to insinuate that he thinks he’s currently living in the 1970s.

Eric, not wanting to believe that his grandfather has done this, refuses to tell the truth about the night Sarah was assaulted, even when his father pleads with him to do so. It

It takes Eric’s father, Lawrence, Jr., revealing that years ago Lawrence Sr. raped Eric’s mother to convince the youngest Hendricks to testify against the eldest member of the family.

With Eric’s testimony, Lawrence Hendricks Sr. is convicted of rape.

While not a particularly gripping or action-packed episode, what this installment did do was interpret the different attitudes expressed by these three generations of men toward women.

Grandfather Lawrence Sr. felt it was his right to do whatever he wanted with regard to the women in his life. Lawrence Jr., while appalled by his father’s behavior, even going so far as to step away from a successful company to distance himself from the man, was still silent about what his father was doing, even after it involved his own wife. Young Eric was willing to believe his grandfather wouldn’t do such a thing, almost covering for him, until his father spoke up.

So, Lawrence Sr. = no accountability, just taking what he wanted. Lawrence Jr. = silence, even in the face of wrongdoing, and Eric = confused, in a grey area, but ultimately did the right thing.

What all of this says is that old school thinking can no longer be tolerated. It’s not ok to do what you want without consent, no matter who you are. And, furthermore, silence in the face of such acts is intolerable as well.

All of this speaks to a bigger picture, as evidenced by the opening of this piece – watching this we knew what was coming: girl takes drink provided by a guy and she’s raped. Admit it, even if it was just for a moment, you thought, ‘oh, she shouldn’t do that.’ But isn’t it horribly sad that is immediately where our minds go? That we go there because history–and really, present day–tells us that this is what’s going to happen if we don’t have our guard up every second?

So, given this, although it was gross to see the elder Hendricks and his actions, it was conversely somewhat heartening to see that the youngest male, Eric, not only didn’t do anything sinister, he did the right thing, standing up to his grandfather on Sarah’s behalf, and he also seemed to genuinely remorse for what happened to Sarah, even though it really wasn’t his fault.

In the end, Eric did the right thing because his father, the detectives, and hopefully his conscious told him that that’s the person he should be.

This, and a few other elements of this episode, clearly presented how things have changed, and just how they haven’t, when discussing men’s attitudes towards women.

Eric represents the hope that with each new generation, men will learn that certain things when it comes to intimate contact are never ok, and that, unlike his father, he should speak up should he witness anything inappropriate or wrong.

Yes, there was a money, power and privilege aspect to this storyline, and it featured a younger woman who covered up for her rich older husband, (all of that icky), but at its core it was about these three men and how hopefully evolution in the areas of respect, contact, consent, protection and advocacy is happening.

SVU has long taught women to be on guard against predators, and rightfully so, but rarely does it make what has to be an often-thought statement like, “Men! It’s not okay to rape women! Stop doing it!” in such a uniquely bold fashion.

In the end, the main case of the episode was clearly resolved, but what struck home was that just as this particular case wrapped up, there was another one right behind it, and another and another, and yet another. The phones in the 16th precinct, the Special Victims Unit, often also known as the Sex Crimes Unit, just kept ringing with victim after victim needing help. Seeing that, knowing just what it really means, hurts in so many ways.

Will it ever end? Sadly, that is a depressing question that may never be answered, but at least SVU keeps trying to make it a reality. 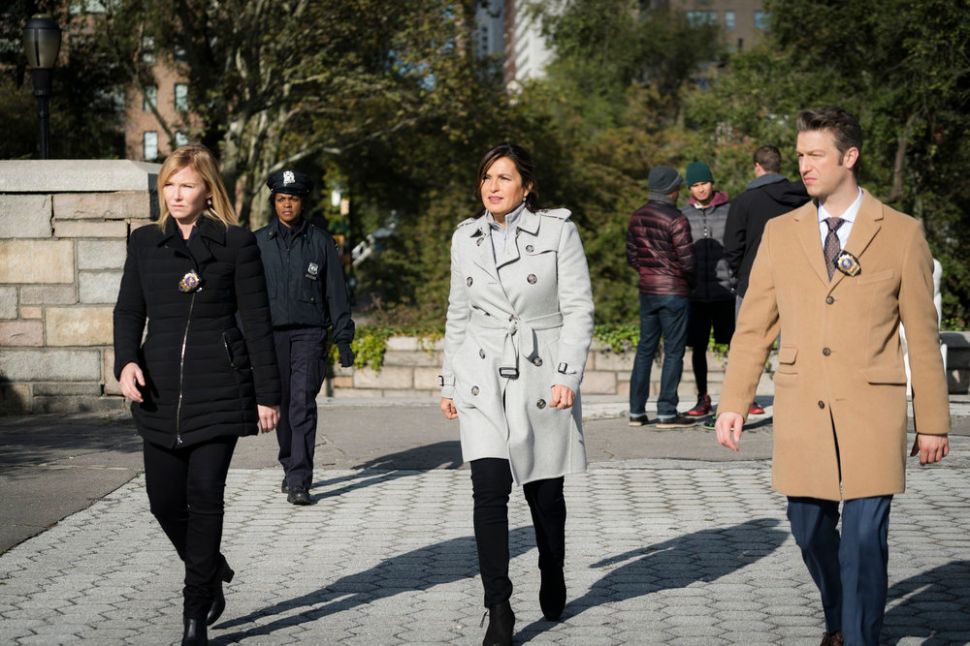