This year, Mein Kampf, Hitler’s autobiography, in which he laid the groundwork for a policy of extermination against the Jews, became a bestseller in Europe.

Having taken a look at what has been going on within recent additions to the European community—including former Soviet republics that broke loose from Russian dominance—one begins to see why the brutal dictator is experiencing a renewed wave of popularity.

Last Saturday, for example, it became known that the Lithuanian Radio and Television broadcasting corporation (LRT), funded by the Lithuanian government, temporarily took off the air the popular TV show Guess the Melody, after a scandalous video surfaced, causing public outrage, Delfi reported.

According to the LRT’s assistant director Rimvydas Paleckis, on Friday night, during a live broadcast of the show, one of the participants—popular Lithuanian movie and theater actress Asta Baukute—having recognized the melody, became so excited that she victoriously shouted “Yeah! Yeah!” and jumped off her seat.

She was about to win the contest.

Standing to her full height in her leather coat and dancing out of excitement, she put both the index and middle finger of her left hand to her upper lip—to indicate Hitler’s mustache—and raised her right hand in a Nazi salute high into the air.

She could not contain herself.

“Judėjas! Judėjas! Judėjas!” (Jew! Jew! Jew!) she yelled in Lithuanian—letting it be known to the cheering studio audience and the supportive show host that the melody in question belonged to Lithuanian composer Simonas Donskovas.

Donskovas, as the readers already have figured out, is a Jew.

“I am in shock,” LRT’s assistant director Rimvydas Paleckis said the next day.

“Such behavior does not correspond to the values promoted by the LRT. As a person in charge of the channel’s programs, and as assistant head [of the LRT], I ask our viewers for forgiveness. There will be no shooting of the [next] show on Saturday. The show is closed,” Paleckis finished.

There was no immediate condemnation from the Lithuanian artistic or political class to which this 49-year old actress and mother of three belongs. From 2008-12 Asta Baukute was a member of Lithuanian Parliament representing the Party of National Revival.

Baukute is also a recipient of the Gold Scene Cross from the Lithuanian Ministry of Culture.

In neighboring Latvia, she might have found a sympathetic ear in one of the leading Latvian politicians, member of Latvian Parliament Karlis Serzants. Last March, during his interview to the Latvian Radio 4’s “Day After Day” program, this Latvian MP blamed representatives of “smart nationality” and “lawyers” for subversive anti-Latvian activity and propaganda taking place in Latvia, Regnum reported.

In Parliament, Serzants represents the coalition of the Green Party and the Party of Peasants to which the current Latvian President belongs.

At the time of the interview, Serzants was working on a law to limit freedom of expression in Latvia in the face of looming Russian aggression. When asked what nationality did he mean, Latvian MP gave a straightforward answer: “I meant Jewish nationality. They [Latvian Jews] read laws, they always walked on the edge—not stepping over it. For them, it will become more difficult to continue now [with anti-Latvian subversive activity once the new law is passed].”

Among people who angrily reacted to Asta Baukute’s Nazi salute on Lithuanian TV were those who immediately recalled the ugly advertisement by a local gas equipment company from another Baltic state—Estonia—in 2012. The gas company promoted its equipment with a picture of the Auschwitz gates and the caption “Gas heating—universal, comfortable and effective.”

In another campaign, a picture of emaciated and dying prisoners of Buchenwald concentration camp was used by Estonian newspaper Eesti Ekspress to advertise diet pills. “EINS, ZWEI, DREI … and magic pills from Dr. Mengele will do the work for you! In Buchenwald, there were no fat people,” the caption read.

The paper was apparently untroubled by the detail that Josef Mengele, notorious Nazi murderer-physician who experimented on Jewish victims, did so in Auschwitz—not Buchenwald.

These three nations are in the European Union now and are NATO members.

Meanwhile, Ukraine, mired in revolution, hasn’t quite gained admission to the European club. But it can still do the anti-Jewish thing pretty convincingly. On January 1, on the main streets of the Ukrainian capital of Kiev, during a torchlight procession commemorating the birth of Nazi collaborator Stepan Bandera, hundreds of his followers shouted “Juden-giet’! Juden-giet’ (Jews-out)!”

For her part, the same Saturday morning as the Guess the Melody show was canceled on Lithuanian public TV, Baukute, actress and ex-PM, provided her own assessment of the situation. “If you are looking for conflict where there is none, look someplace else,” she was quoted by Delfi. “This is an entertainment program, not a political one.”

The actress said she was surprised that the show was canceled. 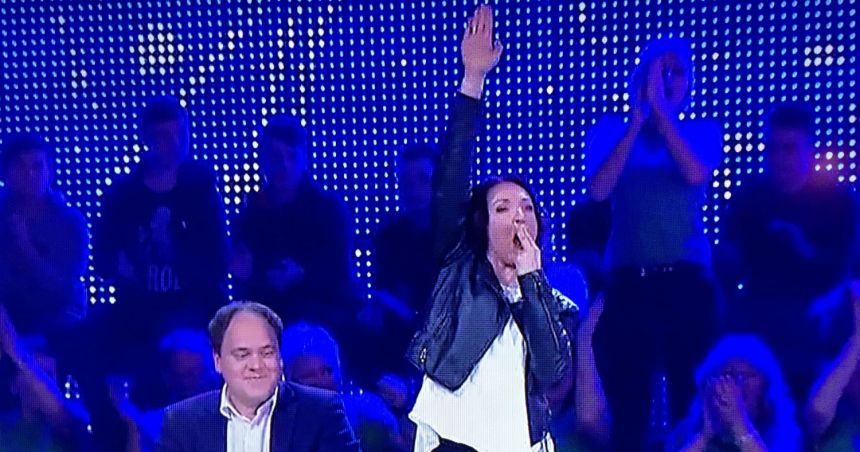