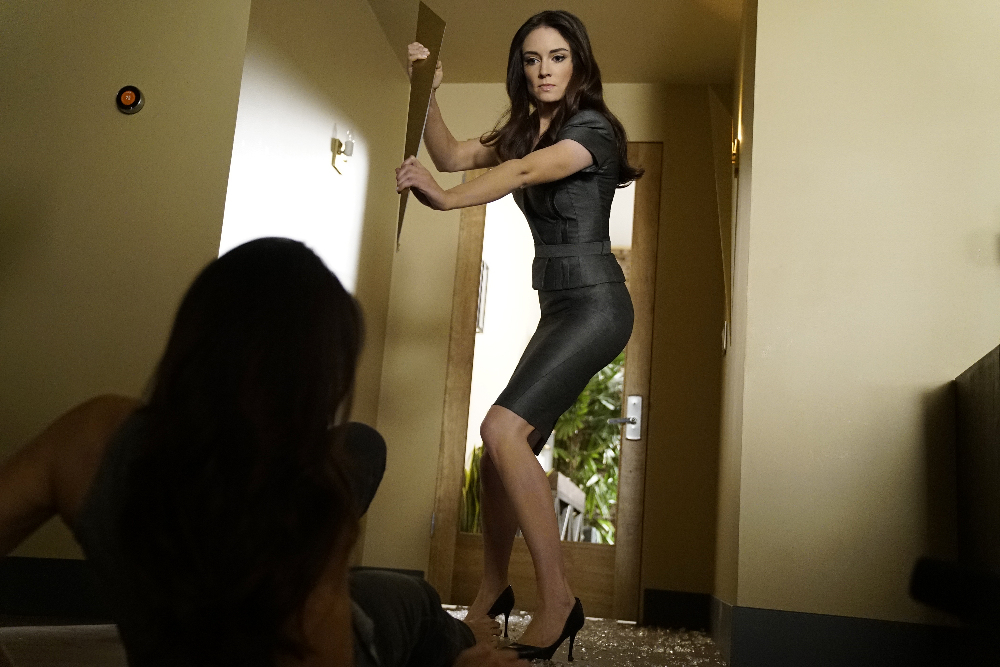 Isaac Asimov’s first law of robotics states that a robot may not injure a human being or, through inaction, allow a human being to come to harm. Marvel’s Agents of S.H.I.E.L.D. must really hate Asimov because we are about to see a lot of robot harm. Not only that, but we get to find out exactly how May ended up as a robot! The episode “Wake Up” starts five days before the present and gives us an explanation of all of the behind-the-scenes shenanigans that happened to May. It all started when May was on her way to visit Aida when she was interrupted by a very jumpy Holden Radcliffe. He’s at the level of jumpy where he is overly suspicious and had he been this way in earlier scenes, we definitely would have know he is still a villain. Anyways, he calls Aida and gives her the heads up about May and activates “Sunset protocol” which I guess is the order for “sedate May, take her clothes, and use them to dress Robo May.”

Human May wakes up in a spa. And then she wakes up again in a spa. And wakes up again. It’s a very Groundhog Day-influenced scene. May quickly realizes something is up and punches her way out of the dream and realizes she’s hooked up to some machine. This is the scene we saw from the episode prior where she tries to escape and takes on Aida only to be sedated again. We get to see a bit more of what happened after that moment like how Aida is sinisterly questioning if May actually needs to be alive (to which Radcliffe reminds her that they aren’t killers) and that there is a second LMD somewhere out there – Cue paranoia.

The other agents are arguing about what to do with Senator Nadeer again and like every week they still can’t do anything about her. Daisy is supposed to sign the Sokovia Accords so she can work within the legal parameters of the Marvel Universe but she will have to be questioned by a committee first – which just happens to include Nadeer. Coulson wants to use this opportunity to bug Nadeer’s office to keep tabs on her but Talbot refuses. And when the conversation is directed to May (still Robo May) she remains distracted. She’s still dealing with the whole “Oh no I’m actually a robot” thing.

Now, assuming there is a second LMD out there, we are to believe it’s one of the agents. Simmons mentions that Daisy and Coulson don’t really seem like themselves, which certainly helps the paranoia. The same paranoia continues to the next scene where we watch Yo-Yo and Mack finish having sex. Like she is still literally still on top of him finishing up a thrust as she crawls off of him. I mean I’m not shaming at all but I was really not expecting that in a superhero show with robots. We get a little bit of post coital pillow talk and Yo-Yo mentions that Mack’s arms don’t even feel real (she says it in a sexy way but it can be taken in a “maybe he’s the robot” sort of way). Then Mack gets a mysterious text message and says he won’t be on the next mission but doesn’t say why. MAYBE BECAUSE HE’S GOT A MISSION OF HIS OWN?! LIKE A ROBOT MISSION?! 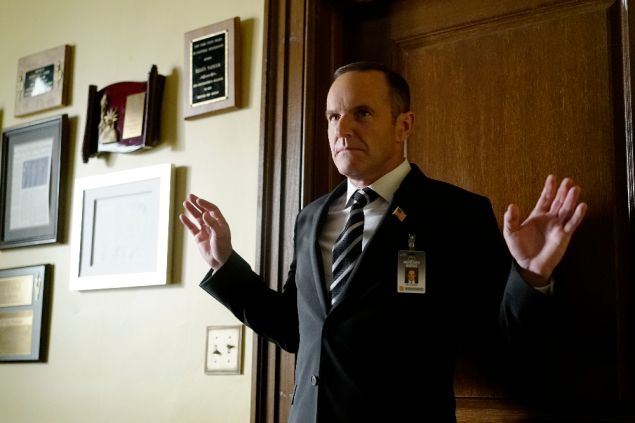 Now a lot happens at this little trial. While Daisy is questioned to grant her access to sign into the Sokovia Accords, Coulson and Yo-Yo decide they are going to still bug Nadeer’s office despite Tablot’s warnings. When the questioning gets to Nadeer, she blames Daisy for robbing $7 million dollars from banks during her vigilante days and then brings out Coulson and Yo-Yo who she arrested before they could set up surveillance in her office. Nadeer claims that S.H.I.E.L.D. is still a criminal organization and a full investigation will need to be. So everything that could have went wrong, did go wrong. Coulson realizes that there has to be a leak in S.H.I.E.L.D. for Nadeer to know their plan and accuses Talbot. Talbot doesn’t take too kindly to the lack of faith Coulson has in him and he even questions if S.H.I.E.L.D. should continue to exist.

Now back to the two Mays. Human May wakes up and attempts to escape the machine she is strapped in while Aida is out of her room. She moves from room to room, and has to fight Aida a couple times. In the last fight, May kicks Aida off of the balcony only for her to disappear into data. Another Aida shows up and tells her she is in a program called the “Framework.” It’s all a simulation. May couldn’t relax in the spa simulator because that’s not the kind of person she is; she needed a villain to fight and something to work towards so Radcliffe designed this storyline. Each time Aida wipes May’s memory, she gets further and further through the story but the story isn’t being designed fast enough to keep up with May and she is determined to beat it. Meanwhile Robo May has been talking to Fitz to try and learn more about if Aida knew what she was doing or if it was all her programming. She even visits Radcliffe to ask him what’s happening to her. He’s just excited to see her struggle with her sense of humanity. She threatens to tell Coulson but he claims she is programmed to not want to do that and when she tries to attack him, her body won’t let her. Just then Coulson, Fitz, Simmons and several armed agents all storm into Radcliffe’s home and arrest him. Turns out Fitz wasn’t just fascinated in why Aida’s programming failed but also who was behind it. When Coulson asks why Robo May is there, true to her programming she lies and says it was because she figured out Radcliffe was behind it all too. 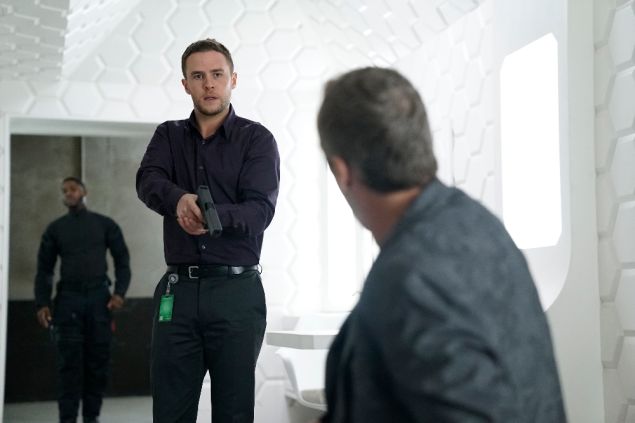 We also learn that Mack wasn’t doing anything sinister and find out that he had a daughter named Hope. She died a few days after her birth 11 years ago and it would have been her birthday that day. He was spending it with his ex to be supportive but he shares this all with Yo-Yo and it’s a nice gesture of trust. Meanwhile, Fitz confronts Radcliffe and he talks about how he wished he were wrong about him but can’t believe that Radcliffe could betray him like that. Radcliffe tries to defend himself to Fitz but there is a moment where something clicks with Fitz and he goes to grab a guard’s gun. He takes aim and shoots Radcliffe only for the bullet to bounce off of his skull revealing metal beneath it. HE’S THE ROBOT!!!

Where is the real Radcliffe? He is with Senator Nadeer watching the surveillance footage from Robo Radcliffe’s eyes. Apparently the leak was Nadeer using the severed Aida head to spy on them and Radcliffe has been working with her this whole time! Dun-dun-duh! But before their partnership can be official, Radcliffe has to meet The Superior – which I still have no idea who that could be. And as for Human May? They moved her body to a new location and she is in a new simulation. Radcliffe figured that she would never stop fighting because there had to be a battle she already lost. So if she could have won that battle, she would never have to fight again. Which battle are we talking about here? Yup. She’s reliving Bahrain and this time, the Inhuman girl isn’t crazy and May actually saves her. What does this mean for the May we all know and love? I guess we’ll find out next week! Stay tuned, True Believers! 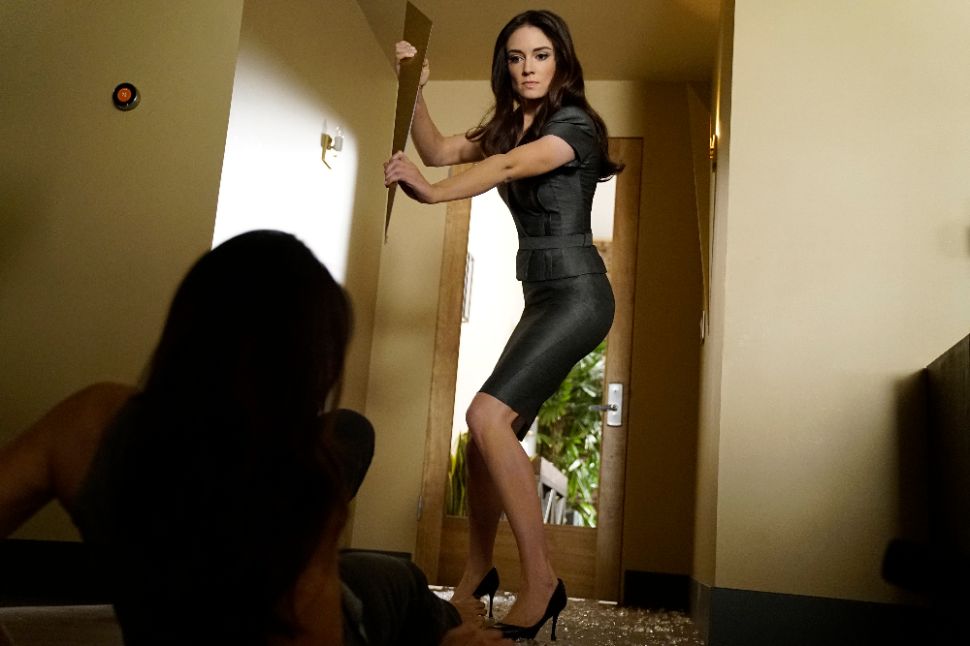