‘Imagined Dialogue For’ is our series by the hilarious and talented Chris Scott, of Reviews of Movies I Haven’t Seen fame. Next up? Chris takes a stab at guessing what happened in Meryl Streep’s Golden Globe acceptance speech for the Cecil B. DeMille Award. 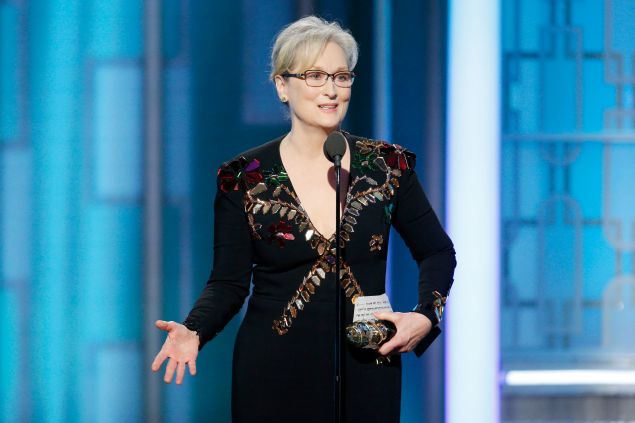 During Sunday’s 74th Annual Golden Globe Awards, Meryl Streep was presented the Cecil B. DeMille Award for lifetime achievement. Her politically charged acceptance speech was met with a great deal of praise and many detractors. I confess that I’ve not yet seen the speech myself — I’ll get around to it at some point — but here’s what I think she said, based on the public’s reaction.

Thank you so much. Thank you, Hollywood Foreign Press. Thank you to all the warm and familiar faces I see in the audience tonight. Never in a million years could I have gotten where I am today without your love, support, and encouragement.

Obviously, politics are on everyone’s minds lately, so let me just get this out of the way. I don’t like Donald Trump. I think he’s a pretty bad dude in a lot of ways, and I don’t think there’s really any chance of him being a good president. Perfectly okay if you disagree with me on this — everyone’s entitled to their own opinion. This is just personally what I think. Okay?

Speaking of ginger, here’s a little PSA for you. I was cooking dinner with my friend Louis recently, and he took the fresh ginger root out of the cabinet and started peeling it with a peeler. I said, “Whoa! What are you doing?” He said, “I’m peeling ginger.” I said, “Just use a spoon!” and he looked at me like I was nuts. Not the first time this has happened to me. A lot of people don’t know this. So let me just say it to everyone: You should always use a spoon to peel ginger — never a peeler or knife. It’s not necessary and will end up actually peeling off too much of the ginger along with the skin. It’s extremely wasteful.

A lot of actors have a hard time watching themselves in the movies they star in. I’m no different. But check this out, because this is even crazier. I’ve only seen one movie in my entire life. Isn’t that weird? Guess what movie it was. I’ll tell you — Alfred Hitchcock’s The Birds. You guys ever seen this thing? I saw it when I was twelve. It’s about birds turning against humanity and attacking and killing everyone. It’s frickin’ incredible. Anyway, that was the first movie I ever saw and when it was over I said, “Well, nothing’s ever going to top that!” and I just straight up never watched another movie. I’ve never even watched The Birds again, so sure was I that I would never be able to replicate the near-orgasmic experience of seeing it for the first time. It remains a treasured memory. Nothing more, nothing less.

— which is why I always carry a fork around. I’ll tell you guys one thing I really don’t understand at all which is hail. It’s like, not snow. But obviously, it’s not rain either. I can’t really comprehend how it happens. Especially if it’s not even cold out.

One person who really sucks, by the way, is Regis Philbin. No disrespect to any fans out there. But I have had probably two dozen interactions with this guy and every single one of them has been deeply, deeply unpleasant. Literally, my very first memory of him was him coughing into his hand and then extending it to me for a handshake. I looked him right in the eyes and said, “Are you kidding me?” He looked all confused like he had no idea why I wasn’t interested in smearing his germs all over my palm. THEN, the SECOND time we met…

— which is not okay, and I told him that, but the man is like a social wrecking ball just plowing through niceties and little formalities we all take for granted. Like, oh I don’t know, maybe don’t playfully bop someone’s nose when you barely even know them. Who does that? He’s done this to me not once, not twice, but FIVE times by the way. FIVE. I swat his stupid hand away every time. He just doesn’t get it. It’s insane.

— and granted I had had quite a lot of wine by this point but finally I was just like “Regis, you are the weirdest son of a bitch I have ever met. Full stop.” He started laughing and I said “No, I’m not kidding. This isn’t a joke. Like I don’t know if our personalities are just completely, totally incompatible or what but it is like trying to interact with an alien every time I’m around you. Like I feel like your existence is the universe playing a long prank on me or something, and the punchline is going to be me eventually pushing you in front of a bus.”

— which is why I think in, say, 5,000 years — if we’re still here — there will be only one language in the world, and it probably won’t be English. It probably won’t be any language that currently exists right now, but more like a singing. Like people will sing to each other, and that’s how we’ll communicate. Because the different notes will have different meanings, if that makes sense. Anyway, this is just my gut instinct. Thank you again for this award. I really appreciate it. 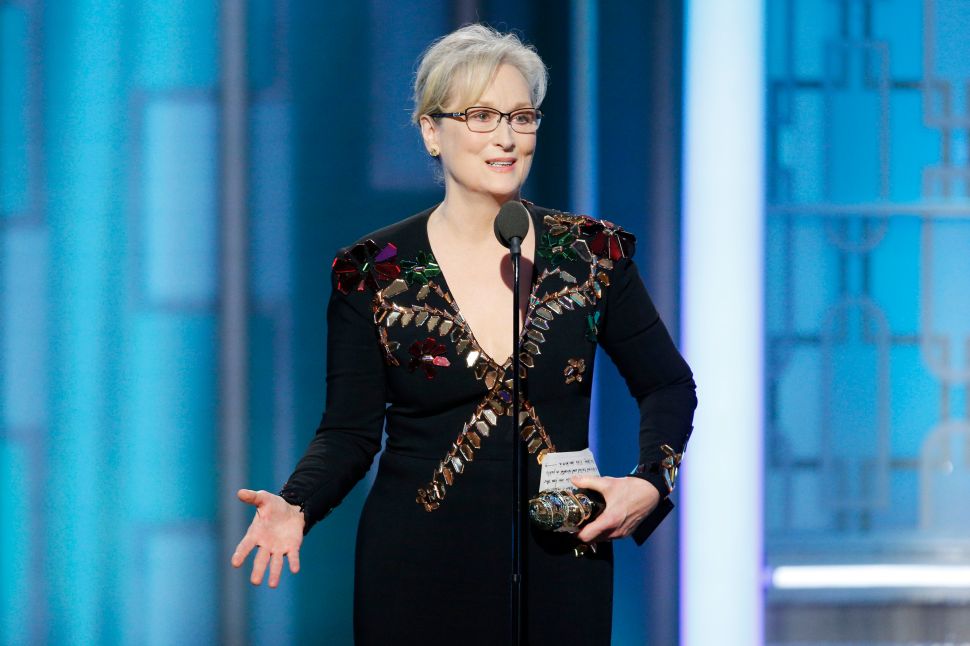