On January 6, Michelle Obama gave her farewell speech as first lady. Obama’s previous speeches have been praised, and touted as contributing factors to her immense popularity with Americans, which surpasses that of any other figure within the Democratic Party. Her influence has provoked speculation that she may run for public office after the Obamas leave the White House, though she has yet to express interest in doing so.

Throughout the speech, Obama primarily focused on offering praise to school counselors from around the country, as she has for the past two years. At times, the speech became emotional. Obama and the audience fought back tears.

The speech provided hope to Democrats begrudgingly forced to reconcile with the end of the Obama administration and the transition to a Republican presidency under Donald Trump.

“Something better is always possible if you are willing to work for it and fight for it. It is our fundamental belief in the power of hope that has allowed us to rise above the voices of doubt and division of anger and fear that we have faced in our own lives, and in the life of this country,” Obama said. “Our hope that if we work hard enough and believe in ourselves, then we can be whatever we dream, regardless of the limitations that others may place on us. The hope that if people see us for who we truly are, then maybe, just maybe, they too will be inspired to rise to their best possible selves.”

Though Obama has always maintained class by refraining from engaging in politically charged rhetoric, she singled out millennials who have grown up regarding her as a highly influential figure. Young people are faced with fear, steeped in uncertainty, trying to anticipate what the next presidential administration will mean for their future.

“For all the young people in this room and those who are watching, know that this country belongs to you—to all of you, to every background and walk of life. If you or your parents are immigrants, know that you are part of a proud American tradition,” she said. “The infusion of new cultures, talents, and ideas, generation after generation—that has made us the greatest country on Earth. If your family doesn’t have much money, I want you to remember, in this country, plenty of folks, including me and my husband, we started out with very little, but with a lot of hard work and a good education anything is possible, even becoming president. That’s what the American dream is all about. If you are a person of faith know that religious diversity is a great American tradition too. In fact, that’s why people first came to this country, to worship freely. Whether you are Muslim, Christian, Jewish, Sikh, these religions are teaching our young people about justice, compassion, and honesty. I want our young people to continue to practice those values with pride.”

In a not-so-subtle slight toward Trump and his controversial rhetoric and proposals to build a Muslim registry, and a wall on the U.S.-Mexican border, Obama added, “Our glorious diversity, our diversities of faith, of colors, and creeds, that is not a threat to who we are, it makes us who we are.”

Obama concluded her speech fighting back tears. She told the audience, “being first lady has been the greatest honor of my life, and I hope I’ve made you proud,” before walking off stage to applause. 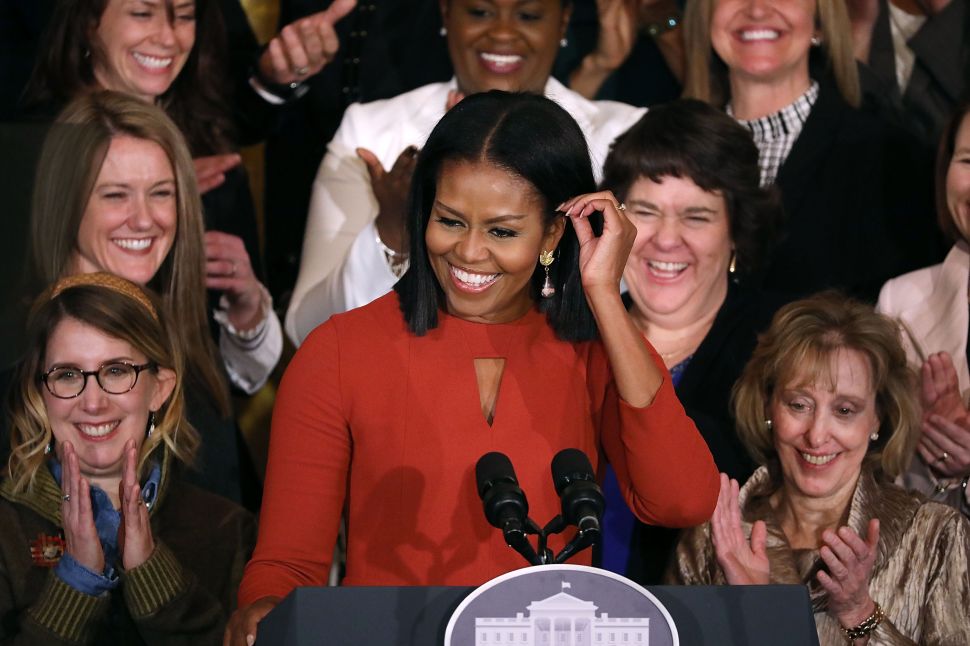