With Republicans now poised to appropriate funds for President-elect Donald Trump’s promised border wall, focus has shifted onto its cost and the matter of, as House Minority Leader Nancy Pelosi put it, “What is this [the money] coming out of?” Answering “Mexico” often evokes mockery, with Pelosi herself having scoffed, “Oh, yeah, really?” But, yes, really, Ms. Pelosi—it’s entirely possible.

This isn’t the opinion of a Trump sycophant, mind you, but of Jorge Castañeda, a New York University professor and former secretary of foreign affairs for Mexico who had characterized a Trump presidency as a “tragedy.”

Castañeda made his comments at the Hudson Institute in Washington last September. As the Weekly Standard’s Ethan Epstein reported at the time, “‘If [Trump] really wants Mexico to pay for the wall, he has many ways of getting many Mexicans to pay for the wall,’ Castañeda said…. He could ‘increase the fee for visas, which is a decision made by the State Department, not by Congress,’ Castañeda continued. He could ‘increase the toll on the bridges [between the two countries] … again, not done by Congress.’”

Lastly, reported Epstein, “Castañeda also suggested that Trump could tax remittances from the U.S. to Mexico: ‘There are ways of doing it,’ he said, ‘transaction fees, commissions, special fees etc.’ He labeled a recent resolution in the Mexican Senate to bar the use of Mexican federal funds for construction of the wall as ‘silly.’ ”

Whoever ultimately pays for it, “silly” could also characterize the agonizing over the wall’s cost. Note here that Pelosi’s profligate spenders never register such concerns when at issue is funding their leftist agenda. Had they, the federal budget might not be nigh on $4 trillion with trillion-dollar deficits for half of the Obama years. And viewed within such an outrageous budgetary context, the wall’s projected cost of $8 to 20 billion is about what Uncle Sam spends during a sneeze.

First, the wall is the domestic side, as it will protect our national domicile. With millions of aliens having transgressed our southern border over the last two decades, probability dictates that terrorists have assuredly been among them. Weapons of mass destruction might also have been brought across. Serious conventional weapons—such as those that played a role in the Fast and Furious scandal—have definitely made their way here. We continually hear news stories of hapless Americans who, because of illegal-alien criminals, get a very tragic 15 minutes of fame.

Pelosi’s concerns could also be dismissed by pointing out that, under the Constitution, education is a state matter. Regardless, her priorities are akin to a man saying he’ll spend tens of thousands on his children’s education but won’t pony up $200 to fix the lock on his front door. If your kids can’t sleep safely at night, they may not live to graduate.

Thankfully, we’ve perhaps graduated from puerile debates involving assertions that a wall is a radical notion and that ‘We can’t stop illegal migration.’ As author Leigh Newman noted, “Can’t lives on won’t street.” At issue here is not the way but the will. Securing borders is a basic government function; leaders claiming they can’t do it are confessing their unfitness to lead.

As for walls, barriers are generally the first step in security—everywhere. There’s the Great Wall of China, Hadrian’s Wall in England, and ancient and medieval cities were often surrounded by them. Today, 65 nations have erected border fences. Moreover, the Secret Service announced last year that they were going to build a taller, stronger security fence around the White House, and Obama is building a wall around his D.C. mansion. Apparently, he wouldn’t consider a trespasser an undocumented family member.

Of course, modern technology gives us a leg up. Our border wall can perhaps be fitted with motion and heat sensors, and be patrolled by drones, all tied in to a central computer. This is 2017 and, as Obama would say, “Yes, we can”—that is, if we just tear down one barrier: the barrier to sanity known as liberal obstructionism. Thankfully, a good part of that came down November 8.

Selwyn Duke (@SelwynDuke) is a traditionalist media personality whose work has been published widely online and in print, appearing at outlets such as The Hill, The American Conservative, WorldNetDaily and American Thinker. He has also contributed to college textbooks published by Gale – Cengage Learning, has appeared on television and is a frequent guest on radio. 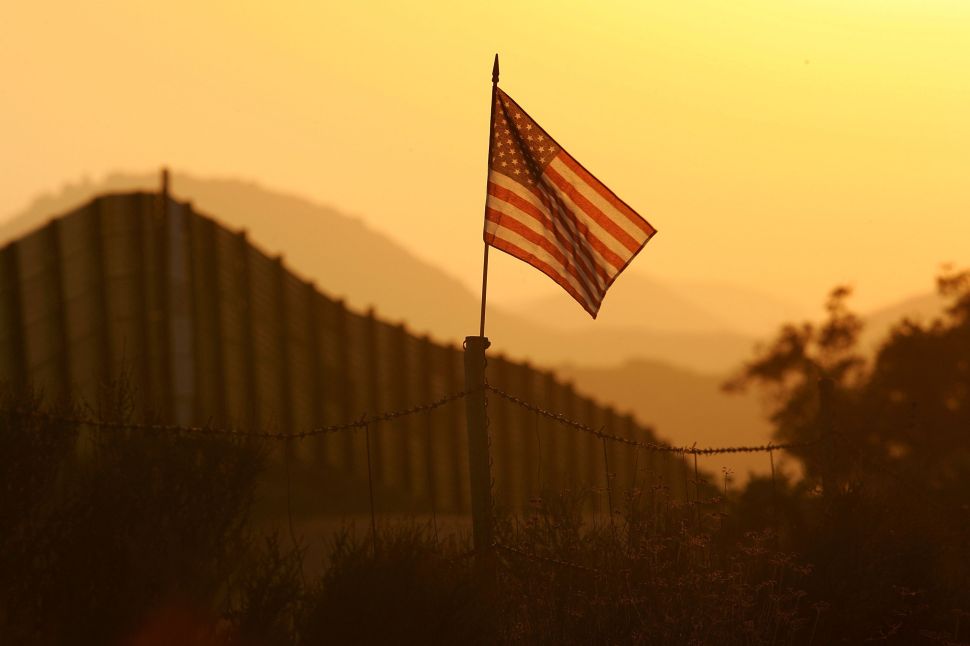