I used to work at the tabloids. I also worked at more esteemed publications (Chicago Tribune’s City News and the Chicago Sun-Times) but for the purposes of exposing the ludicrousness of BuzzFeed publishing the outrageous 35-page dossier on President-elect Donald Trump’s alleged trysts with Russian prostitutes involving golden showers, it’s my experience serving as an editor and reporter at Star, Us Weekly, In Touch Weekly and the National Enquirer that are most relevant. Because that dossier would never have seen the light of day at Star, National Enquirer or any of the other much-maligned tabloids. Here’s why:

There’s a myth that the tabloids put out outright lies. That’s not true. Of course, there are some dishonest journalists at the tabloids who make up stories and, yes, stories are sometimes exaggerated. However, this also happens at newspapers in the mainstream media. In 2003 it was revealed that New York Times reporter Jayson Blair invented quotes, wrote about scenery from published photographs and even stole material from other news organizations.

The best investigative reporters I’ve worked alongside were not working in the MSM. They worked at the tabloids. To get a salacious story in the tabloids about a high-profile politician or a celebrity, can take years of reporting and an army of journalists. Also, the lawyers at each tabloid carefully examine all of the reporting, evidence and the sourcing before the legal team approves the story.

For example, in 2012, I worked on a story where a prostitute alleged that one of her clients was a major politician. I worked on this story for about eight months. I interviewed her on the record and she went into detail about her history with this politician. (Ironically, those sexual details included golden showers.) This interview was videotaped. The prostitute also signed a legal document stating that everything she said was true. I collected a ton of evidence such as phone records to corroborate the story and confirmed details of her story with multiple sources. There were at least three other reporters who worked with me on this story. I went to the city where her alleged sexual interactions took place with this politician to confirm that he was there on the dates she claimed. There was a ton of work and thorough investigation that went into this piece and the lawyers said that they would approve the story after the prostitute did one final thing. They required her to take a polygraph test and pass. She agreed; however, when the scheduled day arrived to take the poly she went AWOL. The story, a certain blockbuster scoop, never saw the light of day.

So despite the bad rap that the tabloids receive, none of the tabloids I’ve worked for would have run the allegations about Trump based on the unverified evidence.

‘It appears the once high and mighty CNN’s journalistic standards and ethics have slipped to an all-time low as they turn to sensationalism over quality.’

Maxine Page, a 15-year tabloid veteran and former executive editor of Radar, who is not a Trump supporter, concurs.

“I can say with 99.9 percent certainty that there’s no way the tabloids would have run the Trump story based solely on unsubstantiated documents like those that BuzzFeed/CNN had,” Maxine told the Observer. “The tabs get slammed a lot for ‘bullshit stories’ and I’ll admit there’s definitely more than a healthy degree of spin that goes into the general run-of-the-mill celeb fodder—the fighting, dating, breaking-up, pregnancy speculation, weight loss, feuding kind of everyday fare that makes-up the bulk of the supermarket weeklies.

“But, if the tabs run anything that involves drugs, criminal activity, or extra-marital affairs, then, it’s going to have to be bang on the money—like, a dead cert.

“You’re looking at double, triple, sometimes even more, sourcing—each and every one backing up the story—signed statements, court documents, maybe on-the-record video interviews, photographic proof, and a whole ton of really solid, exhaustive reporting. Then, when an editor is fully convinced of the story’s validity, without even a shadow of doubt, the really hard work begins—getting it past legal.

“For obvious reasons, all the tabloid companies have an exhaustive legal process and a team of attorneys who work 24/7 assessing the potential legal risk of stories before they’re published— they want every i dotted and t crossed, and they want absolute, unquestionable certainty that sources are credible and valid, and reporting is rock solid, before they will even consider signing off on a huge, potentially highly litigious story. And if it involves a politician, or a billionaire? The next President of the United States? Well, then the legal ante is upped yet further.”

As Page describes, the tabloids never would’ve run the BuzzFeed story because their rigorous reporting and legal process never would have allowed it. BuzzFeed itself, in a ludicrous headline, described that what it was publishing was “unverified” and “contains errors.” Nevertheless, the site, which has spent a fortune luring brand-name journalists from traditional news organizations in hopes of being taken seriously as a purveyor of fact, still ran with the story.

As the report began to fall apart, competitor news sites hammered away at BuzzFeed’s decision to publish. Even CNN, which opened the door by referring to the report but not citing it or publishing, upbraided BuzzFeed, took its would-be peer to task, with Jake Tapper calling BuzzFeed “irresponsible” for publishing “uncorroborated” information. He sizzled them by concluding, “That’s not what we do. We are in the business of sussing out what is true and false.”

So far, the single most damaging allegation in the dossier is the charge that Trump representatives secretly met with Kremlin officials, presumably to cook up ways to influence the election. Specifically, the dossier stipulated that Trump’s lawyer Michael Cohen met with Kremlin officials in Prague of 2016. It’s since been reported that the Michael Cohen in the report isn’t the one who is Trump’s lawyer but a man from a different country with the same name. Trump’s Cohen went on Sean Hannity’s show and said, “They claimed that they have photos of me with some Russian government people. I said, ‘Produce the photos’ I’ve never been to Prague and I’ve never been to Russia.”

The level of investigative journalism a tabloid undergoes in reporting a “take down” of a high-profile politician was best illustrated when National Enquirer broke the John Edwards-Rielle Hunter affair and the subsequent lovechild stories.

“That [story] actually came from a call in to the tip line at the National Enquirer,” Page explained. “A very good friend of mine, who is actually one of the best reporters I have ever known, happened to answer the call, and by the time he had finished speaking to the anonymous caller, his gut instinct told him it was likely true… But, the tabs aren’t going to run a story from just an anonymous call-in to the tip line. And, don’t forget, this was John Edwards, who at the time, was a strong favorite to win the upcoming Presidency.

“The Enquirer actually had a team of over 12 reporters working full time and tirelessly on the story, and it cost them an absolute fortune in resources and man power. They had reporters and photographers staking out both Edwards and Hunter, following their every move day and night, for weeks.

“Evidence to back up the story was building by the day, and finally, bingo, one of the reporters followed Edwards to a hotel where he and Rielle were hooking up. Even then though, there had to be yet more reporting, tracking down and contacting friends, family, coworkers, neighbors, hotel staff—working them and working them until some would talk and give credible evidence to back up the story yet further.

“When the story finally broke, few, if any, of the major news outlets gave it any credibility, or even any notice, initially, because, well, National Enquirer. But, next came the Enquirer’s follow-up exclusive that Hunter was pregnant by Edwards, and then, there was no ignoring or denying it.”

Respected members of the media have criticized the recklessness of BuzzFeed’s actions. “Readers of this newspaper know well not to include me among Trump’s supporters,” John Podhoretz wrote in the New York Post. “But the scurrilousness of what BuzzFeed has done here is so beyond the bounds of what is even remotely acceptable it should compel even those most outraged by Trump’s political excesses to come to his defense and to the defense of a few other people mentioned in these papers whose names are also dragged through the mud.”

Rather than simply apologizing for the story—bad enough when it was merely unverified, but now being slowly debunked—BuzzFeed has instead been doubling down. BuzzFeed Editor Ben Smith (an Observer alumnus) said he was “proud” to publish the Trump memos.

“We thought that it was important, when you have a blanket claim like he was compromised by Russian intelligence, to share the details,” Smith told CNN on Sunday. “I think we are trying to best inform our audience, to be true to our audience, to treat our audience with respect.”

Page finds all of this very ironic considering that journalists at CNN used to bash the Enquirer for their reporting and questioned their journalism standards and ethics in the past.

One journalist who previously worked with Smith at a publication neither still works for speculated to the Observer about Smith’s motives in publishing so recklessly. Asked what would have motivated Smith, regarded as a generally sober journalist who cut his teeth on politics as a reporter at the Observer and then Politico, he said Smith was “reeling” from high-profile personnel defections and “needed a win.”

In early October, CNN hired away BuzzFeed’s top four political reporters in one fell swoop, including high profile scoop guy, Andrew Kaczynski. It was a crushing blow coming at the very peak of the political season, and occurred just a couple months after CNN chief Jeff Zucker brutally dismissed BuzzFeed (and Vice), saying, “I don’t think Vice and BuzzFeed are legitimate news organizations. They are native advertising shops. We crush both of them.”

“Ironically, I remember CNN  talking trash about the Enquirer [when the Edwards stories broke], slamming their ‘loose standards’ of reporting and ‘check book journalism,’” Page explains. “But that was way back in the 00’s, pre-Fox News’ total dominance in the market, and CNN was still viewed as a credible and real news outlet. Well, we all know what’s happened since then—and now, with an ever increasing desperation for ratings combined with the need to feed a relentless 24/7 news cycle, it appears the once high and mighty CNN’s journalistic standards and ethics have slipped to an all-time low as they turn to sensationalism over quality. And there sets the stage for stories that are unverified, speculative and unsubstantiated, being run as actual viable ‘news.’”

Trump has praised some tabloid publications—including National Enquirer—in the past for putting out solid reporting. He has said the Enquirer has a “very good record for being right.” As someone who worked there, I can back this up. In reality, the tabloids place a greater premium on accuracy and old-fashioned “make the call” reporting than many members of the mainstream media, including BuzzFeed and even CNN itself. 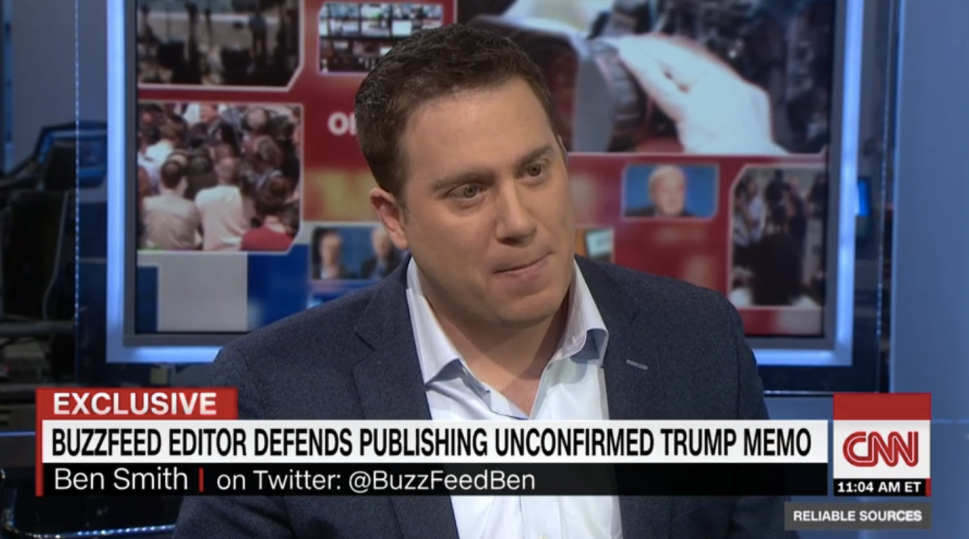