My grandfather once put down a relative he despised with this line: “My wife said you’re not fit to eat with pigs. But I stuck up for you. I said you are.”

My grandfather didn’t think the relative would be dumb enough to take him at face value. Unlike New York Times columnist Nicholas Kristof, who last week blithely slimed Trump voters in the course of purporting to “stick up for them” amid unfair treatment by the media.

Just who does Kristof think he is fooling with this kind of duplicity?

The veteran Timesman purports to stick up for Trump voters because, according to his argument, they’re not really venal; just ignorant and misunderstood. They got duped into supporting Trump because the media did insufficient vetting; journos didn’t work hard enough to explain his truly insidious nature and track record to less sophisticated folks. After all, he explains, this charlatan real estate magnate “was masterly at diverting us from substance.”

Now, look at the harrowing results!

“We will soon have as commander in chief the most evasive, ignorant and puerile national politician I’ve ever met, and while there are many factors behind his election, I think we in the media contributed by skimping on due diligence.”

Hello? Does anybody read Kristof’s column before he files?

Anybody vetting Kristof’s column—well, anybody not addled by ideological orthodoxies and hatreds—would have asked Kristof, “WTF? How can you say Trump is profoundly ‘evasive?’ Isn’t the whole criticism of him that he is unhinged and just blurts everything out irrespective of obvious consequences? Just which specific question from the press or anybody has he ever not answered?”

But, hey, it seems like very few people these days bother to ask anybody to read their stuff before filing. Even more damning is that Kristof’s supposedly forthright confession of media failings actually obscures and omits just how much rank bias, deceit, grotesque double standards, journalistic malpractice, and outright collusion with the Clinton campaign and DNC, his fellow fancy pants journos shamelessly employed during the campaign to defeat Trump.

For starters, it could be more accurately said that the media skimped on “due diligence” of many of Trump’s accusers—like Kristof’s paper not even telling readers where Jessica Leeds was employed when he supposedly sexually mauled her on an airplane business trip. Although the article—co-written by Michael Barbaro, who hung up when asked why that crucial detail for independent corroboration was omitted, as did political editor Carolyn Ryan—did include an old picture of Leeds, like the front-page story was her personal Facebook page.

And just what about Trump was not exhaustively scrutinized? In a major scoop, his private tax returns were printed in the New York Times itself. And how did all the scrutiny he received compare to the due diligence accorded his opponent, who, incidentally, along with her “national politician” husband, are actually far more renowned for being evasive than Trump, having even spawned an adjective that means “evasive”: Clintonesque.

Kristof didn’t raise that obvious question. But let’s look at some of the innumerable examples of grotesque double standards with how the media covered Trump versus the charmless shifty woman they assured everybody would win. Why don’t we start with David Duke compared to one little-noticed key alt-left leader in Hillary Clinton’s camp. Trump’s so-called relationship with David Duke was covered exhaustively by the media and even outright lied about by Washington Post reporter Janell Ross to depict him as a crypto-racist. But the usual suspects all ignored Hillary’s endorsement by the Communist Party USA chairman, even when video emerged of John Podesta running away from a reporter who asked, per Duke, if she wanted to renounce him.

Mistreatment of subordinates? Trump deriding his beauty contestant for porking out was covered extensively. “Miss Piggy” appeared all over the media.

But did a single reporter try to interview the bodyguards Hillary is notorious for mistreating? She is alleged even to have told one to “fuck off” when he said “Good Morning,” according to veteran investigative reporter Ron Kessler. That lovely exchange with a Secret Service agent dated to her First Lady days but a colorful New York Post story on Hillary treating her State Department security retinue so atrociously that they “privately snickered” when she broke her elbow also got no further mainstream press coverage, according to Google.

Spurious charges of anti-Semitism against Trump abounded. The “evidence,” offered by TalkingPointsMemo.com founder Josh Marhsall included an advertisement criticizing the Fed Reserve chair Janet Yelllin, who he noted is Jewish. Does that make anybody who ever criticized Republican Fed chair Alan Greenspan an anti-Semite?

Trump’s tweets were feverishly de-constructed by Washington Post columnist Dana Milbank for Jew baiting. But Milbank’s compatriot, Ben Terrris, shortly after commiserating about the insidious tweets, literally ran away from me and hopped into a cab when I tried to give him a 2000 article from the left-leaning Guardian about Hillary Clinton calling an underling “a fucking Jew bastard,” according to three eyewitnesses. (He later promised to call the guy but didn’t—more on that revealing encounter another time.)

Finances and financial entanglements? Everything about Trump’s businesses dating back to the early 1970s race discrimination lawsuit against him and his father when he was not even 30 was covered exhaustively. His penchant for getting good real estate tax breaks—something every similarly situated businessman in America aggressively seeks—was exhaustively reported by CNN like some kind of sinister and illegal plot. By way of many contrasts, Bill and Hillary’s Whitewater land deal was treated like an afterthought. Her shady dealings as a partner at Arkansas’ premiere corporate law firm also got short shrift.

This was the money shot for his pals.

“It didn’t help that the national media isn’t very diverse—not just in racial or ethnic terms, but also socioeconomically and geographically. We don’t have many national journalists with working-class or evangelical roots, so our coverage of Trump voters was often shallow or condescending, and we largely missed the fury and despair that Trump rode to victory.”

Is that supposed to be conciliatory and generous? Just like telling somebody, contrary to the misunderstandings, she is most certainly fit to eat with pigs? He’s basically apologizing for his media pals not grasping just how ignorant Trump voters really were. Suggesting that Trump voters were uniformly angry and desperate is actually incredibly shallow and condescending and contradicts some of the rare honest reporting like exhaustive stories by Washington Post reporter Jenna Johnson.

Some were angry and desperate. Some weren’t. Lots, of course, found Hillary unpalatable and would have voted for Bernie if he were the nominee. Trump’s message “Make America Great Again” could reasonably be construed by many as uplifting and optimistic and hopeful. Aspiring to greatness doesn’t mean you’re a desperate loser seeking grandeur—as the New York Times lead election story asserted, absent substantiation, about Trump voters when he captured the White House. Co-author Michael Barbaro immediately hung up when asked how he knew that’s why so many voted for Trump. Maybe Kristof can try to get an answer from him if he is serious about media accountability?

Kristof did not respond to a tweeted request for comment. I have a direct number for the suddenly publicity-shy journo so stay tuned. 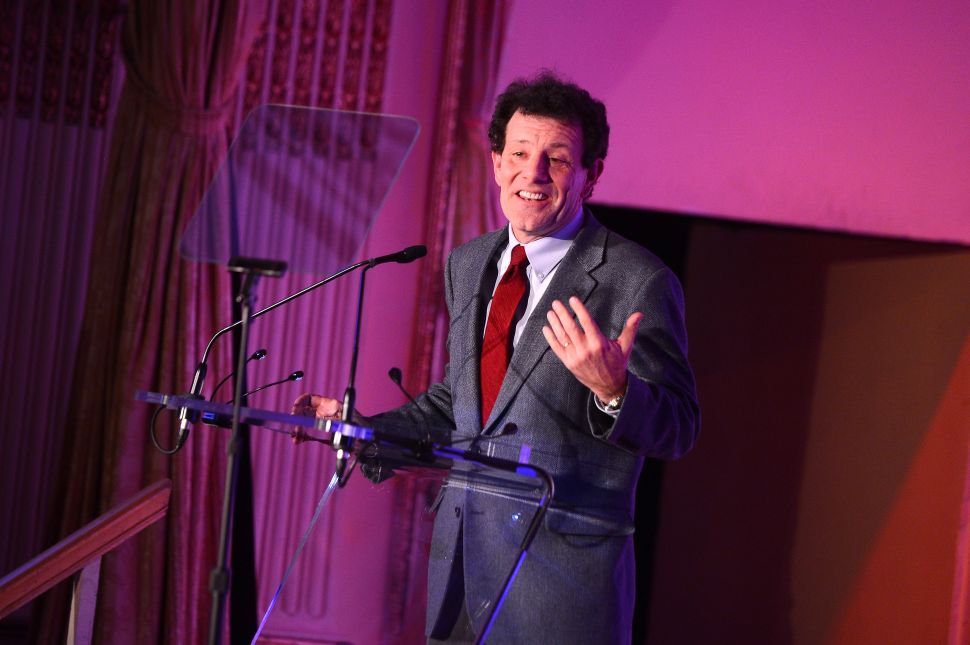