TRENTON – With New Jersey Governor Chris Christie’s State of the State address scheduled for later in the afternoon, five of the candidates jockeying to replace him gathered at the Wyndham Garden Hotel in Trenton on Tuesday to give their own accounts of the ills facing New Jersey and how those issues need to be addressed in coming years.

Murphy was the first of the hopefuls to take the stage. When he started his remarks, Murphy began by thanking Christie for reports that the governor’s address will focus heavily on drug addiction and recovery efforts. However, Murphy’s assessment of the current governor quickly devolved as the candidate focused on policies he feels the governor has fallen short on. Those policies include underfunding public employee pensions, creating a “stagnant economy,” a lack of investment in public schools and not focusing on environmental policies.

The second to take the stage—and the only Republican candidate to do so during Tuesday’s program—was Assemblyman Jack Ciattarelli. While Ciattarelli is a Republican legislator, the candidate said that, if elected, his term will not resemble Christie’s tenure.

“This is not the time for a Chris Christie third term. Maybe this is the time for an MBA/CPA, a main street small business owner,” said Ciattarelli, citing his own business accomplishments.

According to Ciattarelli, his tenure as governor, if elected, will focus on bridge building between Republicans and Democrats in the legislature, as well as an increased focus on working with New Jersey’s congressional delegation and state senators.

While Ciattarelli also criticized Christie, the Republican did say that there was no time in the state for a “liberal progressive agenda” due to economic issues in the Garden State.

Like Murphy, Wisniewski is fighting for New Jersey’s progressive voter base in the June Democratic primary. According to Wisniewski, New Jersey must eliminate the “transactional politics” he claims have been a hallmark of the Christie administration.

“The state of the state is not strong and that is because of the failed leadership of Chris Christie. Simply put, Governor Christie only cares about himself and taking care of his wealthy friends,” Wisniewski said. “After 21 years in the assembly, I have had a back row seat to the transactional politics.”

According to Wisniewski—the former NJ chair of the Bernie Sanders campaign—he is not afraid to push back against those who control New Jersey’s political culture. He also cited his time as the co-chair of the legislative panel investigating the Bridgegate scandal as proof of his willingness to take on the political machine.

Lesniak’s remarks primarily focused on his own record in the areas including environmental advocacy, animal rights and LGBT issues. He said his decision to run for governor stems from a desire to change the way New Jersey politics keeps “people out.”

“I have tried to restructure and reform government as a senator, it has gone nowhere,” said Lesniak, who also said he wants to make the state more affordable.

The last to take the stage was Brennan, an activist who is currently pushing for a special prosecutor to be appointed to investigate Christie’s role in Bridgegate. Initially, Brennan was not on the program but was given a few minutes for brief remarks at the close of the speaking program. During his time on the stage, Brennan discussed his plan to reform the public employee pension system and reform the Port Authority.

This year’s State of the State address marks Christie’s final while in office. His term ends in January 2018. A new governor will be elected to succeed him in November. 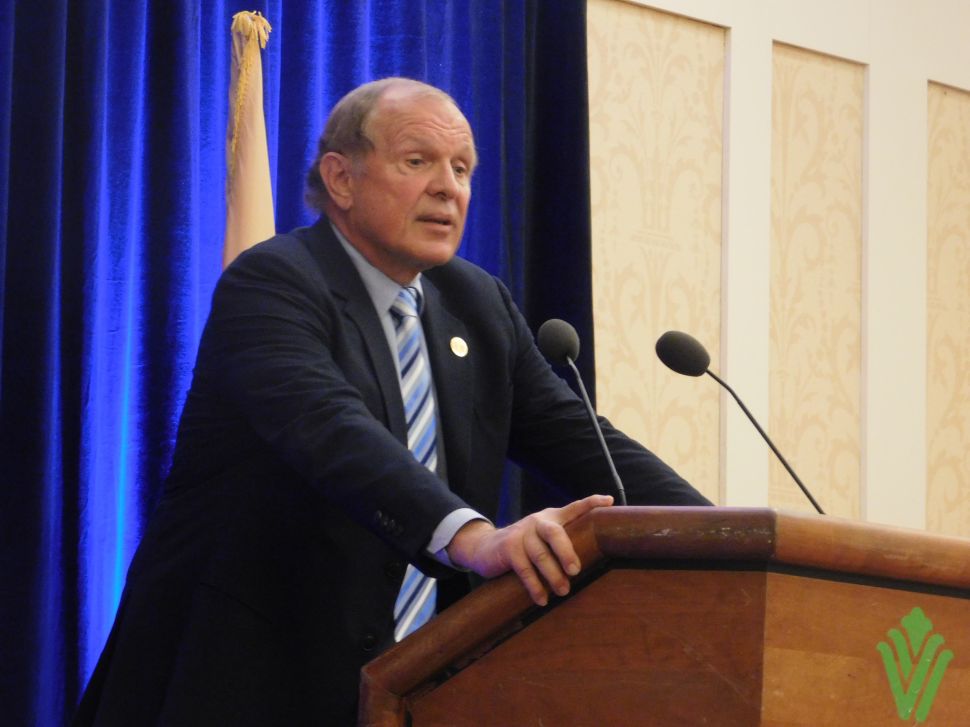