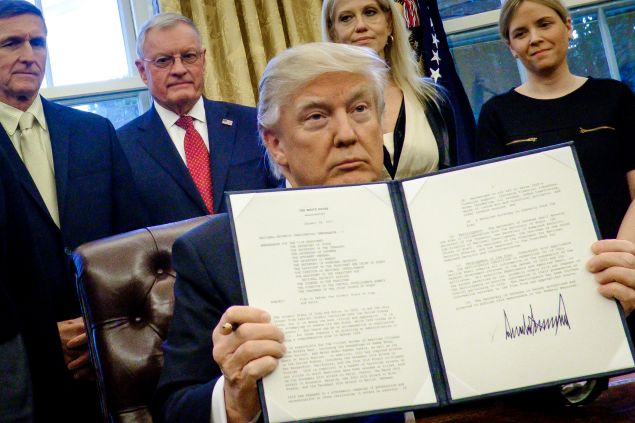 President Donald Trump holds up one of the executive actions that he signed in the Oval Office . Pete Marovich-Pool/Getty Images

Two Democrats vying for their party’s nomination in New Jersey’s gubernatorial contest weighed in against President Donald Trump’s executive order banning muslims from certain countries, including green card holders, from entering or reentering the U.S. Frontrunner Phil Murphy called on Republican governor Chris Christie to oppose the ban at the state level, while his progressive challenger John Wisniewski pledged that he would oppose for-profit detention.

Protests erupted at airports across the country over the weekend, and a federal judge issued a stay that wuold delay if not prevent deportations depending on the outcome of a lawsuit from the ACLU. As Murphy voiced his opposition, Wisniewski took the opportunity to take a jab at his background in the financial industry.

Murphy, a former U.S. Ambassador and retired Goldman Sachs executive, called the order “un-American and disgraceful.” He wants Christie to contradict Trump on the question of admitting Syrian refugees into the country.

“Governor Christie must direct his attorney general to take all legal means to protect refugees and green card holders currently in New Jersey who may be affected by this administration’s misguided policies,” Murphy said. “If he does not, history will show that he was silent as men, women, and children were sent back to the charnel house from which they risked everything to flee to a land of opportunity and freedom.”

Wisniewski, the General Assemblyman who initiated the legislative committee that investigated the Bridgegate scandal, pointed to a private detention center in Elizabeth underwritten in part by major Wall Street banks and said “private prisons should not be a source of profit.”

“It is outrageous that lawyers have to rush to airports across the country late on a Saturday night to defend people who thought they were simply coming home,” Wisniewski said. “The truth is Trump’s executive orders do not make us safer and are nothing more than a sloppy and ignorant attempt to enact a Muslim ban that is fundamentally anti-American. We cannot stop fighting to end this Muslim ban.”

The Elizabeth Detention Center is a for-profit prison owned by the Corrections Corporation of America and operated on behalf of the Department of Homeland Security. Wisniewski pledged to shut it down as governor.

Murphy took the lead in the Democratic primary last year when he secured the endorsements of key northern chairmen and beat out early favorites like State Senate President Steve Sweeney and Jersey City mayor Steve Fulop. State Senator Ray Lesniak is running against him along with Wisniewski. 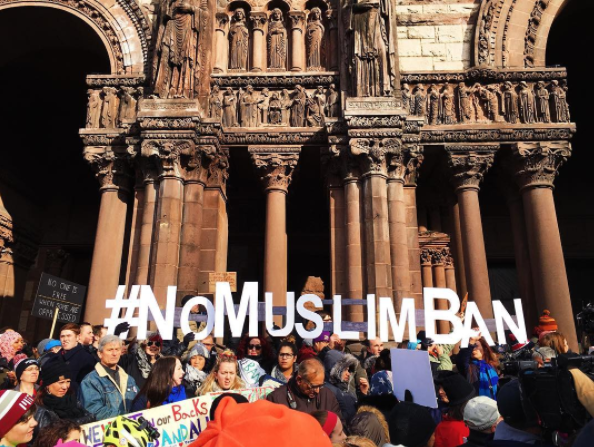