It’s the start of a new week in Trenton, a week that is expected to see Lt. Gov. Kim Guadagno officially launch her bid to replace Gov. Chris Christie and keep the GOP in control of the governor’s office.
It’s also the week that will see the inauguration of Donald Trump as our next president, and there were several stories published over the weekend about what that means for New Jersey’s roads, politics and the thousands of residents who currently receive insurance under the Affordable Care Act, which Trump has vowed to repeal.

Quote of the Day: “We know that one-third of our budget goes to the school fund, and you’re not ever going to affect property tax relief in this state, or lower property taxes, unless you at least address school funding,” Assembly Minority Leader Jon Bramnick.

Guadagno to Launch Campaign
Lt. Gov. Kim Guadagno will formally launch her campaign for governor Tuesday in Monmouth County, according to sources familiar with the planning.
Dustin Racioppi, The Record Read more

Will Trump era make Cory Booker a Democratic star?
There was a speech before a group of Democratic state legislators, an appearance on a Sunday talk show, and then a break with tradition by testifying against U.S. Attorney General-designate Jeff Sessions.
Jonathan D. Salant, NJ.com Read more

Blue state in a red Capitol: How will N.J. fare?
If New Jersey had a Facebook page, its relationship status with the White House during the eight years President Barack Obama was president would best be described as “complicated.”
Charles Stile, The Record Read more

Bridges, roads and rail all need funds for repair
President-elect Donald Trump has proposed large-scale investment in infrastructure to rebuild the nation’s roads and bridges and put thousands back to work. Will more money flow to New Jersey for transportation projects?
John E Seasly, The Record Read more

Hundreds rally in N.J. to oppose repeal of Obamacare
The prospect of Obamacare’s repeal by the Republican-controlled Congress and the incoming Trump Administration drew hundreds of people to rallies across the state on Sunday, where union leaders and Democratic elected officials and some who hoped to be vowed to fight to preserve the law that has provided coverage to hundreds of thousands of people in New Jersey.
Rebecca Everett and Steve Strunsky, NJ.com Read more

Obama, just before exiting, makes Jefferson boy’s day
A doctor once said Magiting “Kiko” Mina would not live longer than a year, but today he is an enthusiastic seventh-grader who bowls, plays the piano and cherishes a thank-you letter from President Obama.
Rob Jennings, NJ.com Read more

N.J. Congressman MacArthur votes no to repeal Obamacare
While U.S. House members on Friday overwhelmingly passed a vote to start in motion the repealing of the Affordable Care Act, Congressman Tom MacArthur was New Jersey’s lone Republican to say no.
Keldy Ortiz, The Record Read more

Is N.J.’s ‘weakling’ D.C. delegation bulking up in Trump era?
Can New Jersey soon be losing its status as a 98-pound weakling when it comes to wielding power in Washington?
NJ.com Read more

Meet the Republican businessman and actor you may not know is running for N.J. governor
Trivia question: Who was the first Republican candidate to jump into the 2017 New Jersey governor’s race?
Brent Johnson, NJ.com Read more

Christie leans left in N.J. but keeps door open on right
It was the week of two Chris Christies.
On Monday, the neo-liberal Chris Christie was back on the job, creating 20 new judgeships and signing off on their $9.3 million tab. He praised the state Judiciary that he once bashed as an unaccountable, elite enclave of liberal activism.
Charles Stile, The Record Read more

Christie’s crusade against heroin faces a rocky reality
Gov. Chris Christie outlined an ambitious agenda for battling addiction in New Jersey during his State of the State speech Tuesday, one that would unquestionably make an appreciable difference in the battle against opioids.
Stephen Stirling, NJ.com Read more

Churches win as judge rules for Morris County
The Morris County freeholder board’s practice of giving historic preservation grants to churches since 2003 has been upheld as constitutional by a Superior Court judge, who dismissed a lawsuit against the grants from the Wisconsin-based Freedom From Religion Foundation.
Peggy Wright, Daily Record Read more 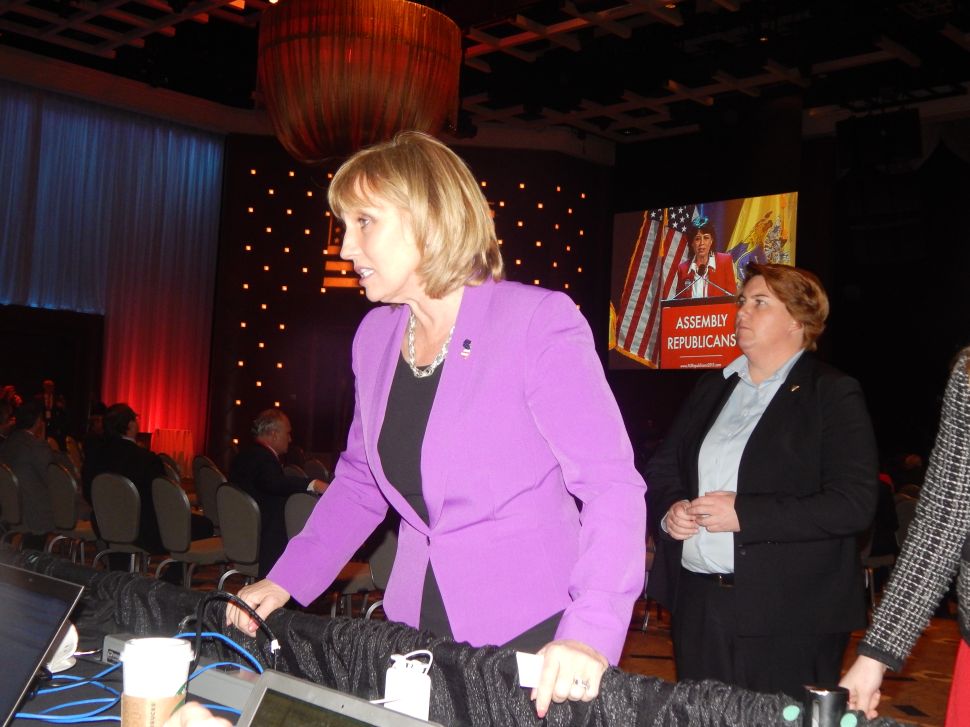