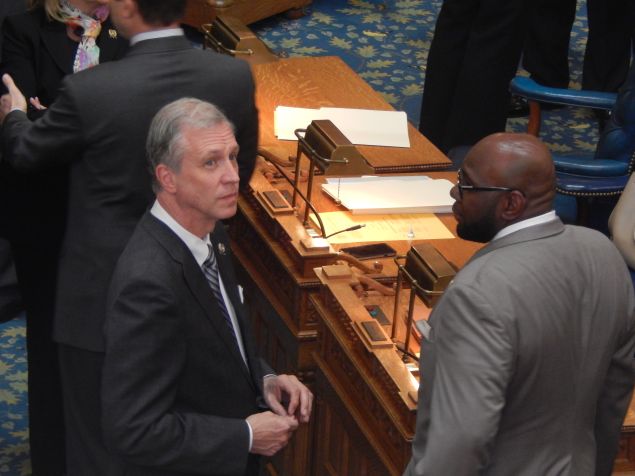 N.J. Assemblyman John Wisniewski is caught up in a war of words with his primary rival for the Democrats’ gubernatorial nomination. Max Pizarro for Observer

Following a provocation from the campaign of fellow Democrat and gubernatorial frontrunner Phil Murphy, New Jersey Assemblyman John Wisniewski is firing back on the question of $3.5 million in income his law practice drew from taxpayer-funded contracts with local governments and authorities in the last decade.

In response to the Murphy camp’s demand that he disclose the identities of clients he represented before state and local government entities, Wisniewski is blasting Murphy for his tenure at Goldman Sachs. The investment firm has become a talent pool for centrist Democrats in the state, and Murphy’s connections there helped him with the fundraising push that likely put him over the top for his party’s nomination.

“As Managing Director at Goldman Sachs, Phil Murphy made tens of millions of dollars working for the most secretive and controversial bank in the world,” Becker wrote. “And his fortune came on the backs of people’s misery, through home foreclosures, outsourced jobs and the fallout from the 2008 economic collapse – driven in part by the greed and criminal activity of Goldman Sachs.

“It has been 249 days since Phil Murphy launched his campaign to buy the Democratic nomination by showering party bosses with his Goldman Sachs fortune. Not once in that time frame has he come clean about his role in fleecing New Jersey taxpayers through bond deals, pension fees and extorting corporate welfare.”

Becker also criticized Murphy for the limits he put on reporters’ access to his tax records, which were made public only for those who went to view them in person on a certain day, saying “it has been 13 days since John Wisniewski took the unprecedented step of releasing 14 years worth of his personal taxes, a standard Phil Murphy has not met.”

Wisniewski, who has spent more than twenty years in the legislature and headed Bernie Sanders’ campaign in the state, is angling for the progressive vote in a race many have already called for Murphy. Senate President Steve Sweeney and Jersey City mayor Steve Fulop beat high-profile retreats last year when Murphy secured the endorsements of key northern county chairs.