Mayor Bill de Blasio said tonight he’s positive that the city will triumph in its battle against a lawsuit two Staten Island Republican legislators filed to stop the liberal administration from moving forward with plans to wipe the files of the city’s municipal identification program—believed to contain personal information of thousands of undocumented immigrants.

Last week, Staten Island Supreme Court Justice Philip Minardo started hearing arguments from both attorneys representing the city and those representing Assemblywoman Nicole Malliotakis and Assemblyman Ronald Castorina. The pair have sued to keep de Blasio from acting on a clause in the legislation that established the IDNYC program—designed to give a I.D. to people who do not have other forms of government paperwork—that allows the city expunge its records after the end of last year.

“We’re in court,” de Blasio told NY1’s Errol Louis in his weekly “Mondays with the Mayor” segment tonight. “I feel confident that the city law was very, very clear about not keeping that backup material and I think we’ll prevail in court.”

The mayor said that the city has duplicates of the cards in has issued so far, and that all of the basic information from every application is still kept on file. And he said that the NYPD is “thrilled” because more people have ID in the city, which he said is “very important in any encounter with a police officer.”

Last month, Malliotakis and Castorina filed a Freedom of Information Law request for all of the city’s documentation from the IDNYC program, and obtained an injunction last month from a Brooklyn appellate court on the grounds that government cannot destroy public records sought through FOIL. In response, the city announced it would no longer keep images of  documents submitted in applications for the credentials.

“That’s not a problem,” de Blasio continued. “It’s the backup material beyond that that will not be retained. We’ve now continued the IDNYC process by saying we’re not gonna keep that backup paperwork and the people have continued to come in wanting new cards. So I think that message has been received, that they’re safe and secure.”

In response to an Observer requests for comment, Ravi Batra—a Democratic attorney who has joined the two Republicans’ IDNYC litigation—referenced New York State Public Officer Law 84, which states that people have the right to know the process of governmental decision making. He asserted that “to review the documents and statistics leading to determinations is basic to our society.”

“The New York State regime for FOIL creates a rebuttal presumption of openness, transparency and disclosure to the public,” Batra said in an emailed statement to the Observer. “The city, despite being bound by the state law, created a local law that had the polar-opposite presumption: unless decided otherwise by HRA [Human Resources Administration], the documents must be destroyed. Clearly, this city regime violates state law.”

He added that the city accepts expired foreign documents like passports from other countries as proof of identity from applicants, even if those documents are unreadable.

Edward Mullins, president of the Sergeant Benevolent Association and longtime enemy of de Blasio, wrote a letter in support of Malliotakis and Castorina’s lawsuit on the grounds that dumping the IDNYC files could hamper future criminal investigations.

The city created IDNYC to allow non-citizens access to everyday conveniences, like opening a bank account or visiting a relative in the hospital. But it encouraged more people to apply to the program by convincing local cultural institutions to create perks for people who possessed a municipal I.D.

The mayor acknowledged that some groups have recently decided not to continue participating in the IDNYC program going forward, but said that those organizations have honored all of their biggest commitments. He said that the program currently has 40 participating cultural institutions, which he characterized as a stable number.

At the end of the day, he said, the city is reaching one million cardholders, who have become permanent members and have “loved what they experienced” with the program.

“A lot of cultural institutions are looking for new audiences, younger audiences, audiences of all different backgrounds and trying to become more of a less elite, less exclusive,” de Blasio said. “IDNYC has helped them and they’ve helped the city by participating in IDNYC.”

City Council members put a “memory hole” clause in the program to ensure that federal immigration officials could not seize the records in the event that a presidential candidate looking to implement mass deportations of undocumented immigrants were to win the presidential election.

De Blasio  said that he’s well aware of the concerns of various minorities in the city in the wake of President-elect Donald Trump’s victory, noting that bias crimes have gone up since the election, particularly anti-Muslim, anti-Semitic and anti-LGBT incidents. He noted that immigrant students and Muslim students are worried about discrimination or the possibility of a Muslim registry.

He said the city has made clear that it’s not going to let the hate speech of the national election “infect us” and that City Schools Chancellor Carmen Fariña has spoken deeply about it, encouraging principals and teachers to talk to their students.

“So I’m hoping the message is permeating and certainly for immigrant communities to know we’re not gonna allow our police officers to be turned into immigration enforcement agents and we’re gonna continue to do things like IDNYC that respect all immigrants regardless of documentation status,” de Blasio added.

The Council past a resolution late last year, after Trump’s election, vowing that New York would remain a protective “sanctuary city” for the undocumented—despite the Republican leader’s threats to sever federal funding streams to municipalities that do not fully cooperate with immigration authorities. In December, de Blasio signed onto a letter with other sanctuary city leaders urging President Barack Obama to take last-minute steps to shield foreign nationals from deportation under the incoming regime. 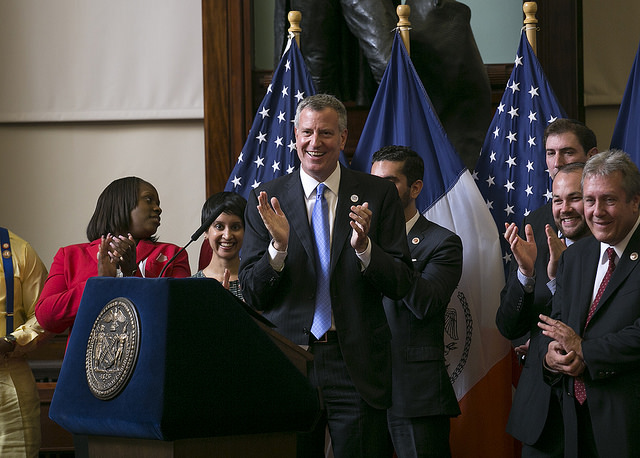