Mayor Bill de Blasio voiced “frustration” on the radio today over the slow pace of the Department of Justice’s inquiry into whether NYPD Officer Daniel Pantaleo violated the civil rights of Eric Garner, the black Staten Islander he choked to death during a routine stop in 2014.

Answering a listener’s call during his weekly “Ask the Mayor” segment on WNYC, the mayor said that a federal grand jury is still weighing evidence in the case, more than two years after a New York City grand jury decided not to indict Pantaleo. He alluded to news reports late last year that former U.S. Attorney General Loretta Lynch had replaced the lawyers and agents handling the case amid “disagreements.”

“Look, I think everyone’s frustrated. We’re supposed to have speedy justice in this country, and I don’t think it’s fair to anyone involved that this has played out so long. But I don’t have access to all the details,” he said. “I would have hoped things would have moved more quickly, but look, we stand ready to cooperate fully with the Justice Department in whatever they do.”

Activists have criticized de Blasio for not bringing internal charges against Pantaleo, who has continued to work and receive raises as a New York City police officer. The mayor maintained today that departmental deliberations could begin only once the Feds complete their work—which he warned could take several more months yet.

“Again, if they decide there is no further action on their part, then the NYPD will look at what it’s going to do,” de Blasio said.

It is unclear how the probe will proceed under President Donald Trump, and under his pick for U.S. Attorney General, Alabama Sen. Jeff Sessions. Civil rights leaders have lashed out at the selection of Sessions given his hard pro-police stance and his history of insensitive racial remarks.

The mayor’s handling of the killing and its aftermath angered advocates on all sides. Immediately following the incident, with its viral video recording of Garner gasping “I can’t breathe” with Pantaleo on his back,  he convened then-NYPD Commissioner Bill Bratton and the Rev. Al Sharpton at City Hall to discuss the matter with press.

Sharpton’s presence enraged police unions. De Blasio further infuriated the NYPD’s labor leaders after the grand jury decision, when he described warning his own half-black son Dante about the potential dangers of interacting with police.

The rising racial tensions culminated in the assassination of Officers Rafael Ramos and Wenjian Liu in Brooklyn by an outraged African-American gunman that December, in cops turning their backs on the mayor at the funerals of the fallen brethren and in a highly publicized temporary “slowdown” in police enforcement on low level offenses.

Yet de Blasio’s public defense of his police department at large, his decision to go to court to fight liberal efforts to obtain Pantaleo’s disciplinary record, his criticism of some Black Lives Matter rhetoric and actions and his unusual decision to use the phrases “all lives matter” and “blue lives matter” at a Garner remembrance have attracted attacks from the left. 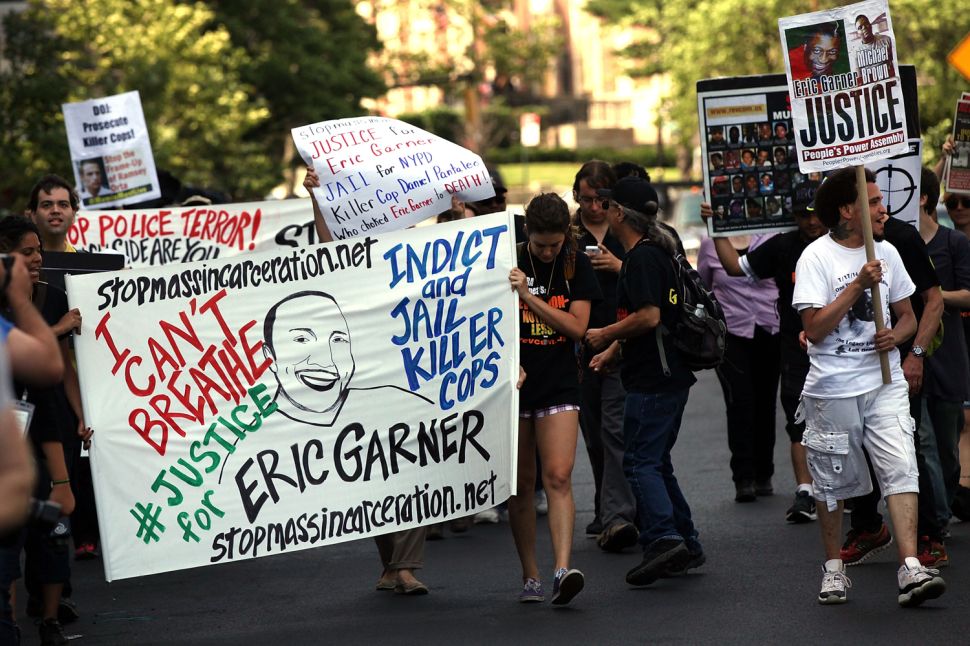