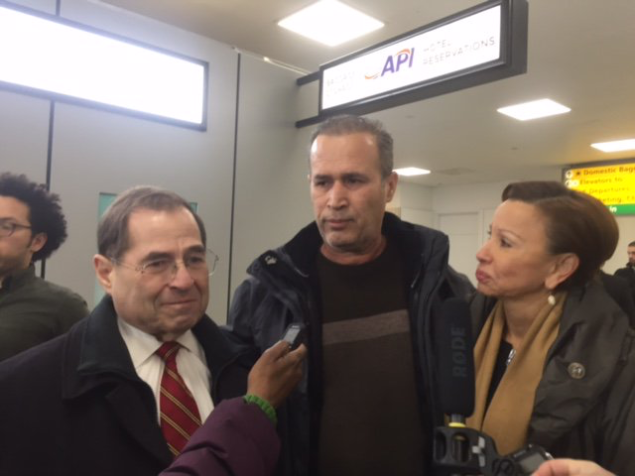 The two Democrats, who both represent parts of Manhattan and Brooklyn, announced that the Trump administration had allowed the former interpreter Hameed Khalid Darweesh to exit the terminal following hours of intense protest. Trump’s order, which temporarily bars entry from seven Middle Eastern and East African nations, applies even to people who have their paperwork in order and those caught in the air or visiting a foreign country when the action went into effect.

“Today, we saw in real human terms the damage and the absurdity of Trump’s policies. The president’s executive order is mean-spirited, ill-conceived and ill-advised,” Nadler and Velazquez said in a joint statement. “The order almost banned a man from entering the country who has worked for the United States government for 10 years, who risked his life to help us and to help our troops, and who loves our country.”

Demonstrations are set to continue well into the evening, with liberal groups like the Working Families Party and the American Federation of Teachers urging supporters to join them at the airfield at 6 pm. The showdown at JFK marks the first direct confrontation of Trump’s infant administration, and the first attempt at obstructing the new commander-in-chief’s implementation of his most controversial campaign promises via fiat.

Earlier this week, Trump signed dictates to sever funding for so-called “sanctuary cities” and to initiate construction of a barrier along the Mexican border. His response to the incident at JFK, in his native Queens, could illustrate the efficacy of protest in opposing his policies going forward.

“This should not happen in America. We shouldn’t have to demand the release of refugees one by one,” the Nadler-Velazquez statement continued. “We must fight this executive order in the streets, in the courts, anywhere, anytime. We must resist. We must fight. We must keep working to keep America the land of the free and the home of the brave.”

The Council on American Islamic Relations and the American Civil Liberties Union have both launched legal challenges to the executive action.

Nisha Agarwal, Mayor Bill de Blasio‘s commissioner of the Department of Immigrant Affairs, revealed on Twitter that her agency had sought to lend legal support to those detained at JFK—but Customs has thus far rebuffed them. 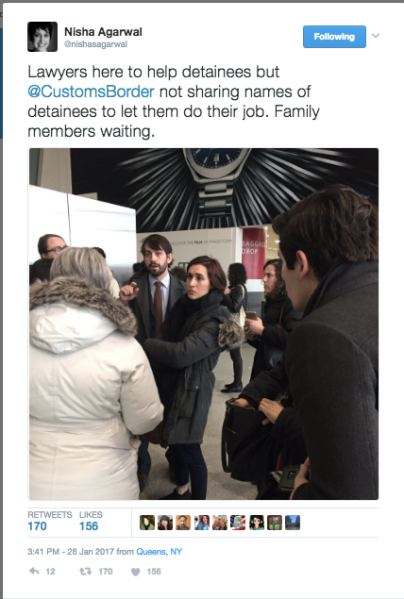 Gov. Andrew Cuomo announced he was also pledging executive resources to aiding the detainees. The Democratic governor, a rumored 2020 rival to Trump, alluded to the inscription on the Statue of Liberty.

“I never thought I’d see the day when refugees, who have fled war-torn countries in search of a better life, would be turned away at our doorstep. We are a nation of bridges, not walls, and a great many of us still believe in the words ‘give me your tired, your poor, your huddled masses,” he said in a statement. “This is not who we are, and not who we should be.”