What a marvelous idea it was to program the operetta Candide as the centerpiece of New York City Opera’s current season. Leonard Bernstein’s most inventive score for the theater, the participation of Broadway legend Hal Prince as director, plus the deeply emotional association of the piece with NYCO’s history from 1982 to the present—all this is surely a recipe for a triumph.

How sad, then, that the company bungled the project so badly, dishonoring the piece with mostly inadequate performances and a lazy, dated production. Instead of a noble artistic triumph, this Candide felt like a cynical attempt at marketing based on little more than the show’s brand name.

The satire, based on Voltaire’s comic novel, never been exactly an easy sell: the 1956 Broadway original production sank under the weight of its own ambition and, especially, Lillian Hellman’s overly earnest libretto. More successful was a radical adaptation of the work by director Prince in 1974, reducing the piece to a single act with a vulgar, smartass book by Hugh Wheeler. In 1982, at the behest of NYCO’s then general manager Beverly Sills, Prince expanded the show to two acts framed as a circus-like spectacle.

The biggest problem with the version done currently at NYCO (seen on its opening night last Friday) is that it still feels mired in 1982, like an old Saturday Night Live sketch. Wheeler’s humor is sophomoric and cynical, leaving the uplifting “Make Our Garden Grow” finale sound tacked on. The farcical plot, somersaulting between continents, leaves no room for character development or motivation for the musical numbers.

Prince’s production, in every important detail unchanged over the course of half a lifetime, felt under rehearsed and ragged, the antique gags fizzling because of poor timing. Leading man Gregg Edelman in the Voltaire/Pangloss central role stumbled over his spoken lines and gabbled his sung patter unintelligibly. The charm-free Jay Armstrong Johnson as Candide sang out of tune all night and Meghan Picerno floundered in the coloratura of Cunegunde’s “Glitter and Be Gay.”

In a gaggle of cameos, Broadway veteran Chip Zien pushed a little hard but won most of the evening’s scant laughs. Opposite him, though, Brooks Ashmanskas played all his characters on a single note of shrieking nance minstrelsy that Paul Lynde might have found offensive.

The only truly satisfying performance came from the durable stage and television star Linda Lavin as the world-weary old lady. Even her whooping attempts to scale the mezzo-soprano tessitura of “I Am So Easily Assimilated” felt organic: the character is, after all, quite elderly and at best an amateur vocalist. But Lavin’s great strength was her sense of continuity: she played the whole show as an arc, not a series of vaudeville turns.

Usually the tear-jerking moment of this show is the soaring “Garden” chorale finale, though in this case conductor Charles Prince’s noisy take on the piece left me dry-eyed. That hardly mattered, though, because just moments before, Lavin had broken my heart with a tiny moment in reaction to Candide’s epiphany “For Man, it is only work that makes life endurable.” Lavin’s lips curled in a wry smile and she nodded her head, as if to say, “I’ve known that for a long time, but it’s good to hear it confirmed.”

The actress, who will turn 80 later this year, has been toiling in the theater for six decades now, so she knows intimately the joys of hard work. Ironically, it took the oldest performer in the company of Candide to make this apparently stale work feel eternally young. 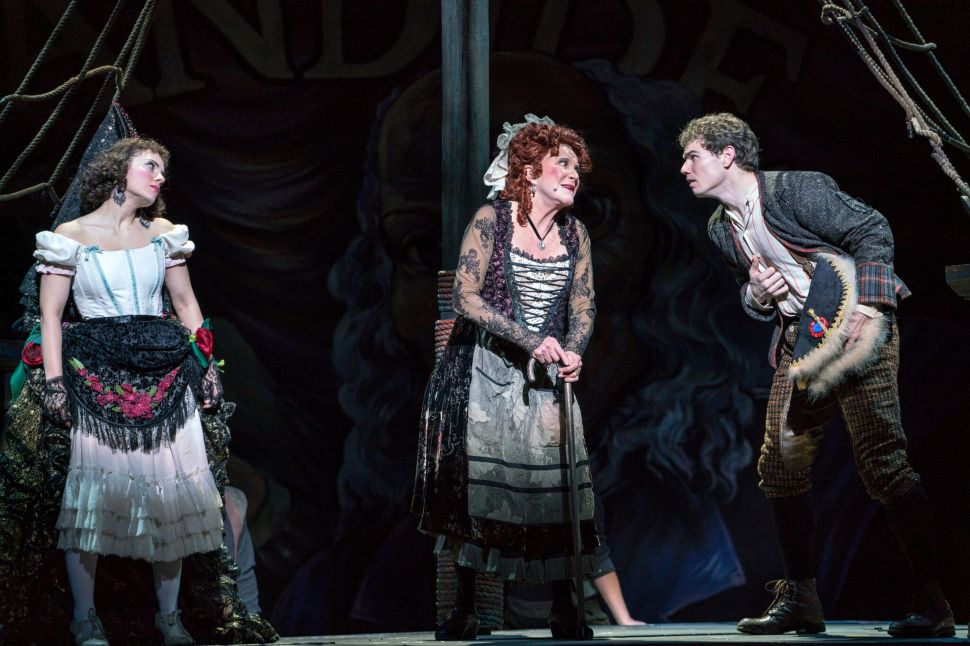