We’ve already delivered all of the looks from the 2017 Golden Globes red carpet, but now it’s time to break down the collection of gowns that graced the tapis rouge.

From the biggest colors of the night to the top prints, here are the major trends from the award show.

Clearly the “no white after Labor Day” rule does not apply at the Golden Globes. There were a lot of pristine white gowns on the carpet, but the graphic iterations were the most memorable.

Sienna Miller showed off her chiseled abs in a Michael Kors cutout gown, which featured a casual cap-sleeve. Sarah Jessica Parker went with cutouts in Vera Wang Collection, although she had a very strong princess vibe, with a full skirt and a bizarre hair halo. We adored Thandie Newton‘s nod to Monse, in a sequin-dusted frock from the young brand and it’s clear that Kristen Wiig nailed it, in a see-through Reem Acra gown.

Black and white was a smaller trend, as Janelle Monáe donned an oversized polka dot pouf of a dress from Armani Privé. Louis Vuitton outfitted Game of Thrones‘ Sophie Turner in a two-tone architectural look which was modern, but unfortunately rather ill-fitting on her small frame.

A more elevated take on the nude dress was first spotted as a trend at the Palm Springs Film Festival gala and it continued on for the Globes. Nicole Kidman must have really enjoyed the Dior look she wore last week, so much that she nearly replicated it with this silver Alexander McQueen frock. This ethereal design could have done without the awkward sleeve pouf, but the intricate waves of sequins made up for that.

Chrissy Teigen, on the other hand, made a case for bringing back the peplum with her Marchesa dress, which was a successful example of mixed metals. She wasn’t the only one to mix silver and gold; Naomie Harris‘ Armani Prive dress did the same, all on a stunning sweetheart neckline. Emma Stone hit two trends with her Valentino Haute Couture gown, as it was both pink and silver. It was a rather safe choice for the La La Land actress, who usually veers on the riskier sartorial side, but it did allow her art deco Tiffany & Co. necklace shine.

If it was a column gown and it was covered in blossoms, it was a good pick for the Golden Globes. Laura Dern and Jessica Chastain opted for gowns that were nearly identical in silhouette, though the similarities ended there. The former’s Burberry number was smothered in flowers on a cream background, while the latter’s periwinkle Prada was merely dusted with blooms.

Even Busy Phillips‘ gown was a similar shape as the other two, but with a few add-ons. She had long sleeves, a train and flowers that were strategically placed, plus an on-trend clutch that brings us to the next category…

Sure, yellow isn’t the easiest or most flattering color. But for some reason, celebs return to it year after year for award shows, kind of like a moth to flame.

Though we’re not the biggest fan of the hue, it was well-executed at the Globes. Reese Witherspoon‘s Atelier Versace gown was a beautiful butter yellow hue, while Natalie Portman‘s Prada was an appropriate nod to Jackie Onassis. It helps that she was nominated for playing the former first lady, in Jackie. And Viola Davis collected her Globe for Supporting Actress in this one-shouldered Michael Kors number, which shimmered nicely onstage.

If you thought Tumblr pink was something that we would be leaving behind in 2016, it looks like you were wrong. Rogue One‘s Felicity Jones proved that point, in a Gucci gown that was easily identifiable by its sequin troupe l’oeil detail. Also in Gucci was Zoe Saldana in a two-tiered ruffle gown with a bow, which tied her up in three different hues of pink.

We’re also rather partial to the dramatic Christian Siriano gown that Angela Bassett donned; it garnered that description thanks to its color and swooping shoulder detail. And finally, for what might be the most regal look of the evening, Lily Collins went for both volume and sparkle in this Zuhair Murad number. It was a bit over-the-top, but her choice was certainly age appropriate for this young starlet. 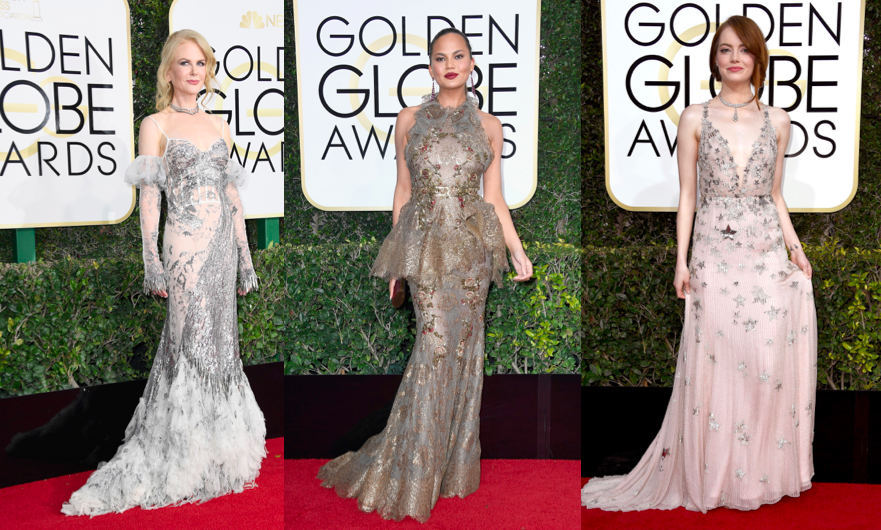