When the United States Army Corps of Engineers announced on December 4, 2016, that it would not grant the easement that would allow construction of the Dakota Access Pipeline to cross under Lake Oahe in North Dakota—threatening the drinking supply for the Standing Rock Sioux reservation— protectors were wary that the victory was only temporary. Though an environmental impact assessment was ordered to explore alternate routes, the company constructing the pipeline vowed to continue pursuing completion of the project.

Despite the positive news, several protectors have stayed at the Standing Rock camps to preserve the infrastructure and continue the movement to protect the Standing Rock Sioux’s supply and tribal rights for when the pipeline construction resumes.

On January 16, police allegedly resumed firing rubber bullets at protectors praying peacefully at the barrier along the pipeline construction site. A new National Guard site has allegedly been set up within the vicinity of the camp in preparation for escalating action between protectors and police after President Obama leaves office. A missile system was reportedly sighted in the hills behind the barriers that is apparently intended to take down any drones attempting to acquire aerial footage of the pipeline construction site.

The violence has resumed in the wake of several proposed North Dakota bills aimed at protesters. A bill sponsored by Republican State Rep. Keith Kempenich suggests protecting drivers from any legal consequences if they inadvertently hit, injure, or kill pedestrians who are obstructing traffic. The bill appears to be attempting to intimidate any future protesters in the state, rather than serving as meaningful legislation, as no drivers reportedly hit any protectors staging protests in Bismarck or near the protector camps.

On January 9, Kempenich sponsored a separate bill that would require the North Dakota attorney general to take legal action against the U.S. Army Corps of Engineers and the Department of Justice. Kempenich’s biggest donor to his latest election campaign in 2014 was from the ND Oil PAC.

“It’s shocking to see legislation that allows for people to literally be killed for exercising their right to protest in a public space,” said Tara Houska, national campaigns director for Honor the Earth, a nonprofit organization focused on raising awareness and financial support for indigenous environmental justice. “These [bills] are meant to criminalize the protests with no real concern for constitutional law.”

The Morton County Sheriff’s Department restarted their propaganda campaign against the Standing Rock protectors shortly after North Dakota State Legislators filed several bills aimed toward the latter. Additionally, in late November the department it overtly lied about the injury sustained by 21-year-old Sophia Wilansky, who was hit in the arm by a concussion grenade fired by police. In desperation, they briefly took down their Facebook page and removed several controversial posts after Thanksgiving, but they continued embarrassing themselves when they restored the page. Their response to thousands of veterans—including Rep. Tulsi Gabbard—visiting Standing Rock in solidarity with the protectors was to increase their bizarre claims. During one press conference leading up to the veterans’ arrival, a department spokesperson claimed that protectors planned to trigger the veterans’ PTSD by providing them with weapons—a disgraceful and inaccurate suggestion based on a complete lack of understanding of PTSD.

On January 14, The Bismarck Tribune published an interview with Cass County Sheriff Paul Laney. (They have been sharing the work of policing the protests with the Morton County Sheriff’s Department.) “It’s like it became the mecca for every eco-terrorist, I call them, every eco-person out there,” Laney told the newspaper. “It was like 140 years of perceived Native American oppression came together there.” Laney is implying that Native American oppression is just a perception and likening “every eco-person out there” to a terrorist, while making an Islamophobic comparison to Mecca. Already in the first sentence of Laney’s interview, he has managed to demonstrate prejudice toward Native Americans, Muslims, and everyone who cares about the environment. Based on how the Morton County Sheriff’s Department portrays themselves to the rest of the world, it is no surprise there were issues of violence and misinformation regarding the Standing Rock protests, and there will likely be several more if this department remains in charge of keeping the peace. 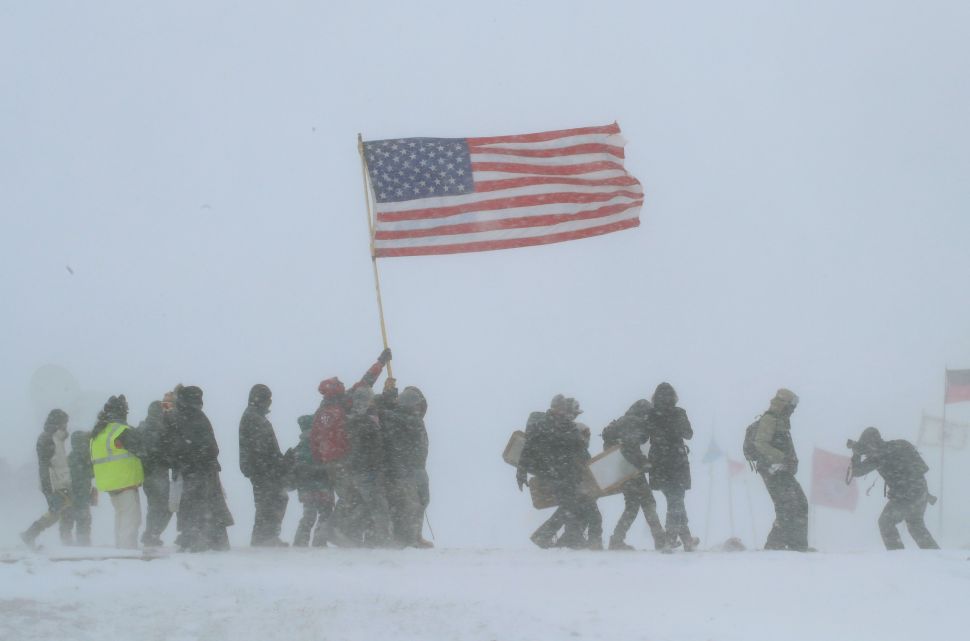