Pop Psych: Where we ask a real psychotherapist to delve into the mindsets of our favorite pop culture characters. This week: Trauma and rebirth across generations in Fences.

About halfway through Fences, Cory Maxson (Jovan Adepo) asks his father, Troy Maxson (Denzel Washington), “how come you ain’t never liked me?” Given the chance to either buoy his son’s ego or tear it down completely, Troy instead dodges the question. Presidentially, he appears to answer it, but all he really accomplishes is a cloud of obfuscation. Troy tells Cory all the reasons why he doesn’t have to like him, as well as all the ways in which his authoritarian paternalism is better than affirmation, but he never addresses the heart of the matter: whether or not he likes his son, and why.

When the exchange goes down, we don’t know much about Troy’s childhood, but by the end of the movie he’s told a bit of his story. To hear him tell it, Troy was born the son of a viciously unhappy sharecropper who was so brutal that when his wife finally got the chance to leave she did so without taking any of her kids with her. A man so ruled by his passions that when he caught his own son fooling around with his first girlfriend he beat him for it, and then tried to rape the girl. A man so cruel that Troy was willing to walk 200 aimless miles just to have a prayer of escaping his influence.

But while this personally recounted tale paints nothing but a grim picture of Troy’s childhood, the recollections that live in familial memory do soften the edges a bit. We know also that Troy’s dad had a creative spark, and that under the right circumstances he could express emotions like love and sorrow. We know this from a song passed down from Troy’s father to Troy to Troy’s children, about a dog, Blue, and how much Troy’s dad cared for him and will miss him now that he’s dead. It’s not much, but it may be all the family has to feel good about their heritage, and its presence in all their minds is proof enough of its importance in their line.

Try as we might to forget where we came from, children find nourishment wherever they can, and adults remember it despite themselves.

When Troy tells his story to his friend and his first son, Bono (Stephen Henderson) and Lyons (Russell Hornsby), it’s obvious they’ve never heard it. This is a clear indicator that Troy would prefer not to spend time in this memory, that he would prefer not to have any history at all if it has to be this one. And yet, the song persists, curling into the family tapestry at the edges of recollection. Try as we might to forget where we came from, children find nourishment wherever they can, and adults remember it despite themselves.

All of this is to say that Troy is a complicated survivor of a plainly vile childhood. Now, many people want to believe that a person’s issues are their own, but that’s simply not true – as we can see from the passed-down song about Blue, families are systems that persist across generations. Trauma can be inherited, literally on the genetic level but also emotionally and behaviorally. What we grow up with shapes us for the rest of our lives, teaching us what it means to be a parent for better and for worse.

In Troy’s case, we may be able to deduce why he was unable to answer Cory’s question based on his own history. Troy’s a charismatic guy, and he likes a lot of people – his wife, his friends, his brother – but we can tell from his blustering response to his son that he doesn’t answer because he can’t. He doesn’t know how to cognize the notion of liking a son, because growing up his father was his adversary. Troy’s father taught him that children are impediments to a man’s own accomplishments, and so his conscious mind thinks that his role as a dad is to teach his son to survive in a manner that doesn’t get in the way of his own thriving.

He doesn’t know how to cognize the notion of liking a son, because growing up his father was his adversary.

For Troy, the victory is that he willfully provides food and shelter, whereas with his own father dinner was prepared for the man alone, and the children were left to fight over the scraps. Certainly, everyone is entitled to their own opinion on child rearing, but this does seem like one of the classic blunders. At the end of Plato’s Republic, Socrates describes the least virtuous life as that of a king who eats his own children. As we learn from Troy passing on his father’s song, children are the greatest vector for a person’s influence in this world. The relationship proves to be symbiotic, not parasitic; a thriving child is a thriving parent.

And the upside of being human is this: our instincts know that even when our minds don’t. Sure, instincts can be tamped down by social training – look at Troy’s father for an example of what the cruelty of this world can do to a man – but they do remain. Troy is unable to speak his feelings for Cory, but that doesn’t mean they don’t exist. Without one mote of doubt, we can say that the job he did raising his son is on a whole new level of quality than the one he received from his own father. And though he cannot answer Cory’s question constructively, he doesn’t stoop as low as he could, either. The question, remember, is why Troy does not like Cory, but in not answering Troy manages not to confirm the suspicion.

In this moment of intensity, the two of them metamorphose together. Cory is a young man bucking against the rules of his house and, as such, engages classically with his father, daring the man to give him a reason to leave. But Troy does not do so. It’s a game of brinksmanship that so many fathers and sons play, where Cory asks his dad to give him a reason to be a man. But Troy, perhaps unconsciously, truly loves his son and refuses to do so. Troy knows his son is still too soft to walk alone in such a hateful world because that’s exactly what he did and all he got from it was a lifetime’s worth of self-loathing and fear. So he serves himself by chiding his son, while simultaneously serving Cory by keeping him in the home.

By the end of the movie, we see the results of Troy’s efforts with Cory: he’s a young man now and, like his father, not afraid of hard work and dedication. But he has dropped his father’s entitlement, his rage at a world which had no grand place for him. Like his dad, he’s a fighter, but unlike his dad he has found a meaningful outlet for his strength. And, like his father, he still doesn’t know how to relate to his family. He’s still trying to figure that out, but he has time. And if it takes generations, then generations will accomplish it. 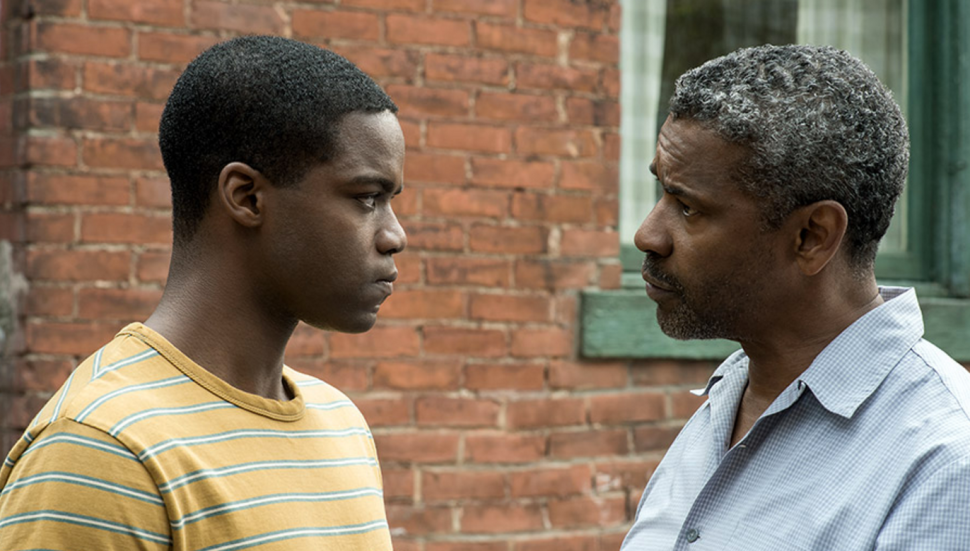