Pop Psych: Where we ask a real psychotherapist to delve into the mindsets of our favorite pop culture characters. This week: Netflix’s Sense8, and pulling your head above the during trauma.

While it is, of course, true that every person is unique and that their battles are their own, when you spend enough time listening to people in the midst of struggle you start to notice trends. These often come up in the words people use to describe their internal experience – all of our feelings are unique to ourselves, but the effort at communicating them is hindered by a finite language. In my own practice as a therapist, one of the most common trends to come up with clients is the attempt at describing what it’s like to be trapped – by circumstance, by money, by obligation, etc. – by invoking the feeling of drowning.

Now, this is an interesting jump from adjective to verb that speaks to a certain inescapable reality of life: there’s no such thing as stillness. To be trapped is a fantasy, as the nature of time demands that no experience is static. The experience of having no options, stuck as it may seem, is actually quite mobile. As your life moves inexorably toward its conclusion, you either become more entangled or less. You swim, or you drown. This is a lesson that Sense8’s recent Christmas special understands well.

The experience of having no options, stuck as it may seem, is actually quite mobile.

As the double-length episode opens, we see a scene of the Sensates swimming and playing off the back of Kala’s (Tina Desai) boat. The scene moves from serene to hopeful to sad in just a few short moments as we watch Kala and Wolfgang (Max Riemelt) frolic tentatively underneath the sea, before parting company and being joined by the rest of their enclave. It’s an interesting way to frame the situation: though Kala made her choice to marry in the first season with good reasons, she is slowly coming to the realization that reason has never been in control of desire. Though she struggles to get above the ocean of her feelings, she remains beneath the waves.

As Kala’s story continues, we see her make every effort to move forward in affirmation of her choices. She tries to force herself to want to be with her husband Rajan (Purab Kohli). She tries to ignore her connection to Max. But in the end, she is unable to change who she is and ends up becoming only more entangled in her emotions for Max, while simultaneously hurting Rajan and, as a result, feeling indebted to him. She’s trying to swim her ocean of emotion, but by ignoring her own internal compass she only ends up swimming deeper under the .

Meanwhile, Nomi (Jamie Clayton) and Amanita (Freema Agyeman) make their own efforts at escaping a more literal trap. Hunted by the FBI, the two of them hide out, and eventually go on the run, in an effort to remain free. Hounded by special agents, it makes all the sense in the world for the two of them to split up. Nomi would lose her last connection to the mundane world, and Amanita would no longer be in danger of being arrested for crimes she had nothing to do with. And yet they choose to keep each other, even if it means going on the run.

In essence, they trade some of the freedoms they thought they relied on – the freedom to work, to have a community of their choosing, to order Chinese takeout – in order to be able to focus on the freedom they both need: the freedom to love each other. It’s the emotional equivalent of a caught fox chewing off its own leg to escape a hunter’s snare. Certainly it hurts, you can see their anxiety as they enter Bug’s (Michael X. Sommers) house, but in the end, it’s worth it. This is the weight they have to cut if they’re ever going to surface.

…there is no way to make no choice, and standing still is as much a way forward as moving deliberately.

This trend continues across each character: Lito (Miguel Ángel Silvestre) has to choose between honesty and his career, Sun (Doona Bae) has to choose between pride and privilege, Capheus (Toby Onwumere) between obligation and dreams, and Riley and Will between clarity and death. They’re all trapped beneath the waves, and their only options are sink or swim. And, as we learn from Kala’s sequence, losing touch with one’s self means getting lost under the , but not hopelessly: when your own compass fails you, allow the people you love to pull you up.

The reality of time is terrifying indeed, and many of us try to forestall its realization by throwing a little temper tantrum against the world. We try to hold steady, to remain comfortably within our traps. But that’s not an option we have: there is no way to make no choice, and standing still is as much a way forward as moving deliberately. The makers of Sense8 know this, know the futility of thinking you’re stuck, know the eternal hope of wriggling free. Most importantly, they know the cost of a good life is letting go of the bad one. 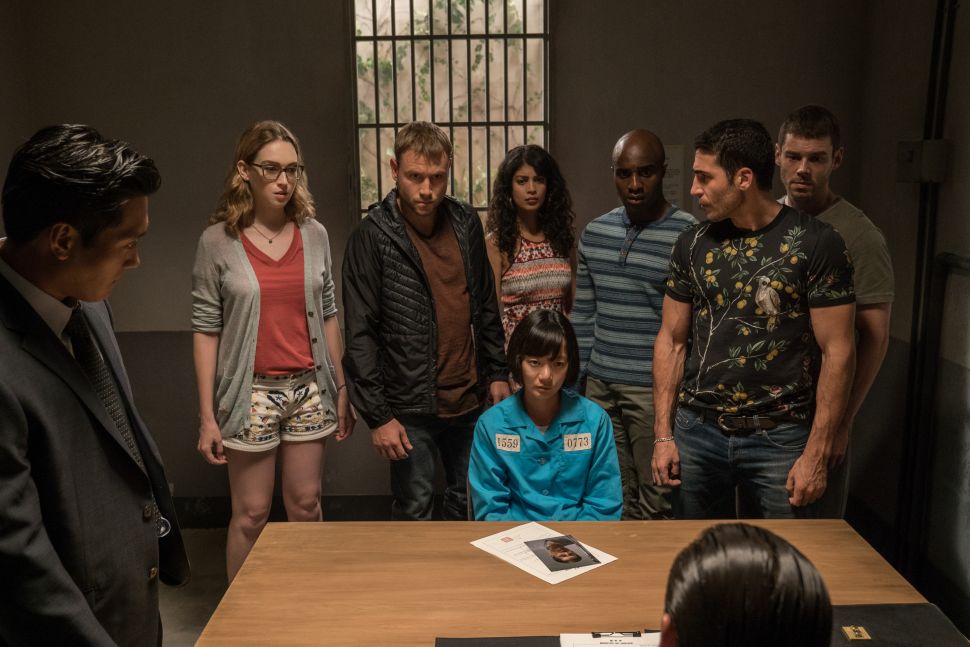