The most chilling moment in the gotcha-fest Resident Evil: The Final Chapter occurs when fit fighting machine Alice (Milla Jovovich) muscles past a rotting U. S. Capitol to perch on the lip of the reflecting pool facing a Jenga-like Washington Monument. She could be the last female left behind at the Women’s March on Washington. And, except for Alice’s manicured brows and satiny foundation, this aftermath does not look pretty.

I refuse to take you back through the previous five Resident Evil films, the “oeuvre” built on the ruins of what was already a muscular video game franchise. This alleged final installment shoves Alice back down the rabbit hole to where it all began: the Hive in Raccoon City. Sub in any generic movie dystopia. She is seeking an airborne antidote for the hideous T-virus that has transformed most of the world’s population into zombies—and, yes, every time she tries to get out she gets reeled back in. Game of Thrones‘ Iain Glen (always a treat!) returns as the villain, Dr. Isaacs, a Big Pharma murderous megalomaniac intent on purging the world’s human hard drive for a reboot that will favor an oligarchy of his choosing. Mwahahaha.

Let’s pause for a moment to praise the concept, if not the particular example, of the female-driven franchise. Jovovich — often working with her partner-turned-spouse Writer-Director Paul W. S. Anderson – has ascended to become the actress to play the same lead in the most major films. With six evils tucked under her belt, Jovovich surpasses Underworld‘s Kate Beckinsale, who has only made five to date, and the Alien franchise’s Sigourney Weaver. In Hollywood terms, Jovovich is money – the sci-fi action franchise has grossed close to a $1B worldwide since it began in 2002. Amen.

I have a soft spot for Jovovich – a protégé of cradle-robber Luc Besson who cast her as the red-wigged LeeLoo opposite Bruce Willis in the endlessly watchable The Fifth Element. In Resident Evil Yadda Yadda, she’s simple and muscular while looking handsome in dirt splatters and a bloody cut across her chiseled cheekbone. She’s striking in black athletic gear and combat boots – not everyone can carry that look off. Think Elle Fanning or Greta Gerwig or even Isabelle Huppert. No, Jovovich is solid, minimalist, and irony-free. She speaks in action, letting her biceps and quads work it. It would be too dismissive to say she’s the Jean Claude Van Damme of sci-fi action horror but it’s not exactly a stretch.

Jovovich binds the episodic action sequences, her face a mask of noble pain and isolation. She outruns zombies, orchestrates catapults of flaming gasoline, literally slays a dragon with a Hummer – and all without a single unnecessary quip or wasted kiss. Whew! No far-fetched romantic B-plot here. There isn’t a man on the set who could be a match for her – except, perhaps, Director Anderson behind the camera who enshrines his wife in a dark and murky forgiving light.

Resident Evil: The Final Chapter (or maybe not so final depending on the grosses) is the kind of blockbuster that can be watched on an airplane. It can even be viewed on the screen of the guy across the aisle and a row ahead without much loss of plot or context. It’s international in that the carnage needs no language – there are words but whether in English or Russian or Chinese, who cares? But what does matter is that Jovovich has found her niche as the Brunhilde of movies, the shield maiden, the strong and vigilant Valkyrie who doesn’t need a man to save the world until the next apocalypse. 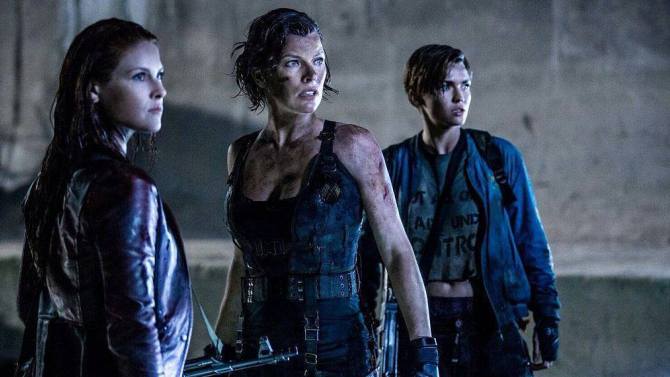