Yesterday’s presidential inauguration (and the accompanying protests, including today’s Women’s March on Washington) featured many moments made for social media, from Batman references to clever protest signs.

But no single event allowed the internet to vent its anger more than this video of white nationalist Richard Spencer getting punched in the face during the inaugural activities:

Spencer, who coined the term “alt-right” and stated that “America belongs to white men,” gave the internet a creative outlet for its outrage. This weekend Twitter was flooded with videos adding background music to Spencer’s blow. Here are some of the best creations:

Bruce Springsteen, “Born in the USA”

this is as patriotic as I've felt in a long time pic.twitter.com/yiVxd8semM

Phil Collins, “In the Air Tonight”

Montell Jordan, “This Is How We Do It”

This Is How We Do It feat. DJ Richard Spencer. pic.twitter.com/y4qxmOg7Dq

“Guns and Ships” from Hamilton

Celine Dion, “My Heart Will Go On”

Viral Video of Richard Spencer Getting Punched — "My Heart Will Go On" Remix#CelineAScene pic.twitter.com/0e3GtIV1Hg

Thin Lizzy, “The Boys Are Back in Town”‘

Spread the word around. pic.twitter.com/pacj1K7Xl3

anybody done this yet? pic.twitter.com/9Ath6xFuxf

I made a remix of Richard Spencer getting punched in the face and set it to Disney's Frozen pic.twitter.com/5qip0RgnmC

I present a "Fight Song," as it were. pic.twitter.com/fuL3fFIOqV

Spencer (whose Twitter avatar features Pepe the frog) tweeted earlier today that he will be filing a police report in Washington, D.C. about the incident. 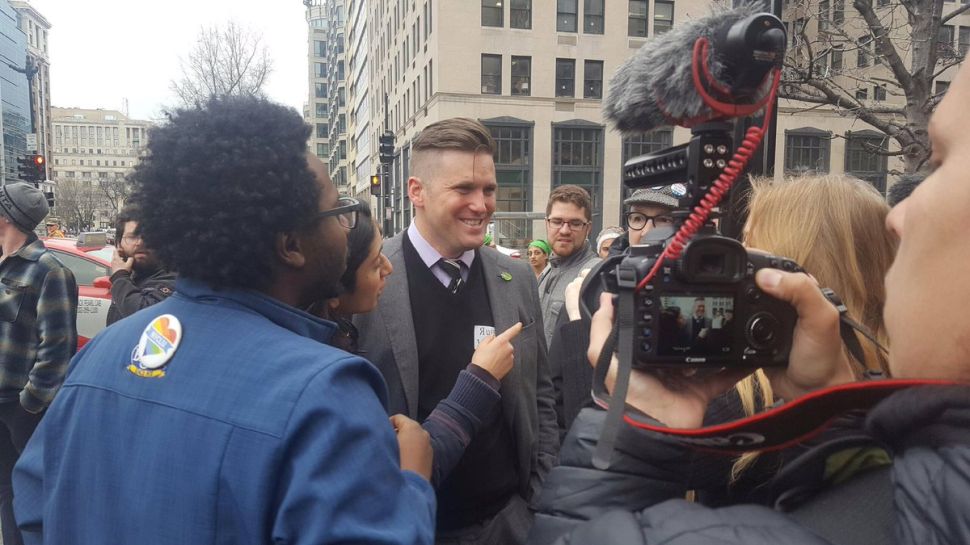