(DISCLAIMER: In keeping with the great CW tradition of teenagers being portrayed by twenty-something adult models, this review is chock full of references to some of the CW’s most seminal work.)

You remember Archie Comics, right? …Sure, you do. Since 1939 the homespun teenage ginger has been caught between Betty, the blonde next door, and Veronica, the upscale brunette, in what is in many ways America’s defining love triangle. Archie and his merry gang of wholesome friends have done everything from hunt zombies to take a bullet for senators in Very Special miniseries. Archie, Betty, Veronica, burger-starved Jughead, frenemy Reggie, and more recently, happy-go-lucky Kevin Keller have seen and done it all. As far as Americana goes, the town of Riverdale is home to teenage royalty. So, leave it up to the CW to give them a sexy, angsty 2017 makeover that places them somewhere between Veronica Mars and Twin Peaks….. In hindsight, it’s almost weird that this didn’t happen sooner.

This latest TV take on Archie & co introduces us to an atmospheric Riverdale filled with death, secret, and muuurder. And did I mention? These kids fuck now.

The season mystery centers around twin classmates, Jason and Cheryl Blossom, one of whom (Jason) disappeared during a morning boat ride the summer prior to the opening school year. Calling it now: these two creepy soft-lighted siblings were totally Lannister-ing in the middle of that lake. Riverdale knows where its bread is buttered and this season-long mystery is of secondary concern to the pilot episode, which is more concerned with introducing its updated cast.

Girl-next-door Betty is now an Adderall-ed overachiever whose mother’s parental expectations have already driven one daughter to psychiatric incarceration. Veronica Hodges is now a Gossip Girl escapee, arriving into town as a rich Queen bee looking to reinvent herself as something other than a queen bee–while still queen bee-ing pretty hard. Jughead spends his time in an atmospheric diner ruminating over his strained friendship with Archie. Josie and the Pussycats are needlessly intense for a high school band wearing cat ears while Kevin Keller is a gay sidekick that repeatedly–almost problematically–introduces himself as the gay sidekick. True enough, that was mostly his role in the comics, (“Archie Comics introduces a gay character”) but like, can you calm down? It’s just weird for anyone to introduce themselves by their sexual orientation at every turn unless you’re The Todd from Scrubs. Bro needs a richer inner life is all I’m saying. Although, Moose the dim-witted footballer being a closet case makes a lot of retroactive sense.

To its credit, one episode in, Riverdale mostly works and, God help me, I’m already team Veronica.

An early problem of Riverdale is that all of the show’s interesting elements center around the personality vacuum that is this version of Archie Andrews. I have no qualms with the fact that every other line of dialogue draws attention to either his Crayola-dyed hair or his set of Abercrombie-on-Ephedrine abs, conveniently obtained just before the start of the series… I just don’t get this version of Archie yet.  He wants to join the football team, but not really?  His father is stifling his artistic self, but not really? He’s torn between Betty and Veronica but not really? (Since his introductory love interest is someone else entirely and Betty is so deep in the friend-zone, he all but sneers in disdain when she tells him she has feelings for him. Twice.)

While Betty and Veronica feel like darker, more nuanced versions of their comic selves, Archie reads like one of the broadly sketched characters from those later seasons of Glee once all the good characters had moved to New York; too much and not enough all at once. When Luke Perry is your sensitive contractor dad, you don’t have any problems.

The most interesting thing about Archie here might be his blackmailing of Miss Grundy, reinvented as sexy music teacher Geraldine (whose age gap with her students is magnificently portrayed by a pair of glasses). Archie coerces her into sexy private music lessons with the knowledge that the two of them overheard a gunshot while necking by the lake the day Jason Blossom died. Riverdale is apparently a town where many people wake up really early in the summer to go have moist sex by or on large bodies of scenic waters.

Many elements of Riverdale’s writing still have a clunky pilot feel that will hopefully be streamlined as the show comes into its own. It’s nowhere as cleverly written as, say, Veronica Mars and considering that this is the network that gave us Gossip Girl, Cheryl Blossom feels like a D-list mean girl that the janitorial staff could probably dethrone if they put their mind to it. And it doesn’t matter how much of a lampshade is hung on it, Betty and Veronica making out in order to add some sizzle to cheerleader tryouts feels like the early 90’s crashing into the early 00’s.

But between the bags of dollar bills, bullet-holed foreheads, and two stellar performances by both Betty and Veronica, there are enough pieces for Riverdale to pass the midtown replacement test — even if the pilot perhaps killed the wrong ginger boy.

How long will Veronica play the good girl before she gives into her Blair Waldorf tendencies and becomes the monster we deserve? Will Betty snap? (The girl clenches her fists so hard that she draws blood, y’all.)  Will the show become a hit and manage to get Kyle Chandler to portray Veronica’s terrible father? Is this Riverdale’s version of Sabrina the Teenage Witch, a goth-dressed Wicca? I will be tuning in next week to find out, which was far from a given before this pilot. 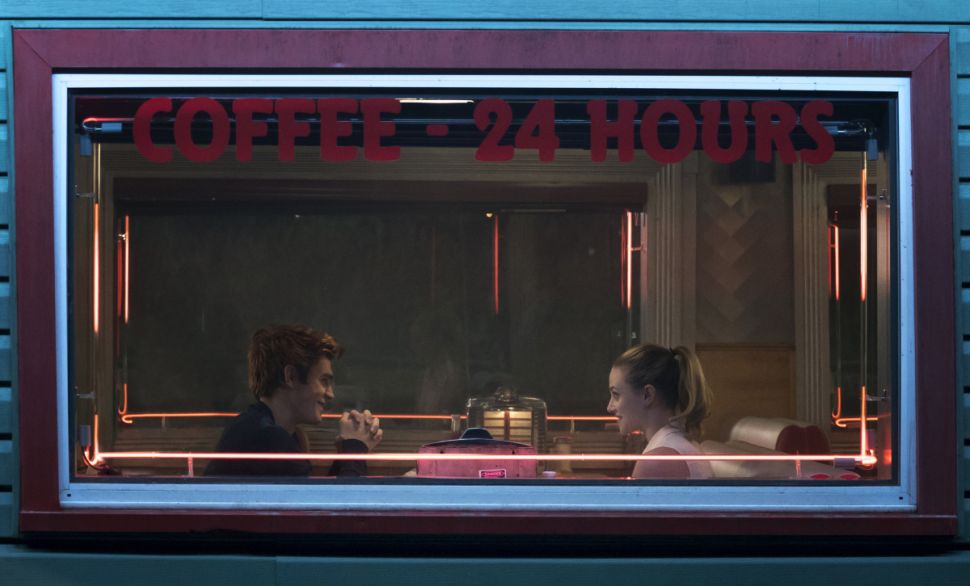