Sitting in front of a whiteboard filled with scribbles from a recent brainstorming session at Ellevest, a digital investing platform marketed to women, the startup’s CEO and co-founder Sallie Krawcheck (a former journalism major) pronounces the multicolored musings off-the-record. But she makes an exception for one number among the scrawled sayings and bullet points: 150. That’s how many years, Krawcheck explains in a Southern drawl that evokes gumbo and porch swings, it will take women to gain salary parity with men. But the former Sanford Bernstein, Smith Barney and Bank of America executive, who will speak at the 92nd Street Y on January 17th about her new book Own It: The Power of Women at Work (Crown Business), is assiduously working to shorten that grossly unfair timeline.

You dedicate your book to your grandmother, who “tore down a lot of walls.” Tell me about her. Esther Bielsky came through Ellis Island in 1908 in a blinding snowstorm from Poland and settled in Charleston, South Carolina. She had my father at the age of 41, which was scandalous. She worked every day of her life at our family’s women’s clothing store. She was a real trailblazer.

What do you remember about her? Chanel No. 5 and her standing at the counter selling. I just thought she was amazing.

Some businesswomen colleagues confide to me they have succeeded not because of other women but despite them. Have you found that true? Yes and no. For those of us of a certain age, we can point to “This one helped me, and this one didn’t.” For me, having worked on Wall Street, by the age of 26 I was a senior woman. I did have one woman manager, who promised to help me—“I’ve got your back, this place is difficult”—but the advice she gave me never felt right. And sure enough on the day I was let go, she was on the other side of the table. Here’s what I think drove that. If you are a senior woman in business, you intuitively know two things: If a white man promotes a woman or a person of color, he gets credit for it. If a woman says great things about a woman, you get dinged for it. Research is clear on this. “Hey Suzy, she’s the best. Well, of course you say that, because y’all like having facials together.” The second thing you know if there’s one seat at table for a woman and you don’t want to give up your position—why would you help another woman move ahead? When you know those two pieces on information, you have to go against the grain to promote other women. I think that’s why the queen bee existed. And that’s changing.

Can you point to a woman who gave you a leg up? I had a peer, Lisa Shalett, at Stanford Bernstein. Lisa and I went to Merrill Lynch together, and she’s now at Morgan Stanley. What I had was a more a comrade-in-arms. We would say to each other, “Is this fucked up? This is fucked up.” I’m seeing her for lunch in a few weeks.

What did the recent presidential election, in which a less qualified man beat a more qualified woman, tell you about the state of misogyny in America? We need to be careful about boiling the election down to that one issue. You and I both know people who voted for Trump despite the apparent misogyny—not because of the apparent misogyny. That being said, it was interesting to watch her being told to smile more while discussing national security, being called shrill and the intense hatred some people have of her. What’s really been interesting to me is when I first published on LinkedIn a handful of years ago, the response to every good or pedestrian thing I wrote would be “Outstanding article, Sallie” or constructive criticism. Now I will write about the gender pay gap and hear back, “You women are just complaining way too much,” and they’re off to the races. People are being loud in their misogyny. When I write about the gender pay gap, I now add, “Quick note, if we close the gender pay gap, it’s not just good for the women: It’s good for their families, it’s good for the economy, it’s good for society, and, gentlemen, if you have women customers, it could be good for you, because they’ll have more money.” Some part of the population on a professional site feel empowered to sling vitriol.

‘When industries go through crisis, they tend to be less diverse on the other side. Executives say we can’t afford diversity right now instead of maybe diversity will help us.’

What common mistakes do women make in job interviews? This question makes me itch. I can answer this question for the way business exists today. And I will it answer it with the common advice women are given: Women need to negotiate more, need to ask for more money, need to be more assertive, then need to, they need to they need to…need to act like a man, right?

The problem with that advice is that as a woman it’s really exhausting having to spend your life acting like a man. Can’t we let women act like women?

Please elaborate. Women bring some great qualities to work. We bring risk-awareness. We bring a greater focus on relationships. We bring more holistic decision-making than gentlemen do. We bring a more long-term perspective than gentlemen do. We tend to look for meaning and purpose in our jobs to a greater degree than gentlemen do. There’s a reason why when you have more women in management roles than companies have a more long-term perspective than when it’s just men. The best way to quash all those positive things that come from diversity is to put in place review systems and quantification of performance that over-weights confidence, decisive decision-making, etcetera. Corporations say, “Okay, women or people of color, now act like guys.” I saw it on Wall Street. Women there would take on more risk and swagger more than the men, negating the positive impact of having women.

At the Texas Conference for Women, you stated that Wall Street “went into the downturn white, male and middle aged, we’ve come out whiter, maler and middle-aged-er.” Given that the incoming administration touted plans to attack regulation, what’s your forecast for diversity on Wall Street? Can it get worse? It got worse because Wall Street went through a crisis. And while you and I may think, the people who caused the crisis would not end up in power on the other side, that’s not what happened. When industries go through crisis, they tend to be less diverse on the other side. Executives say we can’t afford diversity right now instead of maybe diversity will help us.

I know this about myself. If I’m under a lot of pressure, and there is a woman who is Southern and bottle blonde with a financial services background, a research analyst by training and our parents know each other, I can trust her, because what I’m doing is projecting myself on her. So I can imagine how she’ll solve a problem, whereas if there was a person of color, with different sexual orientation and different gender and who grew up in a different country, I don’t know what to do with that. Theoretically, he and I, having very different experiences, can form a better team but in reality it’s hard for one to imagine.

Give me a fact about women and money that would shock a male CEO. Here’s one about my industry: I ran Merrill Lynch, I ran Smith Barney, the attrition rate of their clients is much lower than you think it is. People stick. Men leave their financial advisors at a rate of two to five percent a year, in the year after his death, his widow leaves that same financial advisor at 80 percent. That’s a huge opportunity.

You talk a lot about business ethics, advising people to listen their guts—literally. You’ve said, ‘When I can’t eat, something’s wrong.” Relate the most painful time when your company upset your stomach. There have been a couple times. When I found out my ex-husband was having an affair with my now ex-friend, and I went down to 108 pounds. The second time was during the financial crisis at Smith Barney, when I was fired for returning client funds, I went to 108 pounds on that one.

I’m taking a new job next week. Give me a few tips to successfully “on-ramp.” Listen, listen, listen. I tried to give myself six weeks or to make any decisions about people, about strategy. If you are going to fire this person or hire that person, do it all in a concentrated period. The Band-Aid gets ripped off and everybody goes back to work.

Research shows that we’re more comfortable networking with our own gender. What are practical ways women and men can mix more? Conferences. It’s got to be the right one and it’s got to be for a real reason.

How should we deal with sexual attraction that gets in the way of cross-gender networking? You hear from women that is such a barrier. Their boss will take one of their male colleagues out for dinner or drinks and they get left out of that because of this fear that people will view it as sexual. Guys, get over it; You’re not that attractive. I assure you, we’re not walking around lusting after y’all! 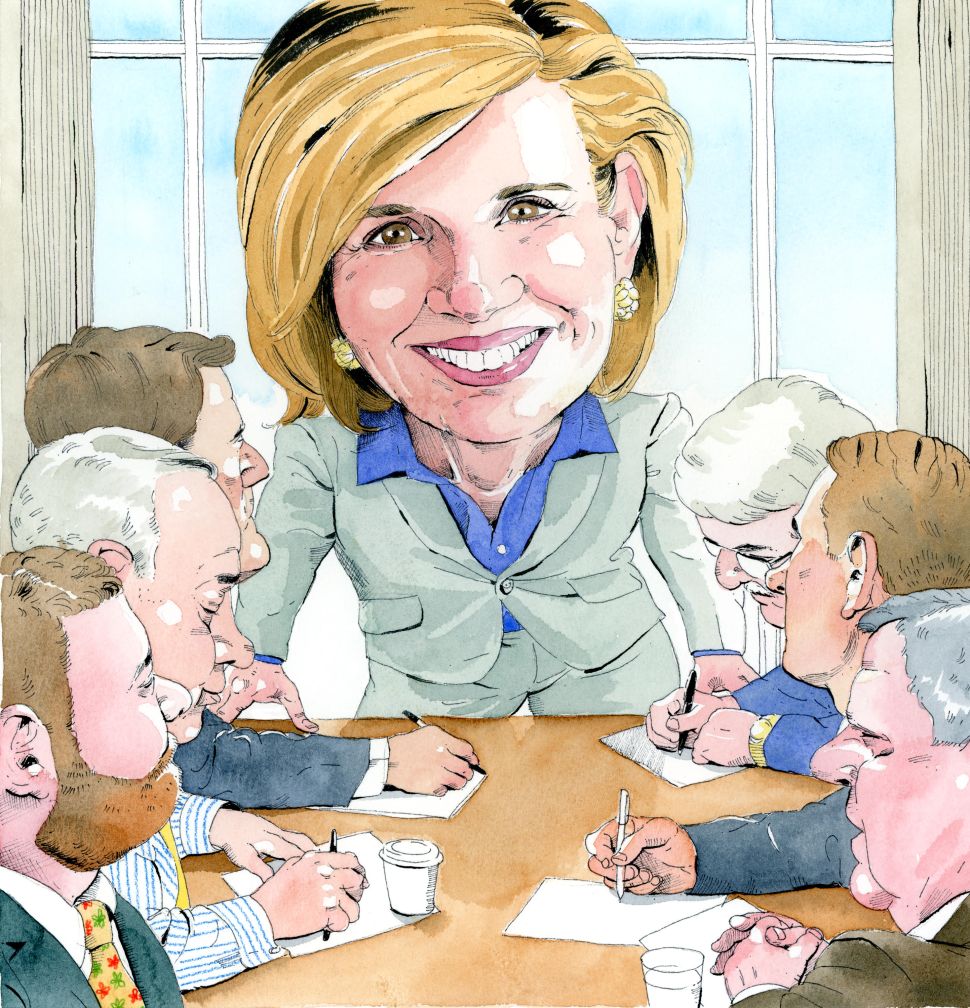