Senate Minority Leader Charles Schumer reacted with suspicion to President Donald Trump’s nomination of Court of Appeals Judge Neil Gorsuch to the late Antonin Scalia‘s slot on the Supreme Court—and warned against any Republican attempt to eliminate the filibuster in order to ram his confirmation through.

The senior senator from New York and most powerful Democrat in Washington alluded to the president’s week of jarring executive orders, which have sought to do everything from sever government funding for so-called “sanctuary cities” to temporarily shut down the country’s refugee program and bar travel from seven Muslim-majority countries. These fiats have faced and will continue to face legal challenges, which Schumer said underscored the importance of separation of powers between the three branches of government

“It is clear that the Supreme Court will be tried in ways that few Courts have been tested since the earliest days of the Republic, when constitutional questions abounded,” Schumer said in a statement to the press. “Now more than ever, we need a Supreme Court Justice who is independent, eschews ideology, who will preserve our democracy, protect fundamental rights, and will stand up to a President who has already shown a willingness to bend the Constitution.”

Gorsuch is generally seen as one of the more moderate and less provocative jurists on Trump’s shortlist, and the Senate—Schumer included—voted unanimously to confirm him to Colorado’s 10th Circuit Court in 2006. But like Scalia, he is a strict literalist and originalist, favoring a narrow reading of the Constitution in line with the intentions of the Founding Fathers, as opposed to seeing it as an elastic document that can expand to grant greater powers to government.

Before former President George W. Bush nominated him to the 10th Circuit Court, Gorsuch wrote and spoke against “judicial activism” and the perceived tendency of liberal-leaning judges to reinterpret longstanding laws as they saw appropriate. He is on the record as an opponent of assisted suicide and restrictions on campaign donations, and as a supporter of states’ rights.

On the bench, he ruled in favor of the Christian-owned retail chain Hobby Lobby in its case against the Affordable Care Act’s requirement that businesses provide insurance covering employees’ contraceptives.

Schumer alluded to all of this in his critique of Gorsuch tonight, suggesting this cast a negative light on the jurist’s ability to disentangle his views from those of the president who nominated him.

“The burden is on Judge Neil Gorsuch to prove himself to be within the legal mainstream and, in this new era, willing to vigorously defend the Constitution from abuses of the executive branch and protect the constitutionally enshrined rights of all Americans,” Schumer wrote. “Given his record, I have very serious doubts about Judge Gorsuch’s ability to meet this standard. Judge Gorsuch has repeatedly sided with corporations over working people, demonstrated a hostility toward women’s rights, and most troubling, hewed to an ideological approach to jurisprudence that makes me skeptical that he can be a strong, independent justice on the Court.”

Several members of Schumer’s 48-seat strong caucus have vowed to do just that, which would prevent a vote on the nominee. Under current Senate rules, at least eight members of the Democratic conference would have to align with the Senate’s 52 Republicans to close discussion on Gorsuch’s appointment.

But Trump has urged GOP Majority Leader Mitch McConnell to use the so-called “nuclear option”—rewriting the rules to disallow a filibuster. McConnell has so far indicated he is reluctant to take that path.

Schumer spoke gravely against it, noting that Justice Elena Kagan and Justice Sonia Sotomayor both cleared the 60-vote hurdle.

“The Senate must insist upon 60-votes for any Supreme Court nominee, a bar that was met by each of President Obama’s nominees,” the minority leader wrote. “Make no mistake, Senate Democrats will not simply allow but require an exhaustive, robust, and comprehensive debate on Judge Gorsuch’s fitness to be a Supreme Court justice.”

This statement did, however, leave open the possibility that Schumer will allow Gorsuch’s confirmation to go through without a filibuster.

Sen. Kirsten Gillibrand, a close Schumer ally who has voted against the bulk of Trump’s Cabinet picks, did not issue an official comment on the nomination through her office. Her campaign, however, blasted a fundraising email to supporters in which she said she was “ready to consider [Gorsuch] on his merits.”

She vowed, however, to oppose Gorsuch if he showed any inclination of acting like Scalia’s judicial heir.

“But President Trump has made it clear that he wants a justice who will carry on Scalia’s legacy of limiting Americans’ constitutional rights,” the email reads. “If that is the case, let me make one thing very clear: You can count on me to fight back against ANY nomination that threatens the rights of Americans.” 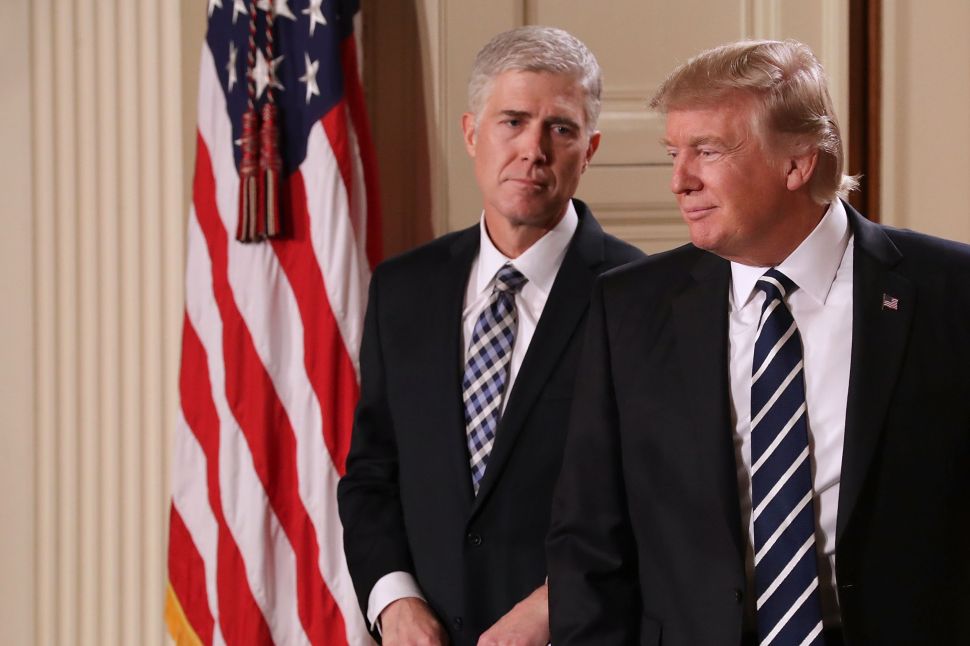