“There was once a merchant in the famous market at Baghdad…”

So begins the little fable that Sherlock narrates to open the season 4 premiere of Sherlock. Or rather, that fable would open the episode if we didn’t have a bit of housekeeping to get done beforehand.

First, perhaps the most helpful “previously on” in the history of television; after all it’s been three years since the show’s last season in which Sherlock returned from the dead, helped his friends get married, and found out his friend’s new wife was a former international assassin. Of course. And then we had the little matter of how Sherlock shot a man in the head and was banished on a suicide mission only to be called back a few minutes later because Moriarty hacked his face onto every screen in London from beyond the grave. Sherlock comes to a meeting at Mycroft’s secret government office where only the two Sherlock boys, a few officials, and a secretary will ever know that they doctored the footage to make it look like that villain, what’s-his-name-shark-eyes, was shot accidentally by a guy on a SWAT team.

And now back to that fable. There was once a merchant in Baghdad who saw this strange, surprised man, and the merchant knew it was Death. And so the merchant ran away to Samarra only to find Death waiting for him. “I know it’s my time, I’ll come without a fight, but why were you surprised to see me in Baghdad?” and Death said, “I was surprised to see you in Bagdad because I had an appointment with you tonight in Samarra,” the lesson there being one of determinism—you cannot run from your fate. Sherlock has a few fun lines paraphrasing Tom Stoppard’s Arcadia (“Septimus, am I the first person to have thought of this?) and the viewer gets the picture: Sherlock, the rational mind, will have to face off against the pre-determined.

It’s an interesting premise, but unfortunately not one done in a very interesting way. Moffit and Gatiss have had such fun taking the character of Sherlock and putting him through the metaphorical emotional-growth wringer (can Sherlock have friends? Can Sherlock be in love? Can Sherlock have a functional relationship with his brother?) that I’ve gotten hungry for the good old-fashioned case-of-the-week style episodes.

Before I go any further discussing “The Six Thatchers,” I feel as though I need to make that point about what this episode lacks really clearly. I understand why this episode looks and feels the way it does, I really do. Sherlock has been a runaway success, and is now starring two of the world’s most marketable stars. Add that with 90 minute runtime and a new season coming out every half-century and I totally understand how the show-runners instinctually veer into action-movie territory. And this episode does have a lot of nice action movie moments: we see a brawl in a swimming pool, agents repelling from the ceiling, an armed standoff in a generic Arabic country—really, all of the hallmarks of Jason Bourne. The episode’s plot too is just that, a plot, meant to advance the story of John and Sherlock and Mary, instead of the episode being centered around an interesting mystery to solve. That’s what I miss: interesting, gruesome murders that I would never be able to figure out, and then seeing Sherlock able to unravel it, piece by piece, with each of his new observations popping up in text on the screen (for all of the new special video effects this episode has, it doesn’t really do that old favorite). In those episodes, with the murder being the central, driving purpose of the episode, any character development was a delightful surprise. Now, we’re watching something of a soap opera with a bit of murder thrown in.

That’s not to say this episode is completely without cases: We get a montage, not dissimilar to the montage in “The Sign of Three,” featuring a parade of cases that sound super interesting that we never actually get to see, with only the briefest glances of John typing away at his blog that’s actually a .jpeg.

The case that ignites the episode is the discovery of a boy’s body in his car, a week old, when a week ago the boy had been in Tibet, videocalling his dad because he couldn’t be there for his dad’s birthday. While Sherlock is at the boy’s parent’s house investigating, he stumbles upon the real crime: a break-in in which the criminal stole a bust of Margaret Thatcher and smashed it on the patio. (Did anyone else find it extremely odd that the parents didn’t mention this strange, seemingly inexplicable break-in while the police were investigating their son’s death?) Anyway, turned out to be unrelated. The son died of a seizure while hiding in the car—he had faked the video call to surprise his dad for his party. The bust of Margaret Thatcher is where the REAL story is: a former assassin partner of Mary’s tracking down the A.G.R.A. flashdrive he hid in one of six Maggie Thatcher statues after a botched mission. Long story short, he thinks Mary betrayed them and now he’s escaped capture and out to kill her.

The flashdrive was a duplicate to the one we saw John destroy last season (I know, so long ago), the relic from Mary’s past that would have told John who she was. A.G.R.A. was an acronym for first names the four members of the team.

Well, that’s about all of the mystery solving for the episode. There is the last reveal—it was the secretary all along who sabotaged Mary’s mission, because she had been selling secrets and the ambassador Mary was going to save knew it!—but that hardly feels like mystery solving. Sherlock didn’t deduce anything. It was “clever” only by virtue of the “introduced and then forgotten” principle (remember how she was in the first scene but not important at all?). There were no fun observations, no interesting reveal. The lady gave us her motive and gave up the red herring in her Bad Guy Monologue.

And then the most interesting moment of the episode occurs, when Sherlock, angry and arrogant, begins deducing to humiliate the woman, and she pulls a gun, and Mary takes the bullet for Sherlock. Even if I didn’t love Mary’s international assassin subplot, that was a genuinely moving and tender moment, seeing her say goodbye to John and Sherlock, (especially in light of Amanda Abbington and Martin Freeman’s real-life split), even when Martin Freeman did what I am told is a very accurate and not at all funny Grief Grunt for a full fifteen seconds.

So, Death came for Mary Watson, who had just been trying to live a normal life but who could not escape the past (that theme was woven rather clumsily into the Secretary’s motivation). But here is why I think it’s interesting, if you’ll allow me to get meta for a moment: Sherlock is still based on the Arthur Conan Doyle stories, and regardless of how many creative liberties they take, the stories still exist pretty consistently within the framework that Sir A set up. In the stories, John’s wife Mary dies. If the characters in Sherlock lead deterministic lives, then they are lives determined by the original text. Death was always going to come for Mrs. Watson for their appointment in Samarra.

I hope that with Mary gone, the show can return to its center: an interesting character solving interesting mysteries with an everyman by his side. This was an episode of mostly filler and special effects, of fan-servicey moments masquerading as “cute,” of three and a half years of working and reworking a show until its not really what we liked about it anymore. If I had a time machine, I would forgo killing Hitler to go back to 2013 to tell Mark Gatiss that he’s not allowed to make a subplot of Mary being an assassin, and that he has to try the whole of season 3 again, but without that. If Conan Doyle is textual determinism, let’s remember that the original stories definitely had no SWAT teams rappelling from ceilings.

It was still a good 90 minutes of television. The performances were stellar and the fan-servicey moments (Sherlock talking to a baby, not knowing Greg’s name, etc) were still fun. I am, after all, a fan. No, we didn’t get any Moriarty (damn) or a real explanation of how he’s “back.” And we didn’t get any Sherrinford (although, yes, we were all right, that is the third Holmes brother’s name). Mary weirdly told Sherlock to go to hell at the end of her video to him and I’m not really sure what that was all about. And the teaser for next week’s episode is all very “this is the most dangerous man I’ve ever encountered” and I feel as though we spent all that up on what’s-his-name-shark-eyes-guy from the last season. For the literally hundreds of times Sherlock said, “The game is afoot” in different words, I never felt the fun thrill they were obviously going for. The dog was pointless. But still. It’s Sherlock, and he’s back. And all things considered, I’m looking forward to next week.

Wait. What the FUCK was up with John sexting a random bus girl? I was cringing into my pillow the entire time. Come on, Martin Freeman, you’re better than that. I get that Moffatiss was going for unresolved tension, that Watson would have this guilt that he never got to work out with Mary and that he’s now projecting on Sherlock, but that is utter bullshit. John Watson was a motherfucking Hufflepuff his entire life and if his wife is home with a newborn baby he sure as hell would not be sending dick picks to some Zooey Deschanel wannabe he met on the commute. Sidenote: buddy, your wife is a trained assassin and your best friend is a genius detective. What in gods name did you think you were doing with your little “sneaky” texts? How did Sherlock not smell this on you from a mile away? I hope that’s the end of all this. 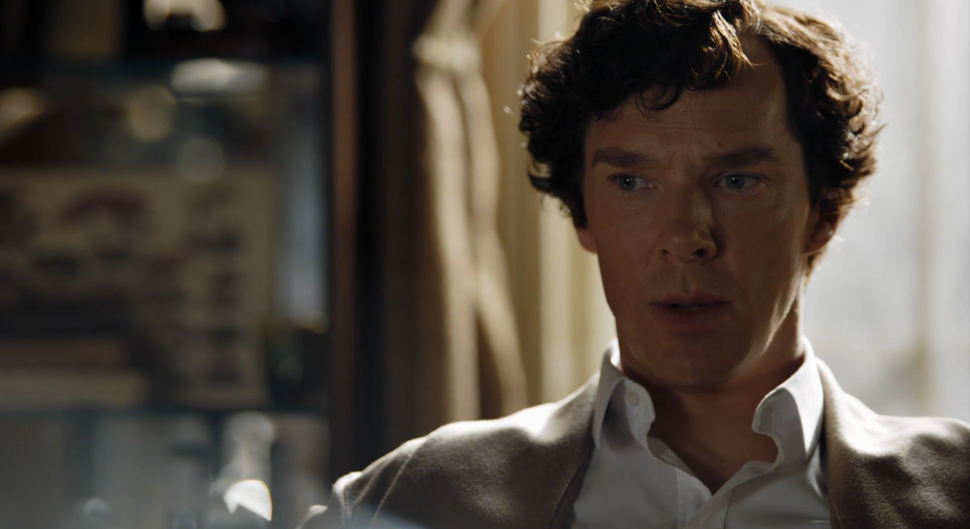