The very first episode of Sherlock, “A Study in Pink,” ends with Sherlock in a face-off with an aging cabbie who’s been enlisting his passengers in a deadly game of wits (feels like forever ago, doesn’t it?). The cabbie offers Sherlock two pills—one deadly, one harmless—and a choice. So far, everyone else who has played the game has lost. Sherlock is confident he’ll be able to win. He is inches away from placing one of the white pills in his mouth when a gunshot rings out and the cabbie is shot by John Watson, who’s watching in from the building next door. The audience never learns whether or not Sherlock made the right decision, or how he would have deduced which pill was the harmless one, or how every single player in the cabbie’s twisted game lost when the odds should have been 50/50. We don’t even know whether Sherlock actually intended to take the pill, or if it was an elaborate gambit. Instead, we got an interesting, high-tension scene, a surprise gunshot which ends the intellectual game, and telling actions from both of the show’s protagonists: John Watson is the soldier with a steady hand who does whatever it takes to save Sherlock, and Sherlock is the impulsive egoist who’ll risk his own life to prove a point. We never get the answer to the cabbie’s riddle, nor do we get a wholly satisfying reason for why he was engaging in his creepy Princess Bride gambit in the first place (so, Moriarty was paying him money he needed to give to his children because Moriarty… wanted to do something fun and tricky as a game for Sherlock. All right, then). The satisfying resolution was never the point: the point was the emotional stakes, the adventure, and the friendship between John and Sherlock.

I bring this up because the pilot, which aired first in 2010, represents an idealized version of Sherlock that I (along with many other fans) found myself nostalgic for in the wake of a more James Bond-style detective whose storylines began to focus on more convoluted, action-movie mysteries as he leapt, fists at the ready, from inexplicable set piece to inexplicable set piece.

When Sherlock premiered, it was brilliant and it was new: it pioneered the now-ubiquitous strategy for showing thought, and text messages on screen (a tactic that’s been parlayed by shows ranging from House of Cards to The Mindy Project). Sherlock was also the first time many of us in the United States were exposed to Benedict Cumberbatch and his glorious cheekbones. Sherlock was quick, it was new, it was intelligent, and starred a bevy of attractive British men—all factors which contributed to a massive and incredibly devoted fan base. (It should also be noted that the first episode featured a fun surprise turn in which an estranged brother turned out to be an estranged sister.)

But creating three film-length episodes with an intricate plot that straddles the difficult balance between a satisfying case-of-the-week and interesting emotional development takes time, especially with the show’s two stars becoming incredibly marketable and very, very busy. What began as a passion project for two men obsessed with the works of Sir Arthur Conan Doyle spiraled happily into an international phenomenon with a multi-year waiting period between episodes during which eager fans, especially after Season 2, could cannibalize their expectations and every Sherlock gif in existence like a Tumblr ouroboros. What emerged was a fan base with such a possessive attitude of ownership towards the material that, short of a miracle, there would be nothing Gatiss and Moffat could create that would be universally satisfying. This finale represents a fitting end to the foundation of the show that had been there all along, even if we the fans had put up new moldings and installed new floors.

This is not to say that there isn’t plenty to criticize about “The Final Problem,” (because, oh, dear lord, of course there is, and I will get to that) or that fans aren’t entitled to criticize a show they love (because, if not, then what, pray tell, is even the fun of being a fan?) but I feel as though there it’s impossible to review an episode of television show if we aren’t even sure what that television show as a whole is supposed to be. In terms of plot cohesiveness, this episode was sorely lacking: I could spend the rest of this article discussing exactly everything that doesn’t make sense in Eurus’s (or was it Moriarty’s?) plan—how did she get Watson chained to the bottom of a well? How did Watson get out when they just threw him a rope instead of unchaining him? How did Eurus and Moriarty plan all of this in five minutes when Moriarty presumably had to spend most of that time recording train sounds? More qualms to come—and yet, that feels like a hollow way to evaluate what might be the final episode of Sherlock.

Over the previous four seasons of this show, I hated the subplot about Mary as an international assassin and Sherlock as a druggie; I loved the clever self-congratulatory lines, the intricate camera angles, and every single goddam moment Moriarty appeared on screen. Like any show that’s attempted to reinvent itself to stay interesting and relevant, some episodes have been mediocre (most of Season 3, episode one of Season 4), but most have been wonderful. Even in the weakest episodes, there were fantastic moments and memorable lines. Through thirteen full-length episodes, I can say I was almost never bored.

Yes, “The Final Problem” was a completely disjointed episode filled with wonderful and interesting moments that never fully added up to a cohesive whole and yet, I completely enjoyed watching it. I was surprised, I was scared, I was exalted, emotional, relieved.

If you believed the last montage to be acquiescent fan-service, consider this fan duly and happily served. Sir Arthur Conan Doyle was never meant to be read as high-literature: it is meant to be consumed and enjoyed. Like it or not, Sherlock was always fan-service (first to its two creators, those devoted fans of the original stories; and then to the fans of the show itself).

There was no other possible ending on which the series could have possibly landed. The character of Sherlock Holmes exists in the cultural iconography—it doesn’t belong to Mark Gatiss or Stephen Moffat or the BBC. They were humble enough to return Mr. Holmes to his rightful stasis: solving mysteries from his flat at 221 Baker Street, with Dr. John Watson by his side.

If you enjoyed the episode, feel free to leave the review here. I agree with you—on a pure, lizard brain level, I really, really enjoyed it too. But, because I am a professional asshole on the Internet, of course I could make a hundred snarky and specific qualms and opinions about the episode and I’m going to, down here, because it’s fun. 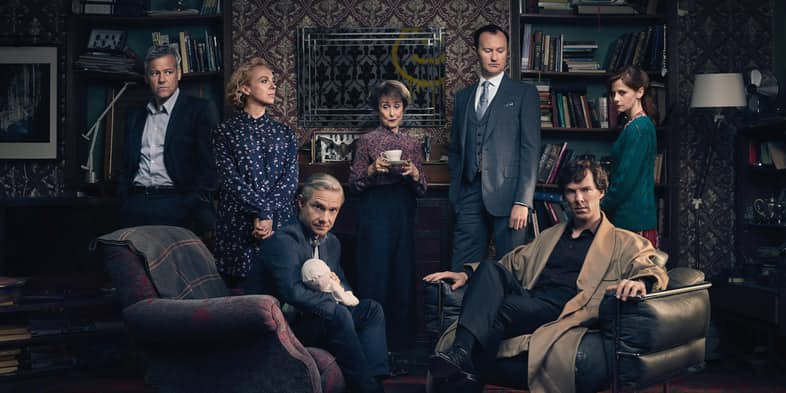