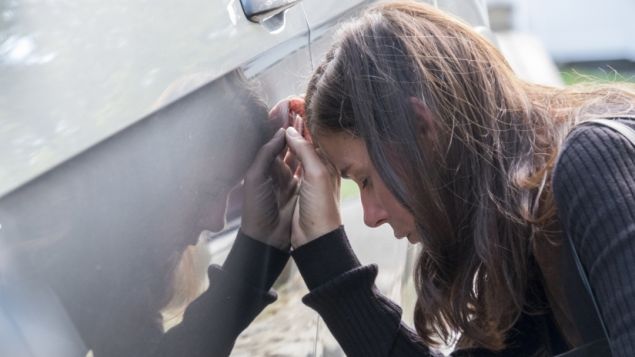 Maura Tierney as Helen on The Affair. Via Showtime

Welcome to our TV Fashion column, where TV Ate My Wardrobe‘s Emma Fraser discusses the trends in television apparel. This week: The Affair!

Different perspectives on The Affair delivers versions of events that come from unreliable narrators and season1 dished out a long game of “Spot the Difference.” This could be anything from chunks of dialogue – big or small – to costuming/hair styles with subtle and extreme changes taking place to emphasize how our experiences of events can vary. In one version Helen’s party dress tells a story about her privileged background while in another it offers a sense her homeliness and the lack of spark between a married couple.

While this side of The Affair hasn’t completely gone away as we saw a few episodes ago at a birthday party for Cole and Alison’s daughter, replaying the same events from the different point of views is no longer what pushes the narrative.

Instead there are now five different POVs at play and characters like Helen and Cole have so much more agency than they previously did when it was only Alison and Noah’s versions of events at play. Costume continues to tell its own part of the story and for Helen there is a whole lot truth revealed in the pieces that put together this external appearance of being okay and the wealth she comes from.

Last season in the fourth episode after Helen and Noah’s divorce proceedings got super messy Helen got drunk while listening to anthemic “Changed the Locks” by Lucinda Jones. Wearing a bra and Spanx singing into her glass of wine like it is a microphone made this an incredibly freeing moment for a character that tends to hold it all in emotionally whether it is good or bad. She just so happens to be wearing a garment specially designed to do that and Maura Tierney’s performance is incredibly refreshing in its lack of vanity. Helen is a sad and angry mess, but the solace found in singing and booze is incredibly relatable and control underwear isn’t just a punch line piece of clothing.

Later in the same episode Helen gets high before having her hair done forgetting she is on kid picking up duty; when she does realize she rushes to collect them with foils in her hair and the inability to drive properly resulting in a DUI. All the tweaks that are meant to make us look or feel more put together in both these cases reveal vulnerability and Helen’s control freak exterior is broken.

Cut to this season and she is still at war with herself and the Noah situation, but this time she is not the wronged woman and the guilt bubbling to the surface comes from her involvement in the crime Noah was imprisoned for. What looks like blind faith toward the man she was with for nearly 25 years is actually the knowledge that she was the one behind the wheel and self-destruction looms.

Sex is obviously a big part of The Affair and so far this season there have been hook-ups between characters that used to be together – Cole and Alison, Alison and Noah – but are now either in relationships with other people or it is just far too messy to contemplate a reunion. Alison and Noah spent an intimate day and night together catching up, stripping to nothing while lounging in a hot tub of a stranger and then sleeping together once again. Souls were unburdened and it revealed why they were originally drawn together in the first place and this level of relationship insight is something Noah and his original wife lacked. Everything appeared fine on the outside; the house, kids, comfortable life and yet there was much deeper pain being ignored.

Four years on from the end of her marriage and twenty five years after they first got married, which is a milestone Helen is all too aware of and Helen is now looking for someone to take her mind off the guilt that is eating her up inside. A visit to Noah’s sister, Nina intensifies everything she hates about herself or fears about her situation with Noah; her privilege, narcissism, why he was originally attracted to her, whether she ever really knew him and the matter of him going to prison for her. After receiving none of the reassurance she was hoping for here Helen’s next port of call is to ‘casually’ drop in on the person who has had a forever crush on her. The same person she started seeing after the Noah break up and this is meant to give her an instant confidence boost.

But what happens when the guy who is your feel good fuck has also moved on? Well you seduce him and spread those guilty feelings around. Sex on The Affair like a lot of sex on cable TV involves a whole lot of nudity and one of the notable things about nudity on The Affair is that it is equal opportunities. In the season 2 premiere we got to see all of Max, but on this occasion as Max packs up his old bachelor life before getting married not a single item of clothing is shed during this instantly regrettable indiscretion. Once again the person Helen has gone to see doesn’t sugar coat their feelings and Max won’t further indulge Helen’s insecurities or guilt.

This is all from Helen’s POV and like much of The Affair it is impossible to tell how much of this is imagined or what kind of emphasis there really was on certain words. All we know is that Helen is currently on a path to self-destruction as she pushes away the current guy in her life by claiming how little he knows about her life despite being together in one way or another for four years now. It also doesn’t help that her parents have reunited despite how terribly her father treated her mother and Helen seems to be itching to repeat her own mistakes with her ex; she believes her archetype is as a caregiver, but this is only the case if this means repressing the feelings that are actually there and ignoring them into submission.

From the outside Helen has everything and she is still looking very much put together; her hair, expensive clothes and ankle booties all paint a picture of relaxed privilege and yet the messy version who got drunk in her underwear and arrested in hair foils is bubbling beneath the surface just waiting to break out. How long before Helen cracks and yet another truth comes out on The Affair? 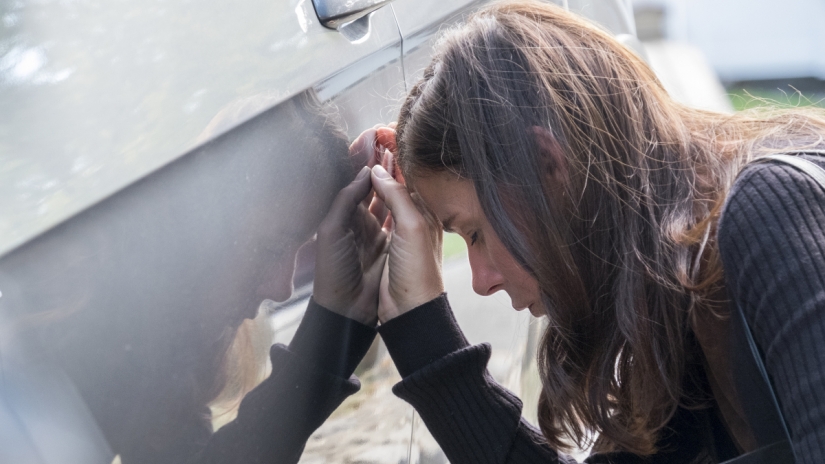