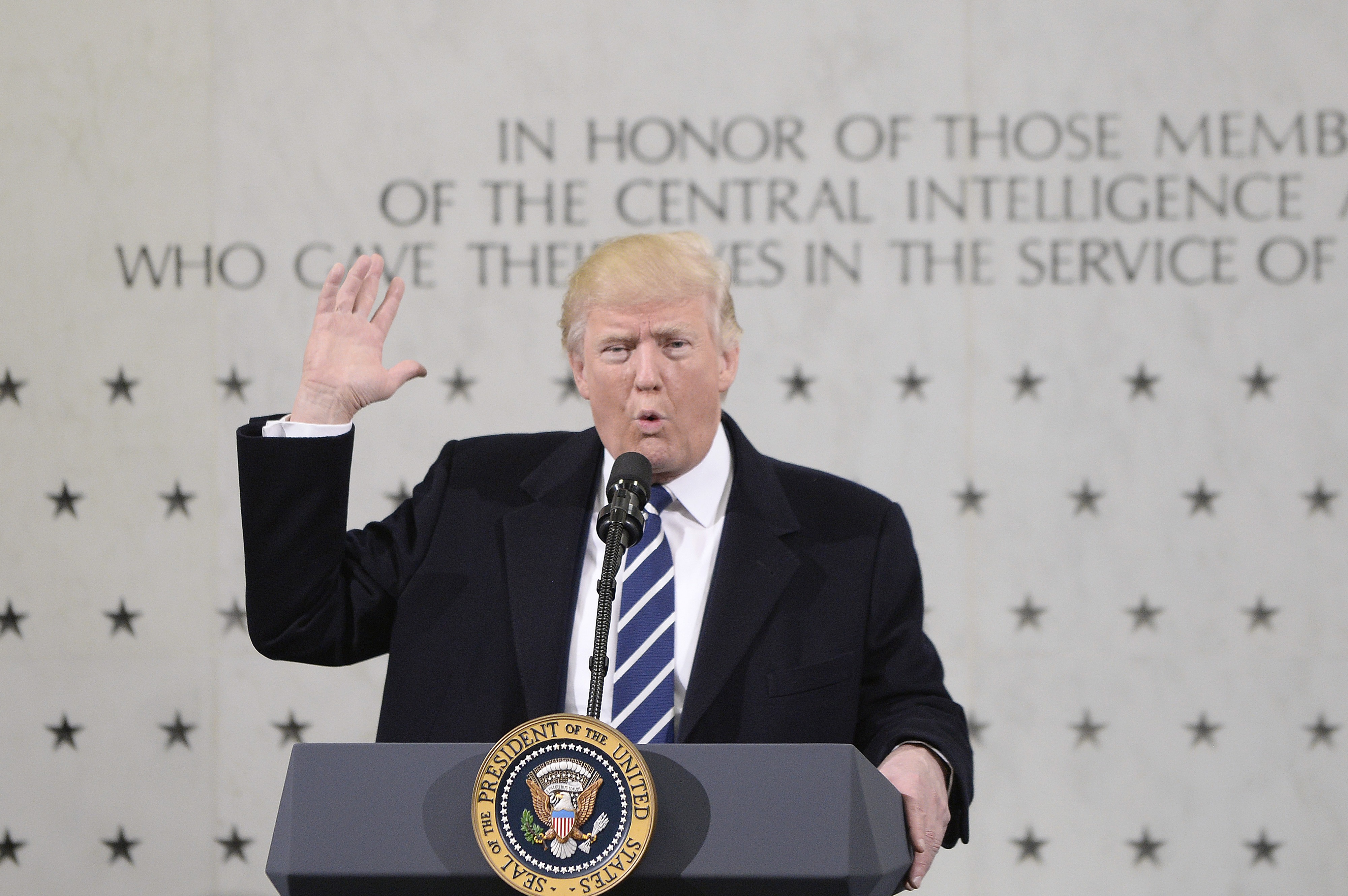 At CIA headquarters on Jan. 17, Trump said the ‘dishonest media’ made it appear he was having a feud with the intel community. Olivier Doulier-Pool/Getty Images

President Trump has gotten off to a rough start with the intelligence community.

The day after being sworn in, Trump spoke at CIA headquarters in an apparent attempt to mend his relationship with the agency. The relationship was frayed in large part due to Trump’s skepticism about an intelligence assessment that suggested Russia had hacked into the emails of the Democratic National Committee and Democratic presidential candidate Hillary Clinton’s campaign.

Where did this skepticism come from? Trump – along with some security experts – has expressed doubt about the complexity of cyberattack attribution and the reliability of the intelligence sources. This skepticism seems to be fueled by the desire for irrefutable evidence of Russia interference in the election.

At Georgetown University, I study and teach how the intelligence community collects, analyzes and circulates sensitive information to policymakers and elected officials. I’d like to point out some of the misunderstandings about intelligence activities exhibited not only by the new president, but in the media coverage of the Russian interference in the presidential election of 2016.

Correcting these persistent myths is important because they set unrealistic expectations about intelligence production and analysis. These false expectations could damage the credibility of the U.S. intelligence community and its ability to fulfill its mission.

Myth #1: Intelligence and evidence are the same

Intelligence and evidence are starkly different.

Intelligence analysts are tasked with understanding situations that are often multifaceted, forming a judgment about that situation and informing policymakers.

On the other hand, law enforcement investigators produce evidence required to meet legal standards of the burden of proof. In a courtroom, direct proof of a crime – such as DNA, fingerprints, witness testimony or a confession – is the best evidence.

In the intelligence community, analysts have to deal with foreign intelligence agencies and terrorist groups who have the ability to use counterintelligence measures and disinformation campaigns to deceive U.S. intelligence officers and create uncertainty.

It would be unrealistic to expect intelligence agency to always provide “fully proved evidence” in their assessment.

Another reason people are skeptical of intelligence is the lack of explanation on how analysts draw their conclusions.

For example, the Office of the Director of National Intelligence declassified a report on Russia’s role in influencing the U.S. election in early January. In response, Robert Graham, an analyst for a cybersecurity firm, told Wired: “Knowing what data they probably have, they could have given us more details. And that really pisses me off.”

Susan Hennessey, a fellow at the Brookings Institution, sent out the following tweet in response to the report.

The unclassified report is underwhelming at best. There is essentially no new information for those who have been paying attention.

But these criticisms are misguided, in my opinion. The techniques used by the intelligence agencies must be kept secret to avoid revealing U.S. methods and analysis capabilities to our adversaries.

Myth #2: Intelligence can predict the future

Former President Barack Obama has been criticized for not releasing detailed intelligence assessment about the Russian hacks before the election. Some have said that the intelligence community should have warned the public – sooner and more forcefully – about the impact of Russian interference.

But these criticisms can be attributed to 20/20 hindsight and illustrate the myth that intelligence officials can somehow predict the future.

Despite all the technology available to the intelligence community, we are not yet in the scenario of the movie “Minority Report,” in which special units prevent murders seconds before they happen with the help of psychics and visualization technology.

Here’s what they can do. Intelligence agencies produce what is called “national security estimates” which represent an combination of analysts’ opinions. These are rated on a confidence level scale that varies from “almost no chance” to “almost certain.” The rating is based on the quality of information, depth of analysts’ knowledge on the issue, the credibility and reliability of the sources used to produce the intelligence and the ability to corroborate with other sources.

In other words, intelligence estimates are carefully weighed against rigorous criteria to ensure validity and credibility of the assessment. Even so, intelligence agencies deal with plausible scenarios, not predictions.

Perhaps surprisingly, approximately 80 percent of the intelligence used by security agencies is not secret and does not require covert operations.

There are two main challenges with “open source intelligence.” Sometimes the information needed isn’t available in digital format, and sometimes it’s not in English.

These limitations may sometimes trigger covert operations. But in the majority of cases, intelligence estimates are rather dry reading that includes little bombshell information.

Myth #4: The intelligence community is mainly composed of spies

Since intelligence requirements can be addressed through open sources, the need for spies is relatively low.

Only about 10 percent of the employees of the CIA are covert operatives.

In the United States, approximately 5.1 million people have security clearance to handle sensitive information. Among this group, 1.4 million received a “top secret” clearance.

“Top secret” is not the most secret clearance. There are also an unknown number of individuals that carry clearance above “top secret” such as “sensitive compartmental information” and “special access programs.”

Such “crowded intelligence environment” increases the risk that sensitive information gets released intentionally or unintentionally.

It has been reported that, during the Obama administration, this document was seen by more than 30 people, including senior intelligence analysts, White House senior advisers, department secretaries and selected ranking members of Congress.

Despite the number of reviewers, the intelligence community had daily access to Obama for the briefing – something that, so far, President Trump has withheld from them.

Frederic Lemieux is a Professor and Program Director of the Master’s degree in Applied Intelligence at Georgetown University . This article was originally published on The Conversation. Read the original article. 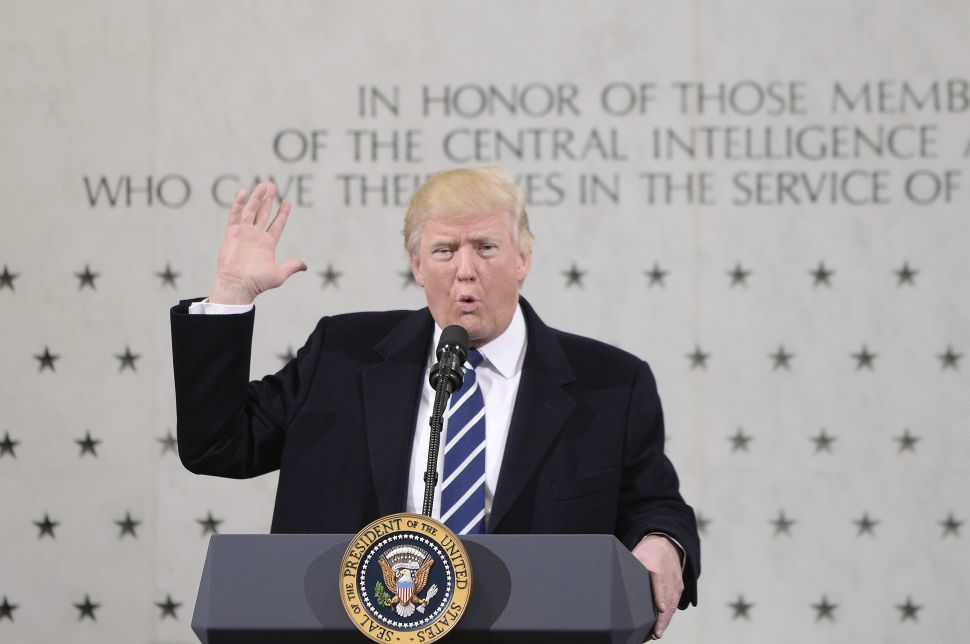