Leadership can’t be faked, but it can be hacked a little.

Michael Lopp has worked for Apple, Pinterest, Peter Thiel’s shadowy intel company—Palantir and now he runs the engineering team at Slack, the cloud-based intranet service. It turns out that this high level tech exec also likes playing Destiny, the first person shooter from Activision. Playing online has taught him a lot about leadership, because it encourages the kind of teamwork that requires someone to take the helm. In certain Destiny multi-player modes, if there’s no one making decisions, everyone dies and no one has fun.

But playing in groups means playing with strangers, and “the internet is full of… colorful people,” he said.

Yet Lopp has watched the leader of the group he plays with and found that he never loses patience with anyone that joins them on a mission. That’s inspired the latest leadership shortcut Lopp is using with the nearly 200 engineers he manages at his unicorn employer.

Lopp offered this new tip as the last in a long list that he presented at Calibrate 2016, a one-day conference in San Francisco to mentor engineers into leadership roles. Sharethrough published his September presentation Thursday on YouTube.

Lopp explained that he has been in leadership roles for 20 years, first at Netscape, the once dominant internet browser (which lives on in the heart of Mozilla’s Firefox). He has realized that leadership is really an “impossible job,” because you have a million problems to fix and dozens of people looking to you to fix them.

“You are greatly outnumbered by chaotic, beautiful snowflakes,” he laments. “There’s too much to do. There’s far too much to do, and their expectations of you are unattainable.”

So he’s collected a series of what he calls “hacks” that help him do better work as a leader. On one of his slides, he defined a hack this way (emphasis his):

He added, “and it kind of feels like cheating.” Some of the best tips from his talk follow:

Arrive two minutes early to everything

At Apple, he says, there’s a joke about “Apple Standard Time,” which says that every meeting starts ten to fifteen minutes late. He surmised that this originated with some executive long ago who showed up to meetings late, so teams learned it was okay to be tardy. This rippled out throughout the company and became part of the culture. It’s funny and it’s cute, but, as Lopp points out, “This is bad. Why is this bad? Because there are six people sitting there who got there on time that you’re paying… to read Twitter.”

“Curate the appearance of availability.”

He won a lot of credibility when he started at Pinterest by meeting with everyone on his team in one-to-one meetings or in small groups. It created a sense that everyone could talk to him, but it took him months to get through them all. So he scaled this better at Slack by creating office hours every two weeks that anyone could sign up for. While the times always fill up, the practice also creates a sense of accessibility for team members who never take advantage of the time slots.

Do one-to-one meetings every week

One-to-one meetings are open-ended, strategic conversations with one person on your team. They aren’t goals check-ins or task management, but focus on broad topics, such as the vision for a product or feature, leadership development or cultural troubleshooting. He promised these meetings provide “incredible signal about your team.”

Keep these meetings. He asked, “The moment you have a one-on-one with your boss, and she cancelled it or she moved it, your reaction was what? You’re not important.”

Writing down three questions in advance helps if a meeting isn’t coming together. He doesn’t use the questions if the meeting seems to be working on its own. If it’s not, though, they always help him to get the conversation going.

Fix some small problems all the time

“What I like to see out of leaders is they are constantly thinking: ‘Where are the small bugs?’ And how are they fixing them,” he said. “I guarantee that you are undervaluing the compounding awesomeness of continually fixing small things.”

Every team leader at a tech company will have key metrics that they should be keeping an eye on. It could be things like active users, job applicants, conversions or weekly downloads.  “There’s a set of numbers in your business that are incredibly important,” he said. “Having those ready is going to speed things up.”

At Palantir, he said, they actually had a term called “Rumint,” which stood for “rumors intelligence.” Rumors form when there are gaps in information about topics that people care about. When companies grow rapidly, those gaps start to form quickly and the gaps turn into gossip.

One time at Pinterest their CEO accidentally sent out the meeting notes from an executive meeting to the entire company. There was nothing damaging in it, but these notes normally only went to the executive team. It made the staff so happy to see them that the CEO started distributing their notes every time.

Buffer, the social media optimizer, has gotten out of the startup phase in part by leaning into transparency.

Do open postmortems on your own mistakes

“This hack is one of the biggest differences between a leader and a senior leader,” he said. Mature leaders are better at admitting that they screwed up openly. They also excel at explaining how they came to the wrong decision, what they learned and how they are going to fix it. “Which is, by the way, every postmortem you’ve ever been through,” he said.

New leaders think a mistake is going to get them fired. “This is the thing about Silicon Valley: failure is learning,” he said.

“Freaking out does no one any good,” he promises. When there’s a disaster on his team, Lopp described himself as “walking about as the sky falls with a smile on my face.”

He said, “The sky falls every two weeks. It’s how I know I’m alive.”

Lopp has written two books on topics like this, Managing Humans and Being Geek. He has also posted his own explanations of five of these hacks on his blog.

He closed the talk with a bit of reassurance, saying, “I was joking. Leadership is totally possible.” 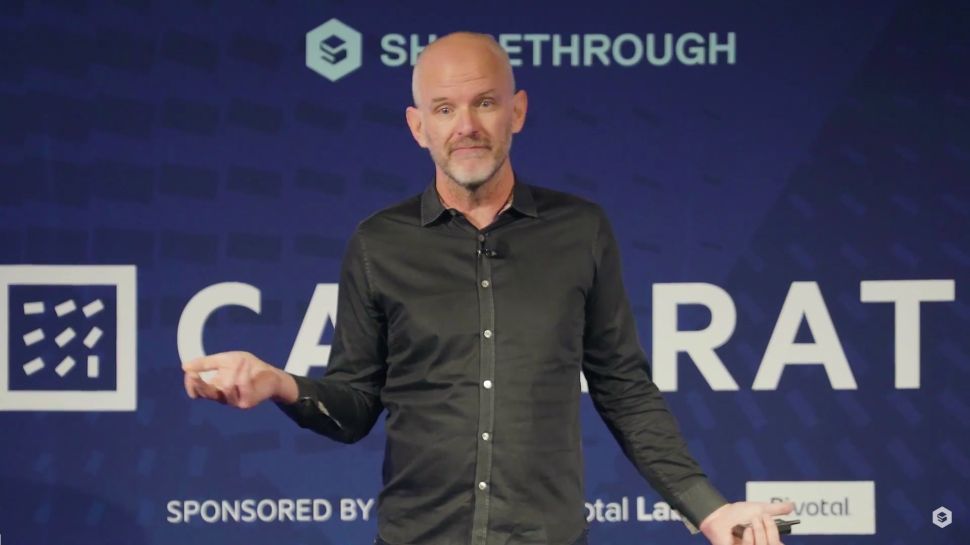