I blame Rolling Stone for a lot of things. I could provide a long list, but that would certainly involve me unfavorably comparing Dave Grohl to Tico Torres.

But here’s something that really bugs me about Rolling Stone: at some point they decided that Great Britain was only of interest to their Lenny Kravitz-and-Pearl-Jam-befogged readers if Kurt Cobain happened to mention it in passing during an interview.

I’m not entirely sure why Rolling Stone went in this direction, though I have some theories. Perhaps it began as a defense against the onslaught of British accents in the early days of MTV, coming on the heels of a British punk movement that Rolling Stone’s Skunk Baxter/Timothy Schmidt-centric sensibilities despised more than the Geico Gecko hates cats. I can imagine these fine and talented gentlemen shaking their heads and going, “But they don’t have chops! They haven’t paid their dues!” Man, I can totally see that conversation, can’t you? Pass the dust, I think I’m Henley.

Or maybe it was the prevalence in the early 1980s of Human League-type synth bands that must have so deeply offended Waddy Wachtel and Max Weinberg. Of course, exceptions were made, mostly for Bono and U2, and sometimes for The Edge as well.

Rolling Stone’s Anglophobia changed America’s dialogue about the story of rock and pop, and not for the better. Before long, this perspective spread to the formerly open-minded precincts of FM radio. 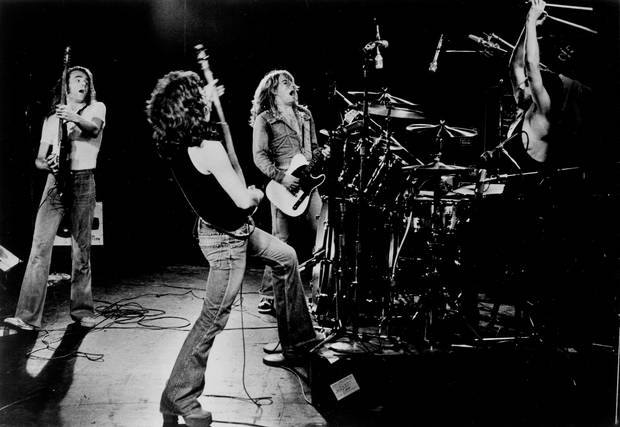 Status Quo are legends in the U.K., but you’d hardly know that in America, thanks to Rolling Stone and the Rock and Roll Hall of Fame. Facebook

Once upon a 1970s time, FM had been very friendly to all manner of British acts, including those who weren’t big sellers: Who else recalls hearing Gentle Giant, Wreckless Eric, the Strawbs or even the godlike Hawkwind on mega-wattage, major-market FM radio stations? But by the middle of the 1980s, the collapsing star of open-playlist FM radio had fallen into lockstep with the party line, with exceptions made for those Keith Forsey-produced hits and all that kohl-eyed sobbing to be heard on the big “Alternative” stations.

By the peak of the Nirvana era, Rolling Stone routinely dismissed anything that sounded British and didn’t clearly belong on a mixtape Cameron Crowe would have sent Dave Marsh for Christmas (are these references too obscure for you? I think they’re pretty standard, and it’s not like I am alluding to the Jewish Autonomous Oblast or anything like that. I figure a “Dave Marsh” reference is more oblique than, say, a “Second Darrin” reference, but probably a bit more familiar than a “John Corabi” reference. But, ahhh, is a “Second Darrin” reference and a “John Corabi”reference the same thing? Now, a few paragraphs back, “Pass the dust, I think I’m Henley,” that was good and obscure).

See, when there was a lot of rock media—oh, Creem, Trouser Press, Christgau-era Village Voice and even old-school Spin—there was a generally warm and fuzzy notion that rock was American and British (and sometimes Canadian and even occasionally German). There wasn’t this big, floppy idea that rock could only come from the same country Chicago and Little Steven came from.

Some of the biggest bands in the Western World have flown under the American radar, and that sucks. Perhaps none of these omissions is more bizarre or more jarring than Status Quo.

Status Quo were a wonderful and utterly mainstream rock band who filled stadiums in their homeland year after year and decade after decade; yet they couldn’t buy a Fribble in the United States with five bucks and an iPhone that had the words “Find Friendlys Near Me” typed into the search box (search box? Is that what they call those things? In any event, Search Box is a pretty decent name for a band).

Status Quo are such an institution in the U.K. that in 2010, band leaders Rick Parfitt, who passed away December 24 at age 68, and Francis Rossi stood in front of Queen Elizabeth II (Americans may know her as someone portrayed by Helen Mirren and, more recently, the saucy and slightly geeky Claire Foy) and were awarded the OBE—that is, they were made an Officer of The Most Excellent Order of the British Empire (not a Wayne’s World reference, that’s really what it’s called).

Status Quo’s New World obscurity might make sense if they were one of those English bands who were all “Bob’s Yer Uncle!” and “Beans on Toast!” and “I Heart Tommy Cooper and Vera Lynn!” or if they were hopping around dressed like Stanley Holloway in My Fair Lady and singing “My Old Man’s A Dustman.” If that was the case, we could understand why America chose to ignore them.

But that is not the freaking case at all.

Status Quo’s music is supremely commercial and lovable, and it’s exactly the sort of stuff that should have been a total staple of FM radio in the 1970s and ‘80s (not to mention all those bloody Sirius classic rock channels that always seem to be playing Jethro Tull or “Sweet Emotion” whenever I turn them on).

But let’s get this out of the way: In the United States, Status Quo are known primarily for only one song, 1968’s “Pictures of Matchstick Men.”

Get this straight, America: that track is a psychedelic oddity Quo released at the very beginning of their career, and it bears literally no resemblance to the sound that later made them one of the biggest acts in British rock history. To associate Quo only with this one song would sort of be like thinking that the only song Pink Floyd ever recorded was “See Emily Play.”

So, if Status Quo (oh, and the Brits pronounce it STATE-us, as in Hate Us) became one of the biggest British bands of the last five decades with stuff that doesn’t sound anything like “Pictures of Matchstick Men,” what did they actually sound like?

It’s like a slicker version of the boogie that Dave Edmunds and Rockpile were so good at, and in that sense, it’s occasionally reminiscent of Bon Jovi covering the early Flamin Groovies, if you can wrap your mind around that; which is all to say it’s not too far from Steve Miller, not too far at all, no siree, I mean if Steve Miller mostly covered Dr. Feelgood or very early Stones; or you could say it’s like some cross between Canned Heat and Badfinger; or perhaps I would venture that Quo sounds a lot like a lacquered up interpretation of Peter Green-era Fleetwood Mac. 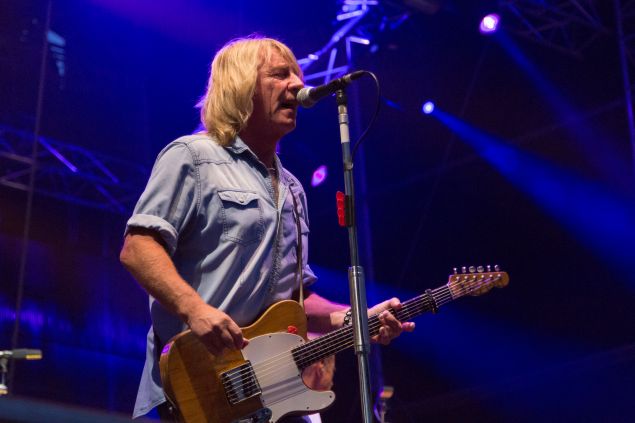 And we are here not just to say all this, but also to sadly note that on the day before Christmas, Rick Parfitt, co-guitarist and co-leader of the mighty Status Quo, left us at age 68 for a different Boogie Bardo.

I can tell you the exact moment I fell in love with Status Quo, the minute that their head-out-on-the-highway-and-roll-right-past-Needles-while-doing-110-mph ramalama brought me to a state of transcendence.

In 1985, I was working for MTV News. In this capacity, I found myself standing on the wide turf of JFK Stadium in Philadelphia, awaiting the start of Live Aid.

It was precisely 7 in the morning (we had been at the venue since 5 a.m.), and the high, new sky was astonishingly clear, tall, and a blinding blue-white. The doors to the venue had just opened, and the field was beginning to fill with people. The enormous P.A. and video screen cracked and whacked into action with a sibilant burr and a sub-bass crunch, getting ready to simulcast the concert that was about to begin at London’s Wembley Stadium (the live music in Philadelphia wasn’t going to start for another five hours).

At this fairly ungodly hour, on this remarkable hot squint of a day, I heard a voice come over the P.A. from 3,539 miles away: “AND now, to start the 16 HOURS of Live AID, would you welcome STATUS QUO!”

And in a breath, Quo tickled and tripped their way into the downbeat ecstasy of “Rockin’ All Over The World,” the John Fogerty song that had been one of their very biggest hits.

On that morning, Status Quo sounded like an interstellar bar band on a voyage somewhere between Abbey Road and Austin; they were so full of joy and chug and a pure boogie-burping simplicity that they were directly connected to Eddie Cochran and Fats Domino and the Beatles in Hamburg and the Clash and the Cramps. It was like Status Quo held in their hands a ball of yarn that knit together every person on earth with the power of rock ’n’ roll.

I have seen many moments when artists reached off the stage and electrified my spine and made the goose bumps rise.

I have seen bony Pete Townshend airborne. I have seen Elvis Che Strummer eyes screwed shut. I have seen 21-year-old Michael Stipe spinning like a top, and rooster Mike Monroe balanced from a ceiling pipe. I have seen Young Marble Giants freeze a room with the power of their quiet bomb. I have seen the Fall summon the spirit of Johnny Burnette and make him speak in Tristan Tzara’s tongue. I have seen Stiff Little Fingers crawl up imaginary ladders and shriek through the walls. And I have seen Glenn Branca and his muffler-dragging guitars demand that the devil crawl at his feet. But never, not ever, did I see a more pure moment of rock ’n’ roll than Status Quo at Live Aid.

If an alien, transparent except for a glowing olive green aura and no higher than my knee and communicating wordlessly and distracting me from a Perfect Coffee Shop Tuna Melt sidled up to me and said, “Stranger, show me rock ’n’ roll,” I know exactly what I would do: I would play him/her/it “Bo Diddley” by Bo Diddley and then I’d show them Quo’s first song at Live Aid, and I’d say, “Get the picture, friend?”

So listen to “Rockin’ All Over The World” and listen to “Down Down” and “Caroline” and “Whatever You Want,” too, and maybe even “Roll Over Lay Down,” and you will pretty much get it.

Status Quo aren’t that hard to grasp, they just do their thing, and they never get too deep or too metal or too soppy or too trippy or too solo-y. Quo are, well, just Quo. They play boogie and they play it clean and they sing loud and clear and tunefully, and you know what, there’s a place for that in our world, even if Jann Wenner never heard of them and Dave Grohl never jammed with them and G.E. Smith never played any of their songs.

Oh, and they also have an album called In Search of the 4th Chord, which would have been the best Ramones album title ever.

So godspeed, Rick Parfitt. And God save Status Quo. 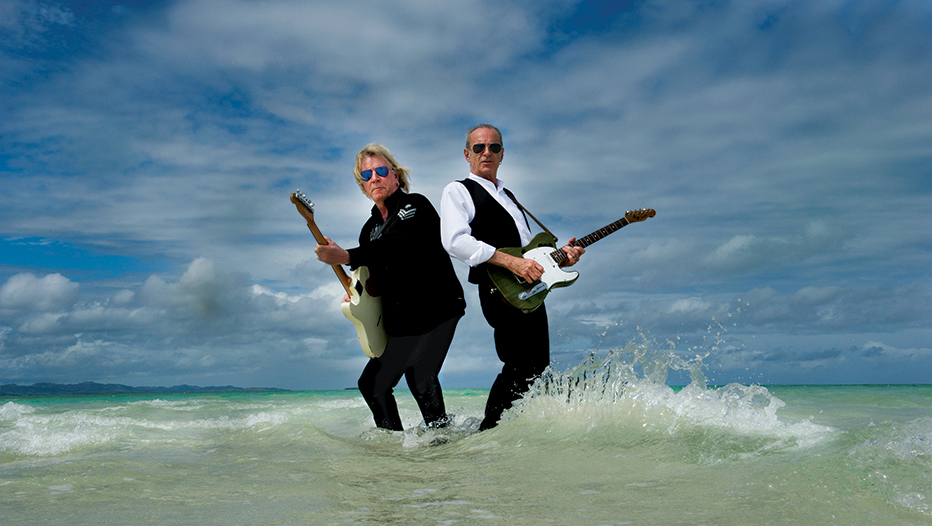